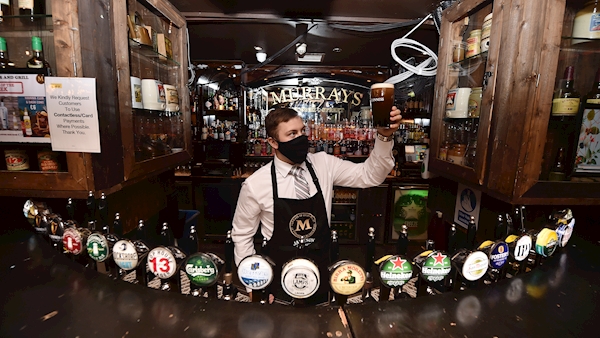 Pubs in Dublin could remain closed past the 21st of September due to rising cases of Covid-19.

Some pubs are currently open across the country, but only if they serve food as well. Those that only serve alcohol are due to the reopen later this month, based on new government guidelines.

However, the National Public Health Emergency Team is considering further restrictions in the capital to curb the spread of the virus.

The Licenced Vintners’ Association (LVA) says any extension of pub closures in Dublin will mean some owners will default on their mortgages.

LVA chief executive Donal O’Keeffe says his members need to open on the 21st of the month as planned.

It is clear to us they have an anti-pub agenda, they have worked to keep pubs closed since we closed voluntarily last March. We think the time to reopen has come.

He says these businesses have not made any contribution to the infection rate in the country and they are not “the source of the problem.”

“By the 21st of September we will have been closed for 189 days and it has had a ferocious impact on businesses.We simply cannot take another days closure beyond that,” he said.

He warned that pubs have mortgage payment breaks that expire at the end of September and if they cannot reopen, the government is essentially “pushing them into default.”

Tánaiste Leo Varadkar also recently suggested that pubs in Dublin could remain closed. Mr Varadkar said: “I think based on the numbers you’d be more confident about seeing the pubs in rural Ireland open on the 21st of September, rather than in Dublin.”

Yesterday, 107 out of 196 cases were recorded in Dublin, which continued the trend of rising cases in the capital. The 14-day incidence rate in Dublin is currently 67.8, and the rate at which the infection is spreading in Dublin is estimated to be about 1.4.