Did you hear the one about the Kerryman who picked his two hardest Mayo men? 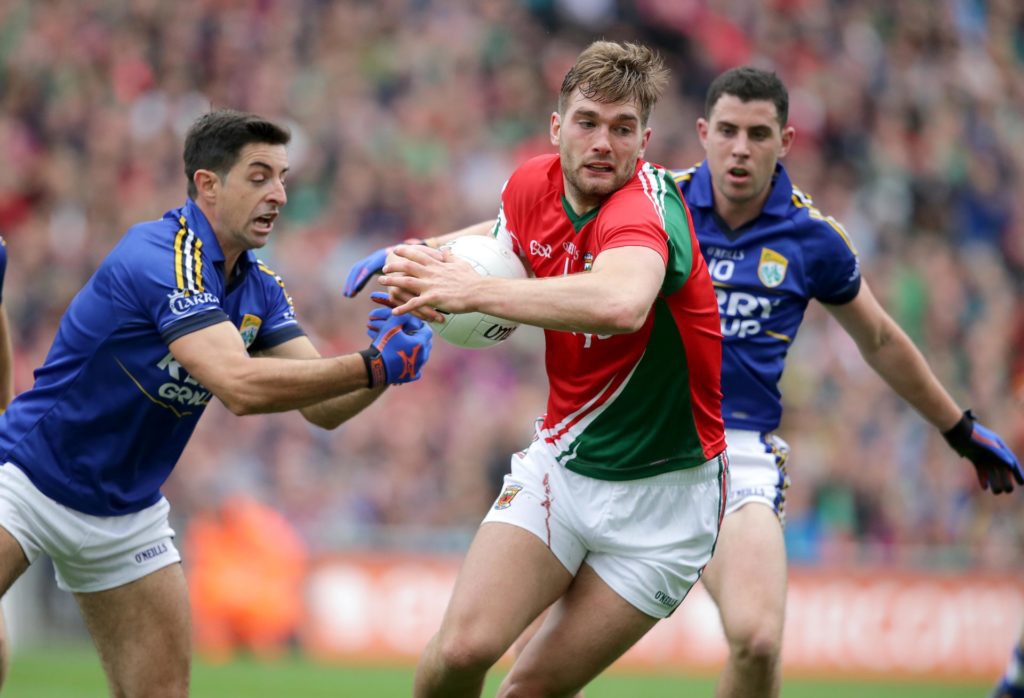 If you were raised on a diet of stories about Brian Mullins, Kieran Duff, Mick Lyons and their likes, and on what players those men used to like to eat for their breakfast, you might be interested to read about who makes the modern-day list of Gaelic football hardmen, at least in the eyes of one of the most successful players of the noughties.

Aidan O’Mahony won no fewer than five All-Ireland senior football championships during a career, including victories over Mayo in 2004 and 2006, picking up the Man of the Match award in the latter having marked Ciaran McDonald and scoring two points to boot.

And if any man should know a thing or two about hardmen it’s O’Mahony, who once played for more than 40-minutes with a broken leg in a Kerry club final and still managed to score two points.

Even now, aged 40, the former two-time All Star is captaining his native Rathmore.

O’Mahony was this week a guest of Newstalk Radio’s Off the Ball show and was asked to name his ‘hardest’ inter-county footballers of recent times. Two of them are from Mayo.

His former Kerry teammates David Moran and Tommy Walsh both made the cut, and he described the former AFL recruit Walsh as having “just frightening, unnatural strength.”

“You’d know when that guy goes training and he does his own work, that it’s 110 per cent, because you see it in games.” 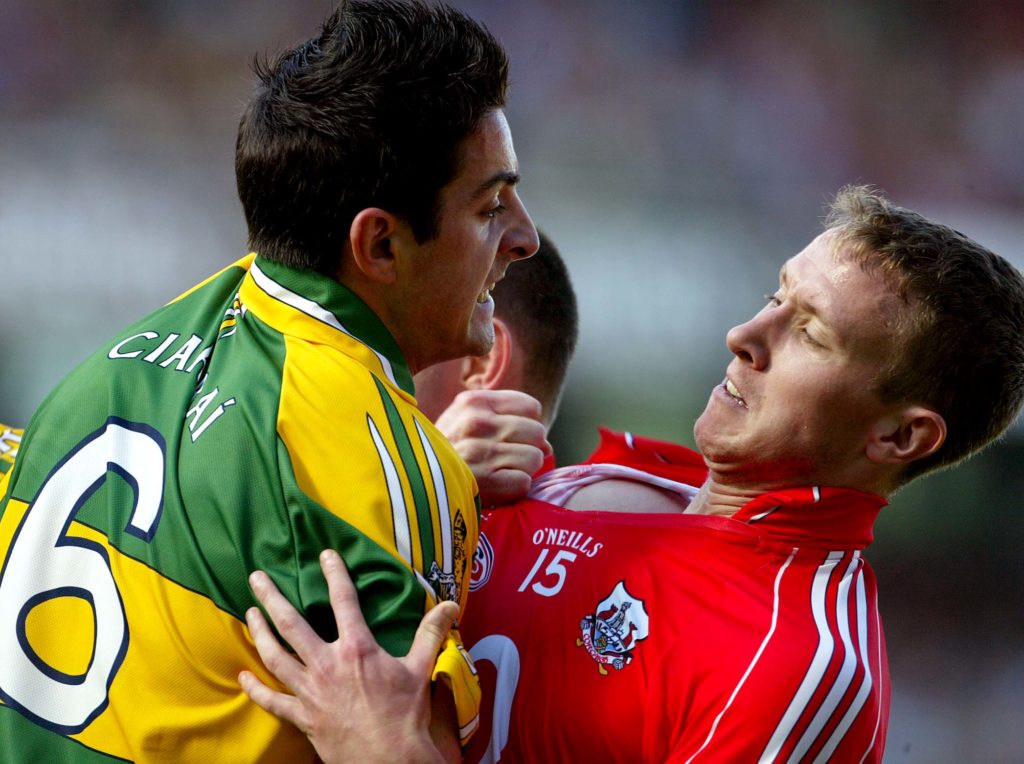 Cork’s John Hayes gets into a fight with Aidan O’Mahony back in the 2008 All-Ireland SFC semi-final. Picture: INPHO/Ryan Byrne

Aidan O’Mahony also selected two Dublin players, including Ballymun’s James McCarthy whose ‘on the edge’ style he is a big admirer of.

“He’s a beautiful footballer, a Rolls Royce of a footballer the way he runs. His cut and strength “has gone to a different level.”

O’Mahony also chose Con O’Callaghan who he said has lost nothing from his game since becoming visibly bigger due to his strength and conditioning regime.

“You need to bring something new to your game, and these fellas are every year. Con O’Callaghan probably realised the first year, ‘I’ve had a massive year here, but if I want to go to the next level and keep fellas behind me from catching up, I need to be on strength and conditioning.”

So then we get to Mayo and O’Mahony’s final two picks to his list of GAA hardmen – Aidan O’Shea and Andy Moran. Yes, Andy Moran.

One of the most revered Gaelic footballers of his generation, and certainly one of the greatest never to have won an All-Ireland SFC title, Moran is also the most capped Mayo footballer of all time. However, it’s unlikely that if asked to describe him in just one word, that even Andy Moran’s most ardent and loyal of supporters would have jumped to the hardman tag first. 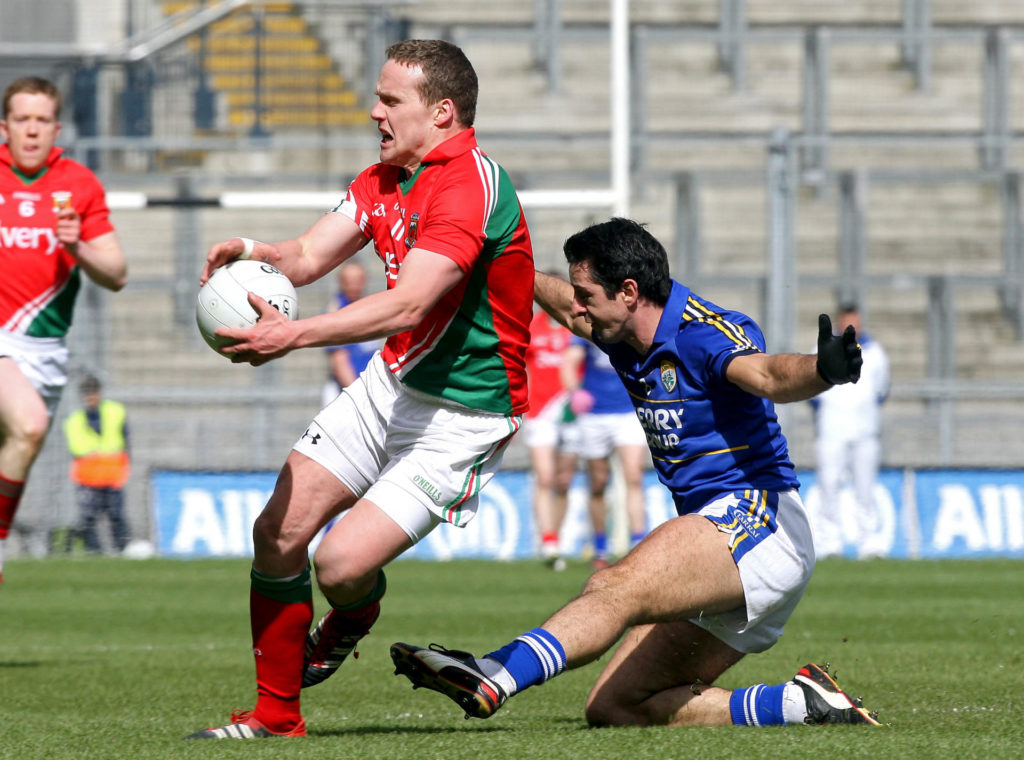 Aidan O’Mahony, however, believes that the longevity of Andy Moran’s career is proof he was one of the toughest in the business.

“You put that cuteness with that fitness side of it, and that’s the element that has brought him on.”

The ex Kerry footballer, who ranks open water sea-swimming and Olympic weight-lifting among his newest hobbies, was impressed with Moran’s televised display for Ballaghaderreen in the Mayo SFC recently, a game that also featured Aidan O’Shea who is busy preparing for a county final date with Breaffy.

“You’re talking about natural strength, and then when you put strength and conditioning on an athlete like that it just brings him to a different level,” he remarked.