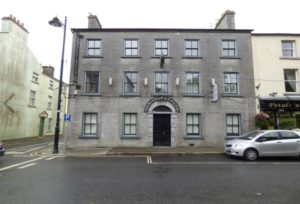 The Valkenburg, which is steeped in the history of the area, is located in the heart of the town at the junction of Main Street and Chapel Lane.

At an online auction, conducted by DNG Maxwell Heaslip and Leonard, based in Galway, bidding on the hotel, restaurant and nightclub building began at €250,000, which was the minimum bid. With two bidders hoping to acquire the property, which is being sold with a full seven-day licence, bids were being lodged for a half-hour before the gavel signalled the end of an era as a new owner was declared.

Speculation is rife in the town and surrounding areas as to who the new, online anonymous bidder is, which will surely become apparent over the coming days and weeks.

The building, which has six ensuite bedrooms, a bar and restaurant area as well as a substantial nightclub/function room, was initially built in 1858 by the Valkenburg family and was run from 1973 until last year by the Langan family.