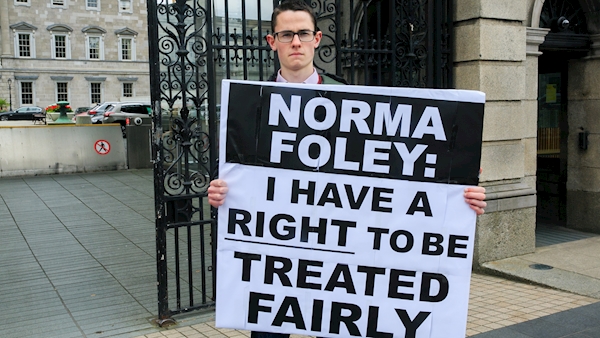 Elijah Burke from Castlebar outside Dáil Eireann where he had protested during the summer.

Arrangements have been put in place by the Minister for Education to allow a home-schooled Leaving Cert student from Mayo to get any calculated grades he is awarded at the same time as all other exam candidates.

Elijah Burke successfully challenged the Minister’s decision to exclude him from the calculated grades process and will receive any grades awarded to him by September 7th, when some 60,000 students will get their results.

The Minister had refused to give the teenager a calculated grade because he had been taught by his mother, Martina Burke, a qualified teacher.

Mr Justice Charles Meenan had directed the Minister to put steps in place to allow Elijah, and other home-schooled students excluded from the system because they had been home-schooled by a parent or close relative, be assessed for a calculated grade.

Earlier this week it emerged that while the Minister was putting steps in place to allow Elijah, from Castlebar, to be assessed for a calculated grade, there was no guarantee that he would receive results at the same time as other candidates.

Mr Justice Charles Meenan expressed his concerns over that lack of a guarantee, and the potential effect this might have on Elijah regarding first round offers of places in third-level education.

Brendan Hennessy Bl, for Elijah, on Friday told the High Court that significant progress had been made between the parties over how and when Elijah’s course work was to be assessed and graded.

Mr Hennessy, instructed by solicitor Eileen McCabe, said the student’s work would be assessed by independent teachers from the Mayo Education and Training Board. It would be assessed in the same manner by an independent teacher as an in-school student who had been educated by a parent or close relative. Any grades he receives in the nine Leaving Cert subjects he studied are to be awarded by September 7th, counsel said.

Mr Justice Meenan welcomed the arrangements put in place. He praised both sides for their efforts to deal with as complex a matter in a short space of time.

In a judgement earlier this month, Mr Justice Meenan held that a calculated grade system which excluded home-schooled students on the grounds that a teacher has a conflict of interest was “irrational, unreasonable and unlawful”.

He said a system had been put in place in schools to deal with scenarios where a Leaving Cert student has been taught by a parent or close relative.

The judge said that a non-conflicted or independent teacher or teachers ought to be involved in the place of Elijah’s mother in the system for the award of the estimated mark in each of his Leaving Certificate subjects.

He said the ruling applied to Elijah and some 10 other students in a similar situation.

Elijah, from Cloonsunna, Castlebar, hopes to study either biomedical sciences or history with music at NUI Galway. He is one of 10 siblings who have all been educated at home by their mother.

The Minister argued that it was not possible to give him a calculated grade for any of the nine subjects he has studied due to an absence of credible evidence from an appropriate source on which to base a grade.

This was because Mrs Burke was in a position of direct conflict of interest and that accepting estimated marks from a family member would undermine the integrity and credibility of the process. The State denied his rights were breached by a system it brought in due to the Covid-19 pandemic.