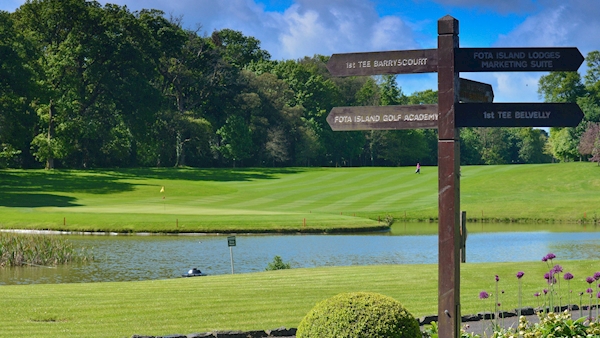 Patrons were stopped moving through the park as zookeepers chased the run away animal in golf carts.

However the bolting monkey ran through groups of visitors to get away.

In a statement from Fota Wildlife Park, they named the animal who escaped and also said the monkey was returned to its habitat:

“Today, Tuesday 11th August, one of our residents, a male Roloway monkey, Valentino, made a brief escape from his habitat here at Fota Wildlife Park.

“Valentino was continually under observation by the animal rangers and was quickly coaxed into a secure holding pen and returned safely to his island habitat. At no time was he in danger, or a threat to any visitors or members of the public.

“The Roloway species is extremely rare, even more so than any ape species. It is one of the most critically endangered primates in Africa.

“The Roloway is indigenous to sections of Ghana and the Ivory Coast and is an imposing-looking animal with a black coloured body and a chest and throat of white fur including a distinctive white goat-like beard and bright white fur on the brow-line.

“Fota Wildlife Park are constantly reviewing their animal welfare policies so that they can continue to improve our animals and visitors’ experiences and ensure that the animals who live here can continue to thrive.”

Teenage cyclist in critical condition after collision with car in Waterford