Excitement as 3,000-year-old discovery is made in Swinford

Archaeological excavations undertaken as part of the Cloongullaun Bridge Realignment Scheme on the N26 near Swinford have revealed the presence of interesting settlement remains which could be up to 3000 years old. 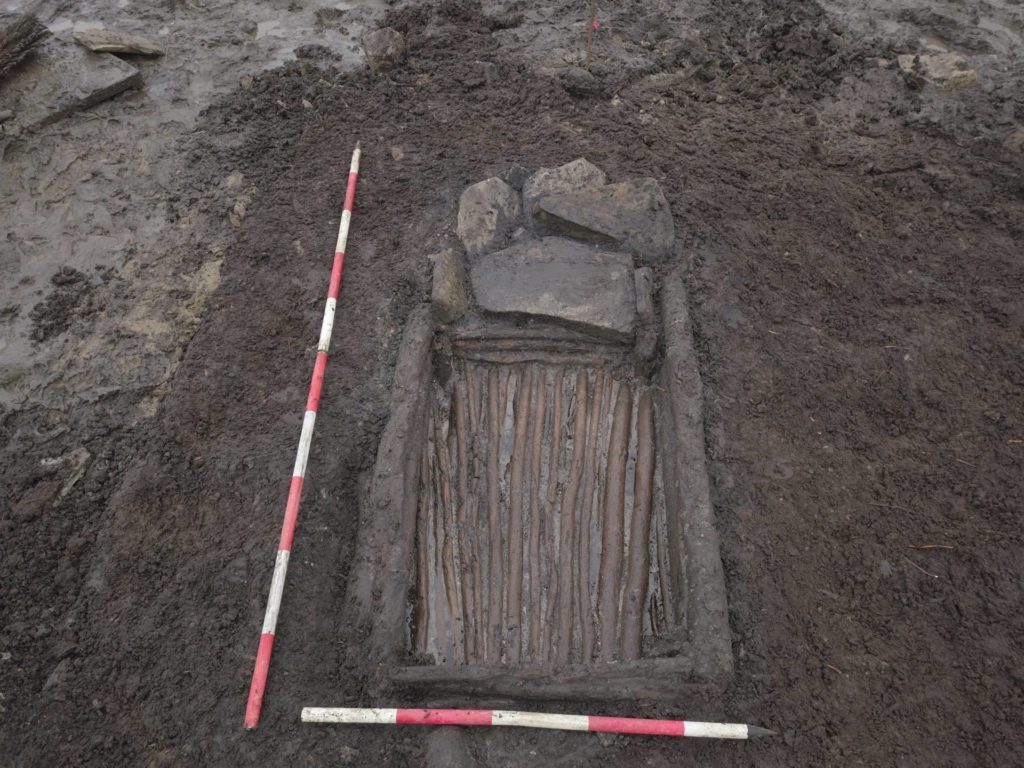 One of the troughs found on-site at Pullsharvoge during the course of the Cloongullaun road re-alignment works. The pit, which was likely used for heating water, is regarded as quite unique by virtue of how well-preserved its worked timbers are.

Post-excavation analysis is ongoing in relation to the site of what is commonly referred to as a fulacht fiadh which is unique by virtue if the finely preserved worked timber.

Also known as burned mounds, fulachtaí fiadh date back to the Bronze Age and are generally comprised of a mound charcoal enriched soil, featuring heat-shattered stone and a pit.

It was widely thought that these sites were used for cooking but more recent theories cite varied other possible functions or multi-use for purposes including bathing, sweathouses, beer brewing, butter production, leather working, dyeing and horn antler working.

Project archaeologist on the Cloongullaun works, Richard Gillespie, undertook the initial test trenching which identified the burned mound remains at Pullsharvoge in 2019.

The excavation works themselves were directed by Bruce Sutton of Rubicon Heritage Services and a team of four archaeologists and managed by Mayo Co Council’s National Roads Office and funded by Transport Infrastructure Ireland.

They found that the Pullsharvoge burned mound had been covered by peat build up over the years which had the effect of sealing its contents which include two wood-lined troughs featuring a total of 115 wood elements with 164 worked ends, together with a stone path.

There was evidence of wooden stakes on the eastern end of the first trough which may have acted a fence line, windbreak, drying rack or possibly a covering for the end of the trough.

The archaeologists believe the timber ends were shaped using a flat, metal axe.

A blog post about the excavation published on the Rubicon Heritage site notes that the presence of the linear pathway across the site is unusual in Ireland and may possibly have afforded access to the trough from a settlement that may have been located uphill from it.

The second smaller trough at Pullsharvoge had a stone platform at its eastern end which may have acted as a hearth from where charcoal and heated stones were pushed into the pit The blog post notes that determining the use for such sites – other than for the heating of water – is difficult due to the lack of definitive evidence and recovered finds.

Project archaeologist Richard Gillespie told the Western People that the site is particularly interesting because of its finely preserved worked timbers which are likely to be over 3000 years old:

“Some of the ancient wood is so well preserved that it looks as though it has been recently cut,” he remarked.

It is hoped that ongoing post-excavation analysis of the trough features including the worked wood together with environmental samples will facilitate a more defined interpretation of the Pullsharvoge site.