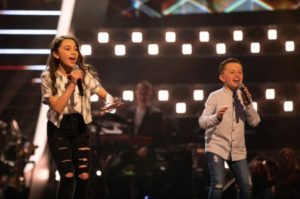 A Mayo mother watched on with pride as her son and daughter progressed to the next stages of the ITV show ‘The Voice Kids’ last weekend.

Nessa (14) and Cathal (12) Markham from Ballinagarry, Limerick are the children of Aoife and Shane Markham. Their mother Aoife is originally Aoife Grimes from Carrowkeel, Kilmaine Road, Ballinrobe, daughter of Agnes and the late Jimmy Grimes.

Aoife and her husband watched their children perform on stage and attended the show with Aoife’s younger sister, Niamh and her husband Michael Gallagher who live in England with their two daughters.

Speaking on the show, Aoife said she was ‘a nervous wreck’ as the duo took to the stage to perform their harmonised rendition of Mumford and Sons “I Will Wait For You.”

The proud mum then watched as the two performed in the final blind audition show for judges Danny Jones, Will.I.Am, Paloma Faith and Pixie Lott. At the closing stages of their fantastic performance, it was McFly star, Jones who turned his chair and the pair will now join his team for the next stage of the competition.

Speaking during the show, Jones said he himself used to sing with his sister and it was ‘meant to be’ that the Limerick duo joined his team.

The confident performance from the two showed they are no strangers to performing in front of large audiences having taken part in competitions such as Junior Eurovision and the Late Late Toy Show in the past.