Florida will forever be indebted to a proud son of Mayo 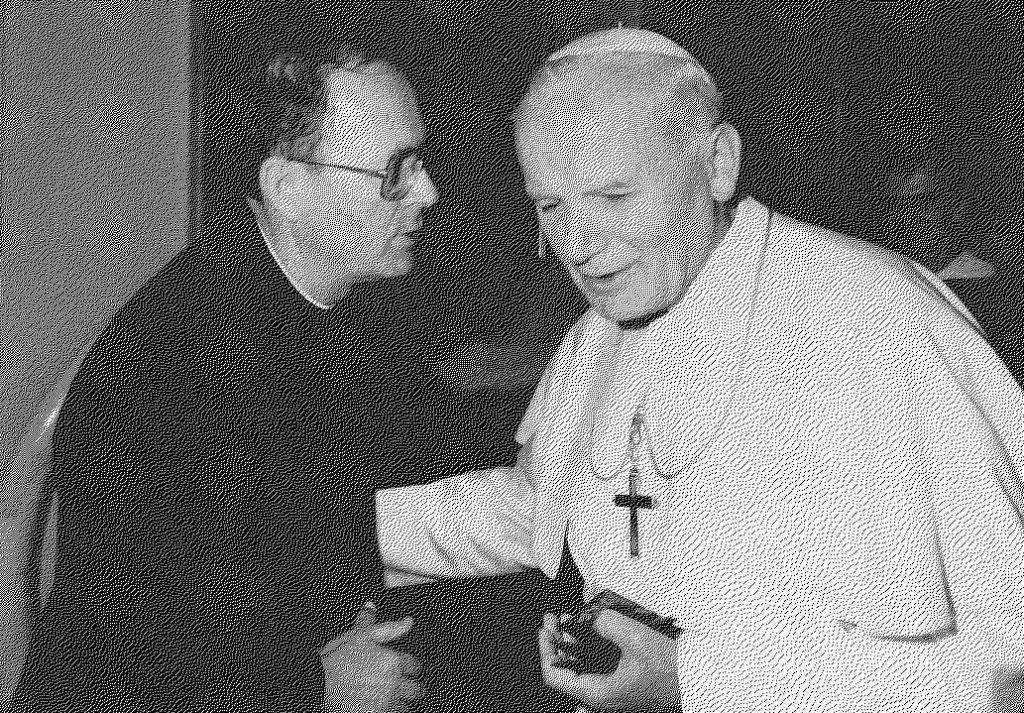 I have an abiding memory of Monsignor Fachtna Joseph Harte, who passed away recently, aged 90. It goes back to the early 1990s when a visit to Orlando took us to Sunday Mass in Our Lady Queen of the Universe Shrine.

Before Mass, Fr Harte (“Call me Joe,” he’d tell Americans who he knew found it difficult to pronounce ‘Fachtna’) emerged from the sacristy 10 minutes early to greet the congregation. Walking through the aisles he‘d call out “Anyone here from New York? Chicago? Boston?” Hands shot up. Pleasantries were exchanged. And then he called out “Ireland”? Several hands rose. And finally, with a big smile on his face, “Mayo”? We waved back at him. He knew of course that we were there. When Mass ended he would be found outside the main door, this time shaking hands and bantering with all and sundry.

When we returned to Florida in the autumn of 2000, the shrine was very much complete. And what a sight it presented, truly a work of great planning. Though there was accommodation for in excess of 2,000, the pilgrim was again made to feel truly at home by the Irish warmth of Monsignor Harte, a native of Moneen, Kincon, Ballina.

Our friendship had begun through the ups and downs of Mayo football. The man I got to know and admire gloried in the success of the county team. He lived for God and Mary and the Green and Red. He had experienced the wave of adulation sweeping the countryside when the county won its first senior All-Ireland in 1936. He was six then and Ireland was still agonising after the tragedy of our Civil War. On his way home from school — a school in which his father was not Master — he was called a ‘Blueshirt’ by roadside workers who knew that his Cork-born teacher-father, Timothy, was related to Michael Collins. Timothy had fought with the Old IRA in the War of Independence, and his brother had been brutalised by the Black and Tans, later dying from his injuries. Timothy was also on the Black and Tans’ radar and was advised by friends and the local priest to flee. 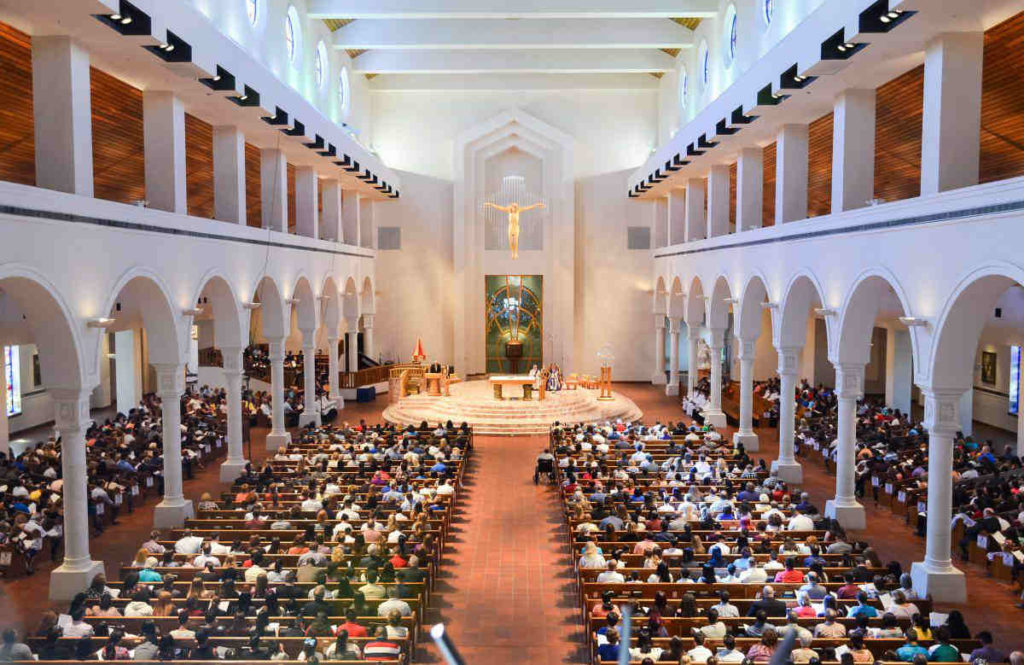 The magnificent interior of the Mary Queen of the Universe Basilica in Orlando, Florida.

He ended up in Westport to fill a teaching vacancy. To his great surprise, he was despatched to the Inishkea Islands, getting there by hackney car to Erris and a small boat across choppy seas to a two-teacher school. Sometime later a young woman, Elizabeth O’Neill, also came to teach on the island. It was love at first sight. They were married in Binghamstown Church. After the fishing disaster of 1927, the Inishkea Islands had been fully evacuated by 1934/35. By then Timothy Harte had taken up a teaching appointment near Killala. As Monsignor Harte recalled, ‘all hell broke loose’ because some felt the appointment should have gone to another candidate. The school was boycotted, but in time his father became recognised as a very fine teacher and an enterprising farmer; so well respected was he that the local church was packed for his funeral mass in 1956.

Fachtna always wanted to be a priest from the time he attended the first mass of his mother’s relation, Fr John O’Neill in Killala Church. When he was nine he attended Mass at Knock Shrine and prayed to be a priest. He received his secondary education at St Gerald’s Secondary School in Castlebar and St Mary’s Secondary School in Athlone. For a short time, he was a member of the teaching order of the Marist Brothers, having trained as a teacher at De La Salle College in Waterford City.

Throughout his school years — and after — he revelled in playing Gaelic football at a time when Brothers were not supposed to get physically involved. However, his Superior in Sligo looked the other way and Fachtna enjoyed county championship success with Craobh Rua, and town success with the ‘Lily Whites’. Around that period the Mayo senior team was winning back-to-back All-Irelands in 1950/51. That team, he recalled in his book, They Shall Bear You Up, represented “the style of Mayo football, a team apart”… possessing “power and a prideful commitment”.

He left the Marist Brothers in July 1955 and studied at Mount Melleray Seminary in Waterford and at All Hallows College in Dublin, where he was ordained to the priesthood for the Diocese of Yakima, Washington, in 1961. He taught in a high school there for nine years. In 1970 he moved to serve in the Diocese of Orlando where he taught at Bishop Moore Catholic High School. All the time he sought news from home on the Mayo team and devoured his weekly copy of the Western People.

In 1975 he became the founding pastor of Holy Family Parish. Orlando was then fast developing as a major tourist attraction. Realising the desire of Catholics to attend Sunday Mass, he and others established a ministry in four hotels and in Disney World, and every weekend he turned up, clutching a small suitcase containing all requirements for the celebration of mass. His support came from his band of “matchless volunteers”. In 1980 he was appointed Director of Ministry to Tourists and when his good friend Bishop Thomas Grady decided to build a church near Disney World, he chose Monsignor Harte to lead the project. He was to become Mayo’s Fr Horan across the Atlantic.

He raised money, bought a 17-acre site and set about building a magnificent shrine, the funds coming from enthusiastic benefactors who sponsored magnificent stained-glass windows, bronze doors, bells, Stations of the Cross, sculptures, etc. His church became the Shrine of Mary Queen of the Universe and was in 2009 proclaimed a Basilica by Pope Benedict XVI because of its ministry to an estimated half-million pilgrims, tourists, and the workers at Walt Disney World and Universal Orlando Resort. Today the shrine is one of the most visited Catholic sites in the United States, complete with a pioneering interactive museum and tranquil gardens.

Monsignor Harte’s parish and his diocese benefited greatly from his fundraising, and the fruits of his labour funded educational, social welfare, and other projects. When he retired he had discharged all debts on the basilica and the coffers of his diocese were many millions of dollars to the good. A down-to-earth, decent man with a great love for the Rosary, Our Lady, and great desire to serve, he shied away from churlish church politics, something that deeply disappointed and hurt him. He prayed for his detractors and never accepted personal praise for his role in the Shrine, saying that without Divine Providence and his great team of volunteers nothing could have been accomplished. 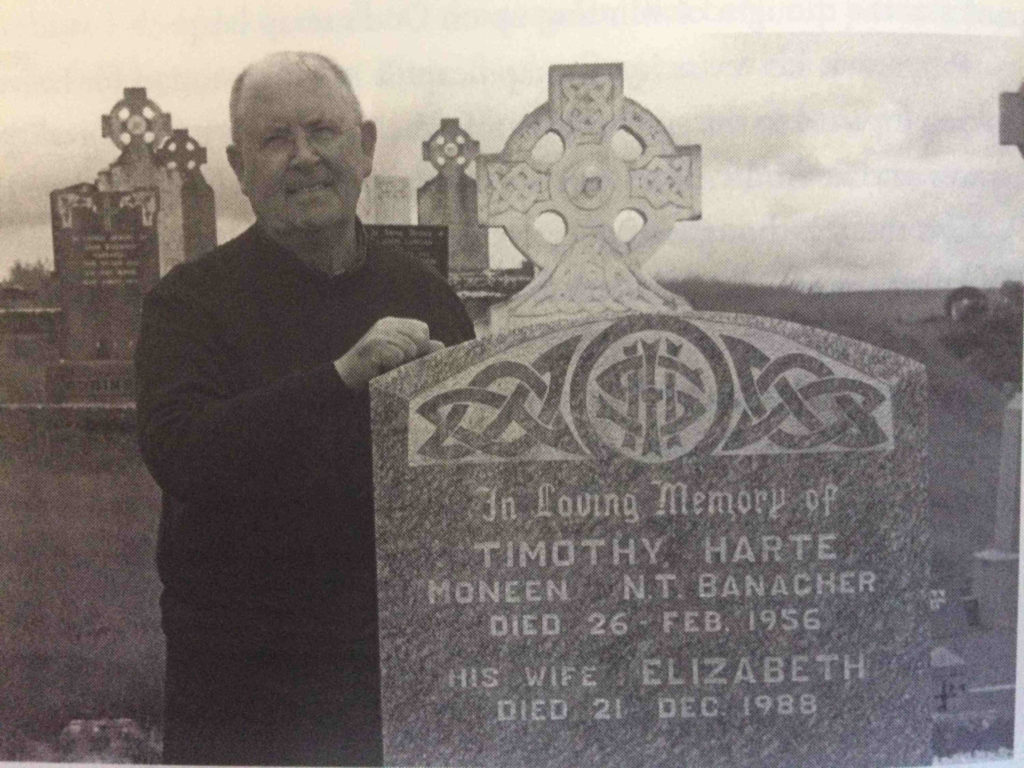 His great life-long friend Father John McMullan once asked him how he’d like to be remembered.

He said: “I love God. I love the Blessed Mother and I love all the people I have known. That’s ALL!,” he simply replied.

Monsignor Fachtna never stopped praying for the Mayo team, hoping every year that they would win the Sam Maguire Cup again. He engaged me in countless autopsies over the years, decrying our ‘softness’ and ‘hard-luck excuses’. Yet, he could be found back in Mayo every summer, full of hope and ready for the Connacht championship; and he’d fly home again for our All-Ireland semi and final games.

Deflated, he once reckoned that opposing teams had someone more fervent than him praying to God for a rub of the green. Now that he’s Up There, maybe, just maybe, the Good Man will be more inclined to listen to his ardent pleas!

As he was wont to say himself, “nothing is impossible with God”.

One of a family of eight, he is survived by his loving sisters Anne (Jackson), Cork and Monica (Fitzgerald), Dublin; his sister-in-law Mary, brothers-in-law Liam Holland and Jim Fitzgerald, his nieces and nephews, grand-nieces and grand-nephews, great-grandnieces and great-grandnephews, cousins, relatives, his large circle of friends, and his great friend Fr John McMullan, Orlando together with his entire Orlando “family” of friends.

Terry Reilly is the retired editor of the Western People and the author of several highly-acclaimed books.