An online petition to re-name the Salmon Weir Pedestrian Bridge in honour of the late Jack Charlton has attracted 250 signatures in just 12 hours. 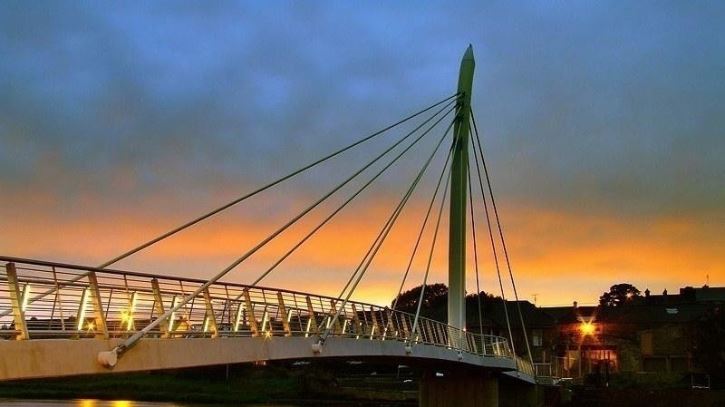 An image of the Salmon Weir Bridge featured on the Change.org petition to rename the structure after Jack Charlton.

On Wednesday, July 22 local Cllr Mark Duffy proposed that the public be consulted on an appropriate way to honour the late former Ireland soccer manager, Jack Charlton, who owned a holiday home in Ballina and frequently visited the north Mayo capital where he loved to fish on the River Moy.

Cllr Duffy told his fellow elected Ballina Municipal District Councillors that it had been suggested to him that the Salmon Weir pedestrian bridge over the Moy should be renamed as a tribute to Mr Charlton but there was a tepid response to this idea from the councillors.

Cllr Annie May Reape said it would be unfair to rename the pedestrian bridge which had been named following a substantial controversy and a plebiscite in 2010 while several other councillors suggested alternative gestures including a sculpture of Mr Charlton along the Moy or naming the town’s long-planned Salmon Life Centre in his honour.

A sector of the Ballina public has now begun to mobilise in support of the renaming of the Salmon Weir bridge after Mr Charlton with the launch of an online petition on the change.org online platform on Thursday evening.

Stating that Mr Charlton was a big part of the Ballina community and the country of Ireland, it says the renaming of the bridge in his honour would be a massive step forward for Ballina:

“This man has brought nothing but happiness and good times to our people, the fact that Jack picked OUR town, Ballina, County Mayo, Ireland as a place he called home and loved it here then I feel it’s only right we show him that love back and let’s make it his home! Who’s with me?” Mr Melia’s petition concludes.

A target of 500 people has been set for the petition and 250 have already supported it as of 10am this morning, Friday, July 24.