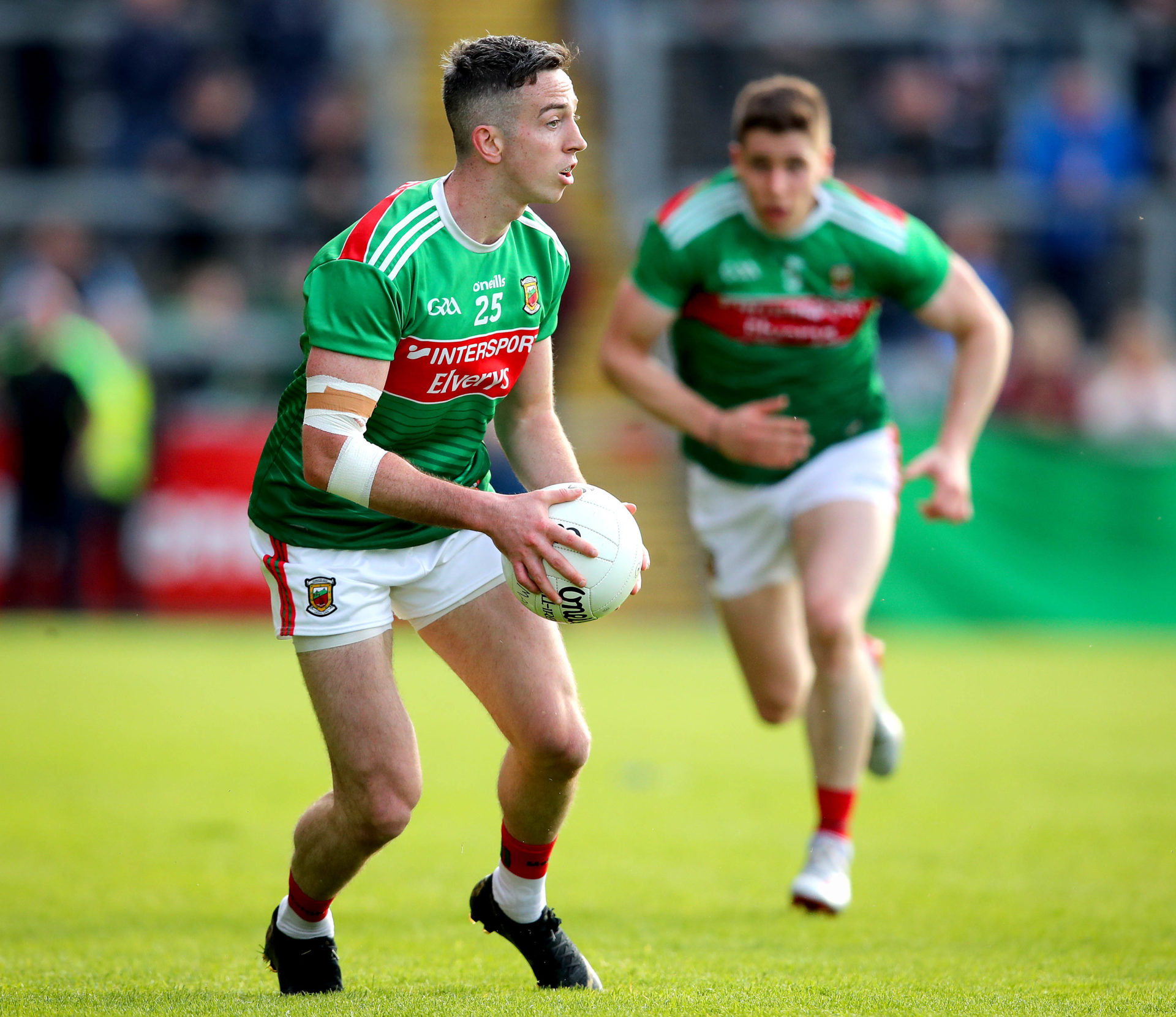 Foxford was baked in sunshine on Saturday evening as the footballers of Bohola Moy Davitts and Ballina Stephenites finally got their coronavirus-hit seasons up and running, by going head-to-head in Group 3 of the Michael Walsh Senior League.
It was the Stephenites whose season moved off to the perfect start, as a seven-point salvo from former Mayo forward Evan Regan proved the undoing of Moy Davitts on a final scoreline of 0-13 to 1-7.
Ballina asserted their dominance early in the contest, as Jack Irwin claimed possession from the throw-in before feeding Kevin Newell to fire over. Sean Regan then picked out Evan Regan who kicked instinctively over his shoulder to double his side’s advantage.
It was Anthony Jordan who eventually opened the host’s account from a free, but that was soon cancelled out as Keith Tighe helped himself to a score. Adam McAndrew then further increased the Ballina lead, as he seized on a loose ball before splitting the posts. This was quickly followed by a brace from Evan Regan, the first a free from the right sideline, the second a peach from distance, to put the Stephenites 0-6 to 0-1 in front.
But Moy Davitts eventually sprung into life and Brian Heneghan sent over a point from well out the field, before Jordan added a pair of frees in quick succession.
Suddenly Ballina’s lead was back to two but some good work from Tighe saw him engineer the room to cut inside and add his second score of the half. There was still time for a response from the East Mayo men however, as Padraig Ruane launched over a monster score on the stroke of half-time.

The Stephenites were again quickly out of the blocks in the second half as an early score from Newell was followed by a peach from Regan, who stroked over with the outside of the left from close to the left touchline. Some quick thinking from Oisin McHugh saw him play in Brian Reape to register Moy Davitt’s opening score of the half in response. But again it was soon cancelled out as Padraig O’Hora got forward to split the posts.
Reape then spurned an excellent opportunity to cut the gap to the minimum when some clever build-up play saw him race through on goal but he arrowed his shot narrowly wide of the left hand upright. He would redeem himself moments later however, as Eamon Regan intercepted a loose pass before finding Reape, who made no mistake to find the back of the at the second time of asking.
Reape’s major had it back to a one-point game but Ballina found scores at just the right times to halt Moy Davitts’ momentum, as first Regan converted another free before then calling a mark and splitting the posts from the resultant placed ball. A plethora of second-half substitutions did interrupt the flow of the game as both teams looked to get minutes into legs. The final scores of the contest came late on as Reape and Regan traded frees, as the Stephenites held on to claim the points and the Moyside bragging rights.
Scorers – Moy Davitts: Brian Reape 1-2 (0-1f), Anthony Jordan 0-3f, Brian Heneghan and Padraig Ruane 0-1 each.
Ballina Stephenites: Evan Regan 0-7 (3f, 1m) Kevin Newell and Keith Tighe 0-2 each, Adam McAndrew and Padraig O’Hora 0-1 each.
Bohola Moy Davitts: Christopher McGlynn; Sean Mulroy, Darragh Ruane, Mark Regan; Oisin McHugh, Neil Murphy, Noel Regan; Padraig Ruane, Eamon Regan; Alan Burke, Brian Reape, Ryan Binley; Brian Heneghan, Anthony Jordan, Ryan Kenny. Subs: Cormac Healy (for Reape 10-12, blood), Conor Reid and Conal Quinn (for E Regan and M Regan 35), Sean Kelly (for Burke 37), Healy (for Jordan 43), Cormac Mulderrig (for Mulroy 45).
Ballina Stephenites: David Clarke; Adam McAndrew, Christopher Hunt, Liam McGarry; Padraig O’Hora, David O’Mahoney, Thomas Doherty; Ciaran Sweeney, Jack Irwin; David Tighe, Sean Regan, Luke Doherty; Keith Tighe, Evan Regan, Kevin Newell. Subs: Simon Leonard and Ger Cafferkey (for O’Mahoney and Regan 35,) Stephen Mullins (for McAndrew 38), Conor McStay (for Sweeney 43).