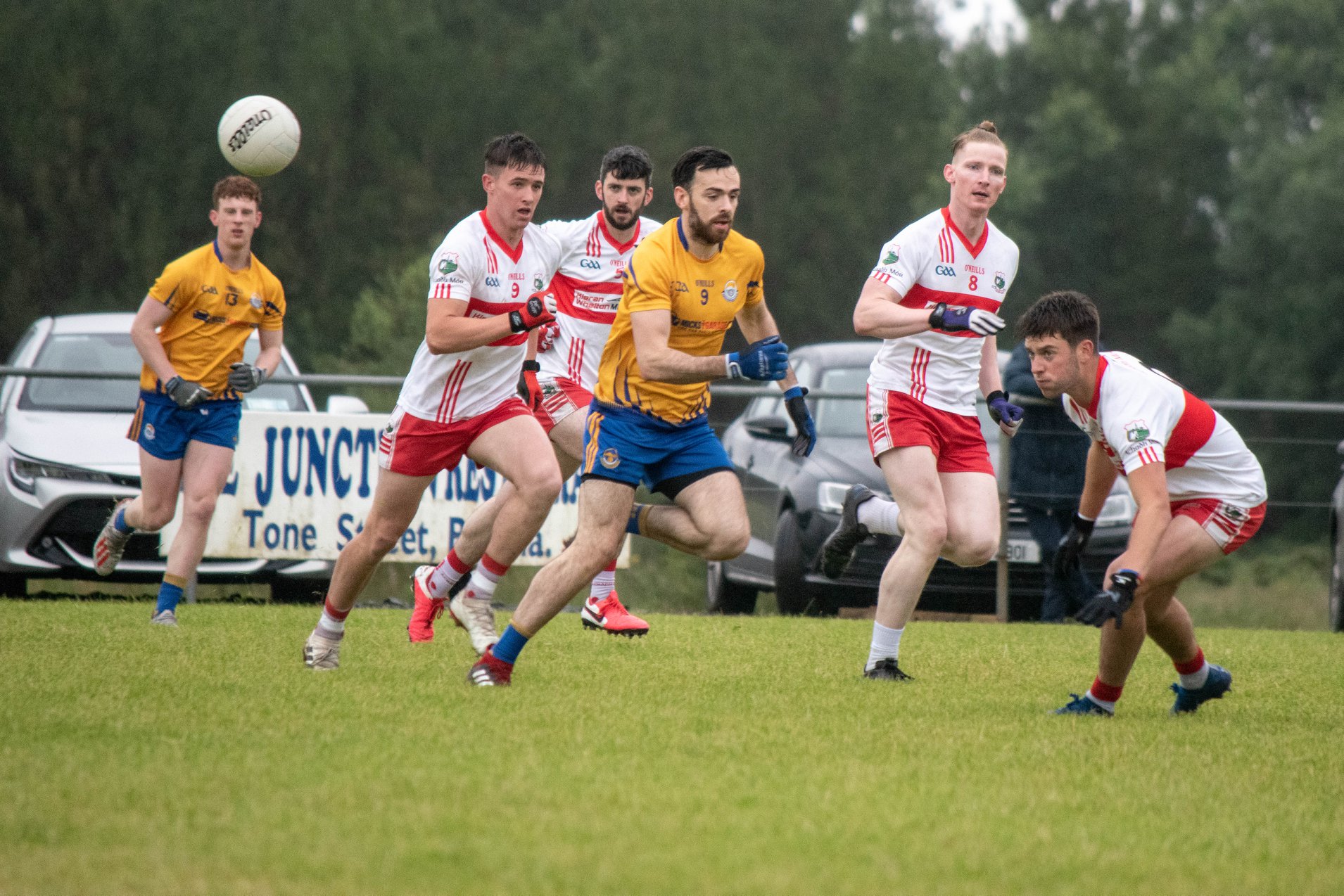 So it was, all of 128 days after lockdown measures were imposed on the country and the GAA season was frozen in place, club football resumed in Mayo on a drizzly Friday night in Knockmore. The dour weather was probably apt, a reminder that for all the changes foisted upon us by Covid-19, July in the west of Ireland is still dependably
undependable.
The home club were playing Aghamore in the opening round of the Michael Walsh league, traditionally a largely unloved and unminded competition that has seen its stock skyrocket this year as the gateway drug back into competitive football and the only tune-up clubs will have before the start of the club championships on the August Bank Holiday weekend.
With that in mind, both sides sent their best and brightest into the fray, Brendan Harrison and Fergal Boland both starting for Aghamore and Kevin McLoughlin for Knockmore, all under the keen eye of Mayo manager James Horan, himself already deep in preparations for the planned return of the inter-county game in October.  Club football, it seems, has been quick to step back into its own little rhythms and rituals.

While around it the world is in flux, there was a definite sense not just of relief, but of comfort amongst the patrons at St Joseph’s Park on Friday night. To be able to go and watch a club game of a summer’s night was a pleasure that most supporters never thought much about before it was denied them, and to have it back after more than four
months of turmoil was clearly a very welcome step back towards normality.
That’s not to say things are just as they were before. The paraphernalia of the pandemic was deliberately prominent. Hand sanitizers stationed around the pitch, lines of paint along the boundaries marking out two-metre distancing, the man on the PA gently but persistently reminding people of their responsibilities toward one another. These are the consequences of the pandemic, but a small and easily-paid price for a controlled return to football. 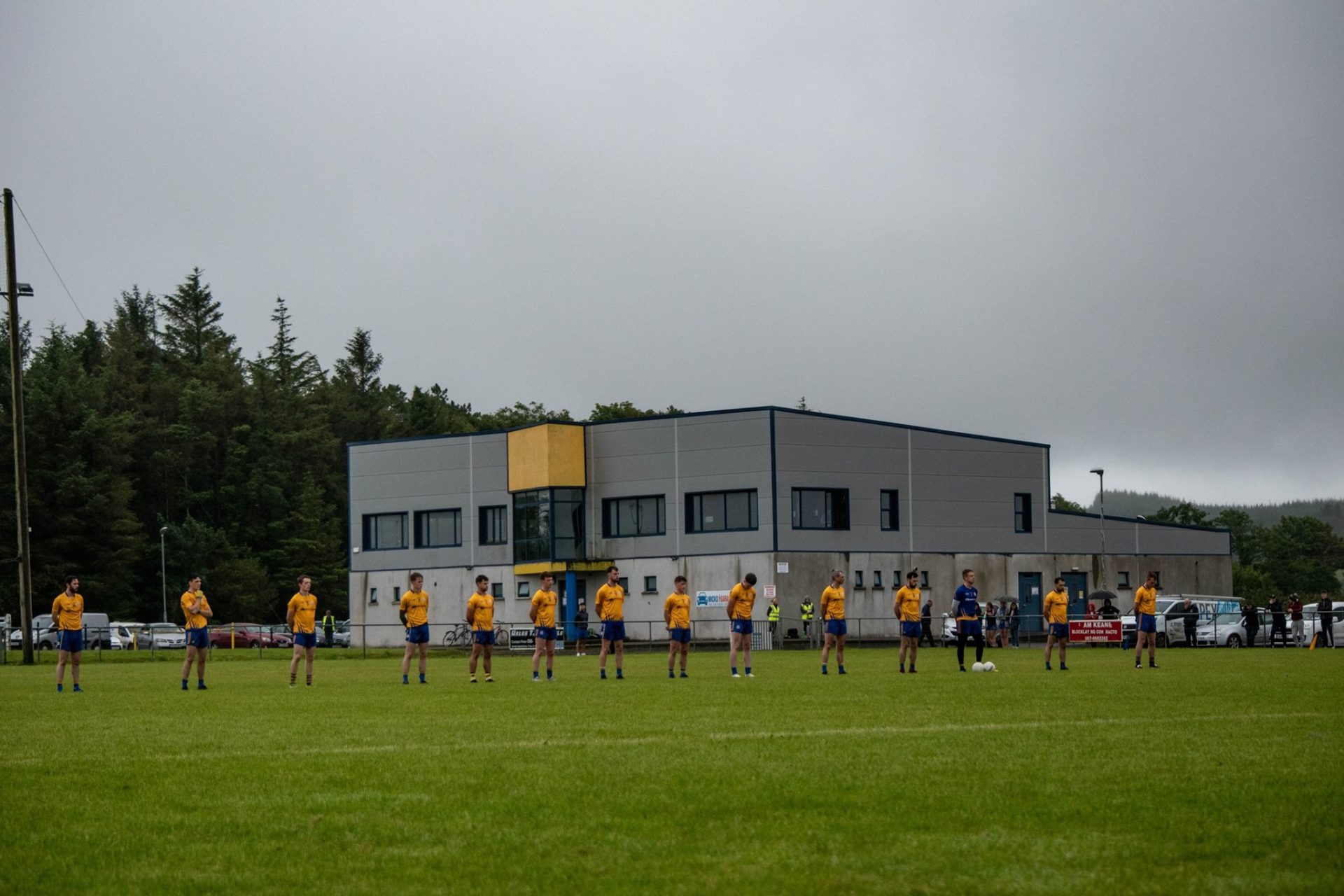 Knockmore players stand for a minute’s silence in memory of the victims of Covid-19 before throw-in in their Michael Walsh senior league clash with Aghamore in St Joseph’s Park on Friday night. Picture: Ciara Buckley

There were changes too on the field itself; before throw-in at every club game in the county this weekend, a minute’s silence is being observed in memory of those who have lost their lives to Covid-19. Water-breaks are a new introduction, a 60-second break in play to be called by the referee between the 15th and 20th minutes of the two halves to allow players to take a drink from their own designated water bottles in lieu of the banished and much-lamented maor uisce.
But the game is still the game, pandemic or no pandemic. Friday night’s was a decent one, considering it was the first competitive outing for both clubs since last autumn. Aghamore dominated the first half as Knockmore struggled to come to terms with Boland’s dizzying movement and should probably have led at the break, but Knockmore looked much the stronger team in the final 20-odd minutes and ran out deserving three-point winners, their young attacking axis of Peter Naughton and Aidan Orme both impressing.
The result was by-the-by to a certain degree though; its enhanced significance notwithstanding, the Michael Walsh is still basically being used as a primer for the championship and the respective managers, Ray Dempsey and Adrian Donoghue, would have seen plenty to be encouraged by and plenty more to work on. Of more importance was the symbolic act of simply getting back out on the field. We are still in a time of deep uncertainty and the GAA is no exception, with Covid outbreaks in clubs around the country in the last weeks a reminder that no plans for the remainder of the year are set in stone.
But on a wet night on the edge of Lough Conn, another small but significant step was taken away from the nightmare of Covid-19 and back towards something approaching normality, and that in itself deserves to be celebrated.