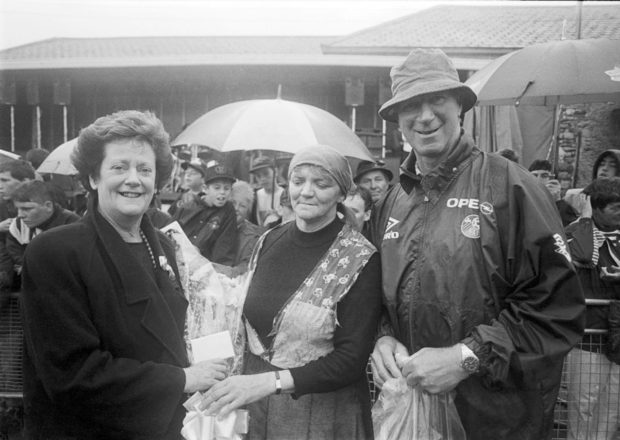 Jack Charlton hard at work at 1995 Ballina Festival Potato Picking Race. He is pictured alongside Betty Sweeney and Mary O’Rourke

Former Mayo and Ballina Stephenites footballer Liam McHale has shared some of the fondest memories he had with Jack Charlton. Big Jack was a regular visitor to Ballina and in particular enjoyed fishing at the Ridge Pool on the River Moy.

Liam McHale, speaking to the Irish Mirror, recalled that him and Jack would “often sit down for a pint in VJ Doherty’s” during the summers, which would culminate in the staging of the Ballina Salmon Festival, where the pair once became fierce competitors in a celebrity pig race.

“For the festival one years they had a celebrity pig race and myself and Joe Corcoran and Jack. You had a bin-liner with two sticks on either end and we were racing these pigs down the middle of the town. I’d say there was about 5,000 or 10,000 people watching it. Obviously there was great football memories, but once he started coming to Ballina for most of the summer, you get to know him.”

“He was just a guy that loved the craic and loved a few pints of Guinness and mixed very, very well. I never found him to be thick or anything like that. He always seemed to be in good form. For a fella that won a World Cup medal and managed Ireland, to be stuck in the middle of the town at festival time in front of 10,000 people and racing a pig up the street and laughing his arse off, it was hilarious.”

“We would have very fond memories of him around Ballina, he loved the Moy. He loved the town. Every summer you’d bump into him.”

“These things aren’t allowed to be done anymore because of animal rights but there was people gambling on who was going to win the race and there were six of us. We had six pigs, the build-up was massive, PA system and the whole lot. When I was told that Jack Charlton was in the race I said, ‘He’s not going to do this, is he?”

“But sure enough he was the first fella up there with a pint of Guinness in his hand in a plastic container, finished his pint and away he went.

“He really, really was a normal human being here. He loved the fishing, obviously the Moy was the big attraction. For 15/20 years he was there regularly.

One thing that struck McHale, who was also a star basketball player, was that Jack was one of the few around Ballina that he himself didn’t tower over.

“When you meet a lot of soccer players and you hear about these guys, these big central defenders, they’re not normally that big but he was 6’5”, 6’6” so that was the big thing but then straight away you realise he’s a gentleman with that lovely Geordie accent and all he wanted to do was have a bit of fun and relax.” 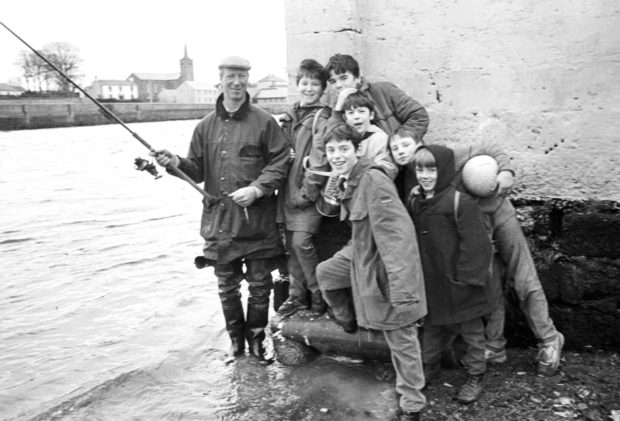 As well as that, Jack himself was a great tourist attraction with people coming from miles around to see the Irish soccer legend according to Liam.

“You put up on Mid-West Radio and on the Western People that Jack Charlton was going to be in the pig race at 8.30 on Tuesday night at the festival, definitely people would have come in that night to see Jack. He’d be surrounded with people. He definitely would have been a massive pull to the area.”

Famously, within 48 hours of Ireland’s defeat to hosts Italy at the quarter-final stage of Italia ’90, Jack was back at the Ridge Pool with his fishing rod in hand.

“That’s where he wanted to go, you see. I’d say the crowd and that kind of stuff would have got to him. I remember him saying, ‘What would it be like if we won?’ He did what he had to do. We were surprised at that stage that he went fishing but after a hard month or month and a half of being in a bubble…”

“He had bought the house so he had a base here. It was very easy for him to go from Dublin to Ballina, he’d be in Ballina in three hours in those days. People were very fond of him here, he was just a gentleman. A lot of people are saddened.”

The all important question still remained, who won the pig race?

“The pig turned on me twice. It’s a good job the animal rights people weren’t there, I’ll put it to you that way!”

30 years on, the Maughan magic endures