The darkest day: a decade on from Longford, 2010 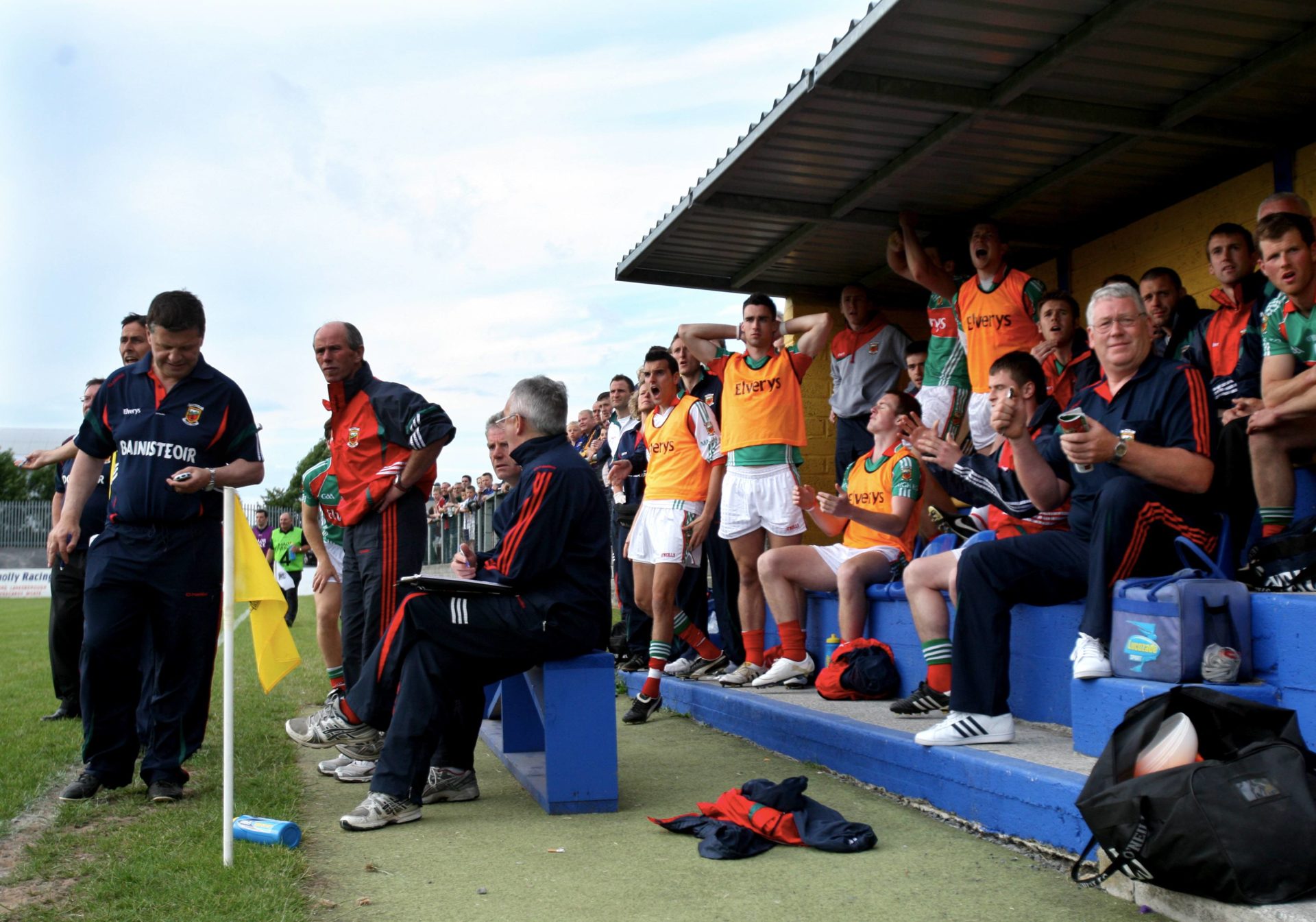 The Mayo bench watch on during the agonising closing moments of Mayo’s one-point defeat to Longford in a Round 1 qualifier in 2010. Picture: INPHO/James Crombie

It sits at or very close to the bottom of the pile when it comes to Mayo defeats, at least in the modern era. In terms of sheer ignominy, there’s little to rival it. Kildare in 2018 were a team possessed. Fermanagh in 2003 and Westmeath in 2001 were both coming sides. You probably have to go back to Leitrim in ‘94 to find a suitable comparative, and even that doesn’t sit quite right.

“Mayo hit rock bottom” ran the admirably succinct headline in the Western People on Tuesday, June 29, three days after the 1-12 to 0-14 defeat to Longford in Pearse Park that ended John O’Mahony’s second stint in charge of the county on the lowest of notes.

“Mayo football is at its lowest ebb in a generation,” wrote Anthony Hennigan in these pages, “O’Mahony presiding as the senior team slid from Croke Park contenders to Pearse Park pretenders.”

The scale of the catastrophe hasn’t receded much ten years on. It was undoubtedly the shock of the summer, and that in a year in which Cork and Down contested the All-Ireland final, Kerry and Tyrone went out in the last eight and Meath stuck five goals past Dublin (and threw one past Louth) on their way to lifting the Leinster title.

Longford came into the game with only two wins under their belt in 2010, and those against the twin powerhouses of London and Kilkenny, the Cats making a short-lived go of things with the big ball in Division 4 of the league. Longford had duly finished third-from-bottom of that division, 31st out of 33 teams in the overall league pyramid. 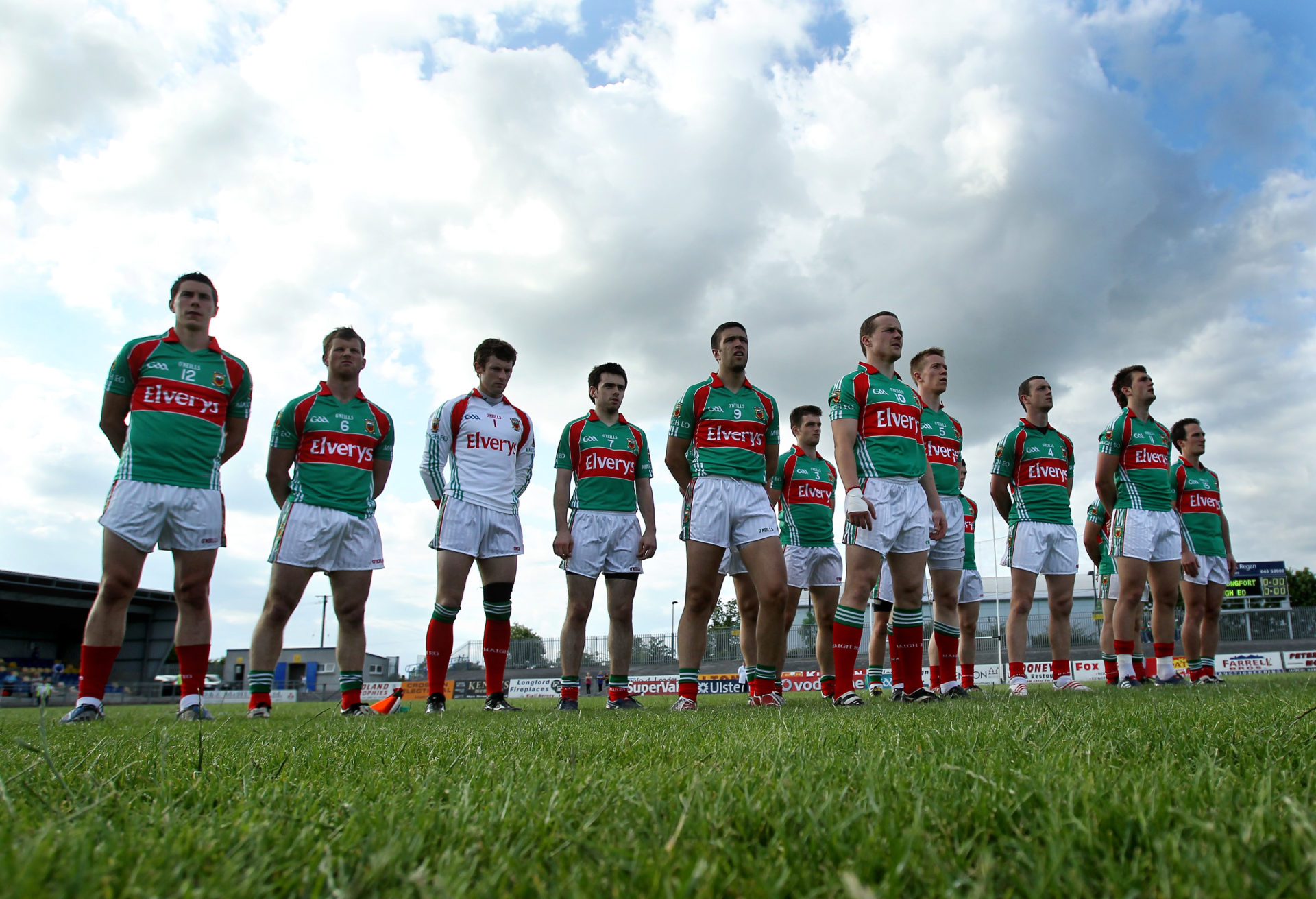 The Mayo team stand for the national anthem in Pearse Park.

Mayo, in contrast, had finished first from 33, top of the Division 1 table with six wins from seven games. They had subsequently been beaten by Cork in the league final at Croke Park, but heading into the championship campaign they looked in decent order to defend the Nestor Cup title they had won in dramatic circumstances the previous summer, when Peader Gardiner broke Galway hearts in Salthill.

But things took a turn for the disastrous as early as the first round of the Connacht championship when Mayo went to Markievicz Park to take on Sligo. The Yeatsmen were moving well under Kevin Walsh and had lifted the Division 3 league title with victory over Antrim a month earlier, but Mayo were still expected to make light work of the encounter on their way to a semi-final showdown with Galway.

But Sligo hadn’t received that version of the script. They dominated Mayo from pillar to post and probably should have won by more than their four points. An Alan Freeman penalty had given Mayo the lead early on but the home side, with Eamon O’Hara outstanding at midfield and Mayo native Alan Costello pulling the strings on the ‘40, proved far too strong for a Mayo team that simply wasn’t at the races. James Horan, writing in the Western at the time, described the display as “as inept a performance as Mayo have given in the championship in recent years.”

The draw for Round 1 of the qualifiers, set for the weekend of June 26-27, saw Mayo avoid the likes of Armagh and Donegal and instead pick up what looked a plum pairing with Longford, who had exited the Leinster championship in the first round after defeat to Louth in Portlaoise (Louth would go on to reach the provincial final, where they were beaten by Joe Sheridan’s contentious late goal).

But the Leinstermen were a tricky proposition in the qualifiers, particularly at home, as Kerry had found out the previous summer. After losing to Cork in Munster, Jack O’Connor’s side staggered their way to an unconvincing four-point win in Pearse Park, scoring just two points in total in the second half. They would still go on to win the All-Ireland. 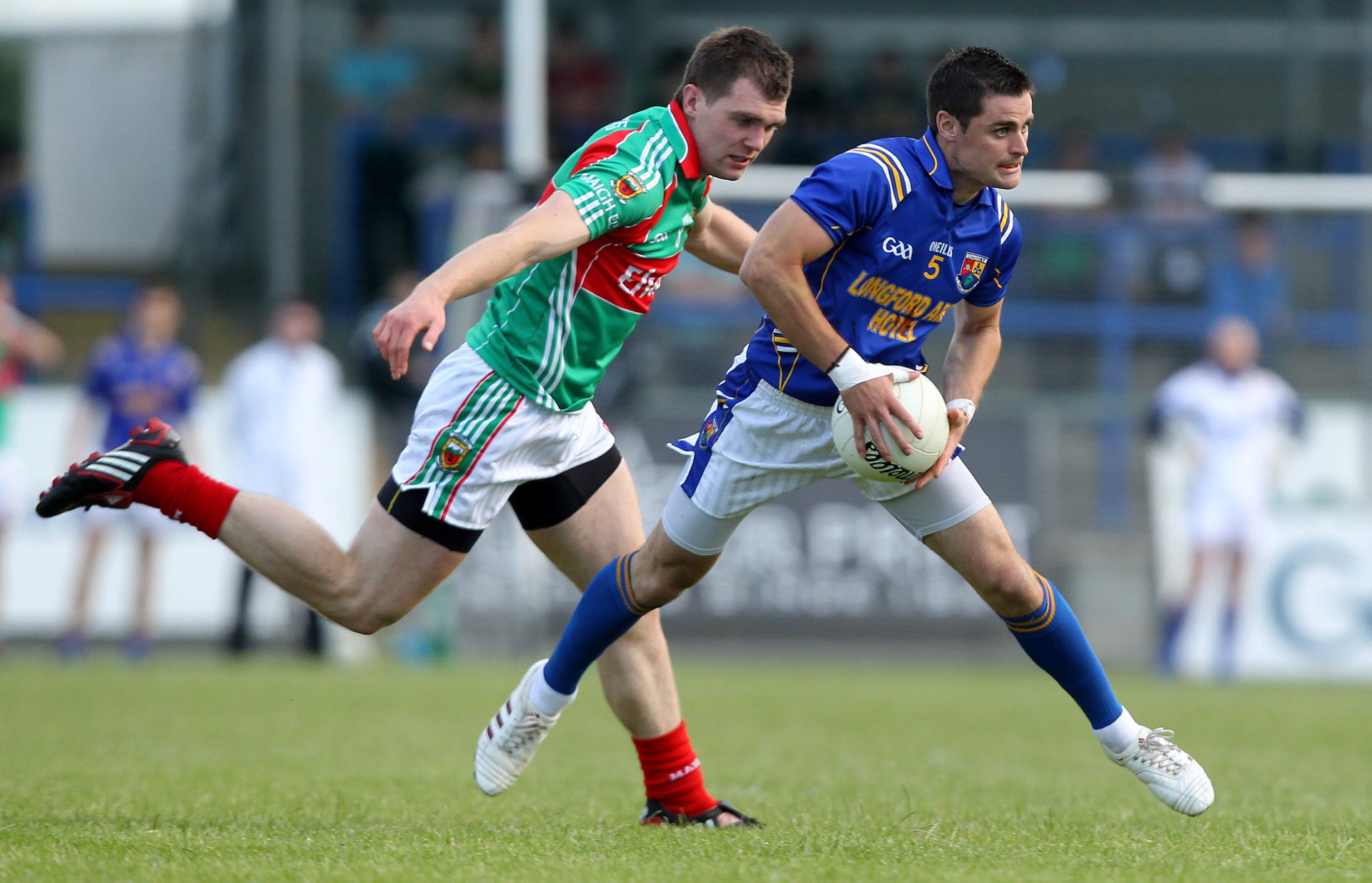 Mayo’s Seamus O’Shea and Shane Mulligan of Longford are choreographed in midfield.

Longford were managed at the time by Glenn Ryan, the Kildare legend and two-time All-Star who captained the Lilywhites when they reached the All-Ireland final in 1998 under Mick O’Dwyer. Included in his management team was one Graham Geraghty, the former Meath star who knew all about breaking Mayo hearts.

O’Mahoney made as many as six personnel changes to the team that had started against Sligo and another raft of positional switches. Only two of the six defenders started in the same positions in both games. Chris Barrett was handed his championship debut for the Longford match. A 20-year-old Aidan O’Shea played at centre-forward for the first time at senior level. The same went for Keith Higgins at centre-back. Pat Harte and Seamie O’Shea partnered at midfield for the first and last time.

There were other positional choices that seem strange in hindsight too, like the deployment of Kevin McLoughlin at wing-back, the same role designated to Tom Parsons when he came off the bench. Barry Moran started at full-forward, drifted out to centre-forward and ended the game playing somewhere around midfield.

An unsettled team produced an unsettled performance. Mayo began brightly as Alan Freeman, whose emergence in the full-forward line was just about the only silver lining on a very cloudy summer, helped the away side into an early three-point lead. Conor Mortimer, Alan Dillon and Barry Moran also landed points but Longford began to grow into the game as the half developed and were within a single point after half an hour (0-5 to 0-4) after veteran forward Paul Barden popped his side’s first point from play.

Mayo pulled away before half-time with an Andy Moran brace while Longford were hampered by Barden going off injured, but already the Mayo sideline had spotted signs of the trouble coming down the tracks. Liam O’Malley came off the bench late in the first half in place of McLoughlin to get a handle on Longford’s Paddy Dowd, while Mark Ronaldson was also introduced in place of Aidan O’Shea seven minutes after the restart, despite the young Breaffy star having done well in his new centre-forward role (albeit also picking up a booking). 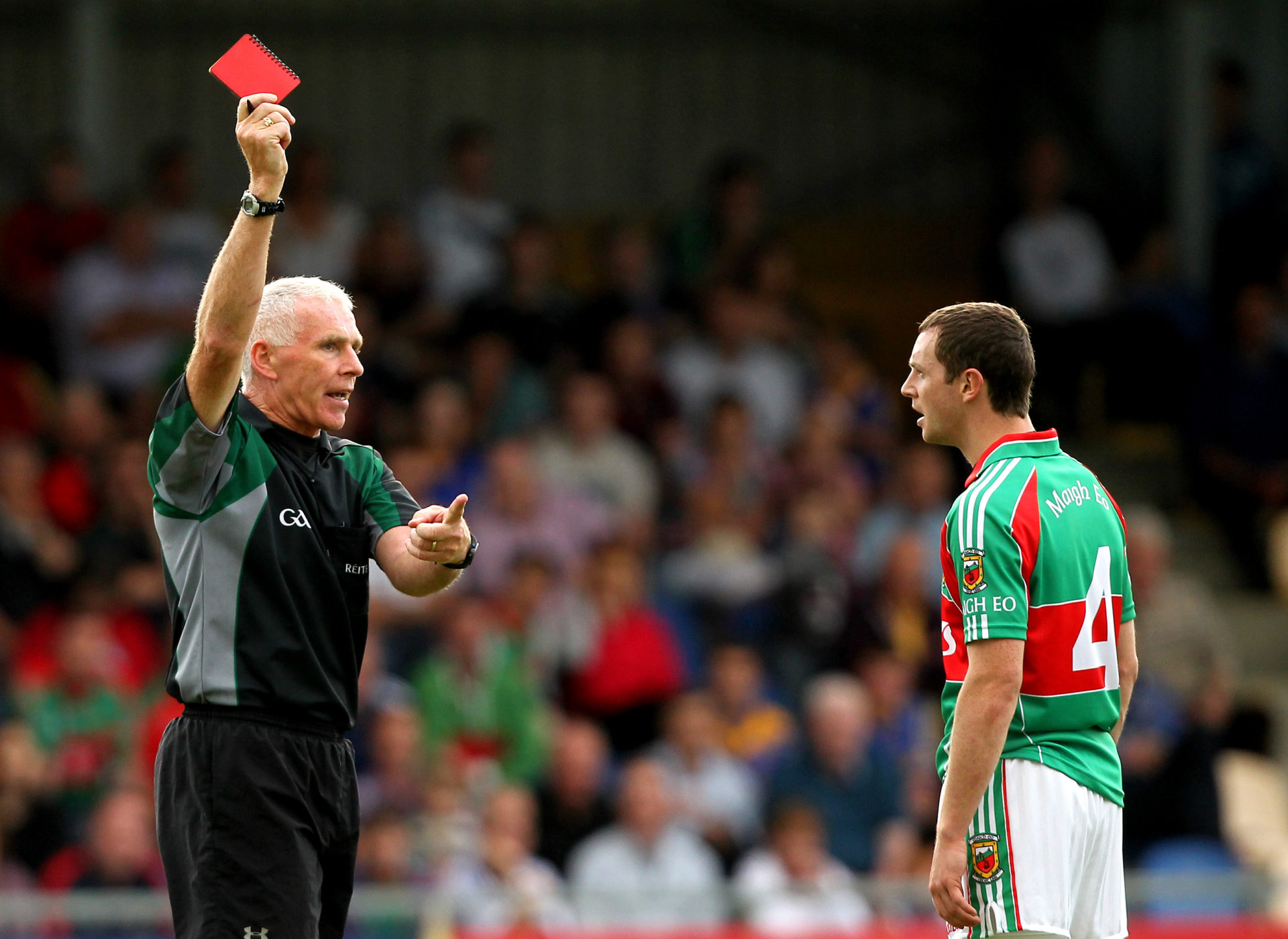 Mayo’s Keith Higgins is sent off by referee Gearóid Ó Conámha from Galway.

Mayo had led by three at the interval and by four as late as the 44th minute after a brace of Dillon points. But Longford would hit a purple patch thereafter, racking up an uninterrupted 1-4 in the space of seven minutes to change the complexion of the game. Kevin Mulligan, Francis McGee and Dowd all landed points before Mulligan, Dowd, Sean McCormack and Brian Kavanagh combined brilliantly to tee up substitute Paul Kelly, who drilled the game’s only goal to the corner of David Clarke’s goal.

Another Kavanagh point soon after meant the home side were suddenly in possession of a three-point cushion, 1-9 to 0-9, but Mayo were able to battle back. Freeman kicked two more points, and despite Kavanagh escaping Ger Cafferkey to restore the two-point gap, scores from Freeman and Mortimer had them all square by the 66th minute.

But for every chance Mayo were converting, they were leaving another two behind them; Ronaldson and Barry Moran could both have had goals, while one of Freeman’s points should really have been three. Mayo were also reduced to 14 men when Higgins was red-carded for allegedly using abusive language to Galway referee Gearóid Ó Conámha with five minutes of the 70 to go.

Longford wing-back Shane Mulligan fisted the home side back in front but Freeman replied with his fifth of the day. Mayo then had a chance to go back in front in the dying minutes as Donal Vaughan broke forward, but his shot skewed wide. It allowed Longford one last chance to go and win the game, and they took it: Sean McCormick skipped inside O’Malley to fire over the winner.

Longford would go on to lose to eventual All-Ireland finalists Down in Round 2 of the qualifiers, but they still had their giant-killing win to sustain them through the next few years.

The recriminations came hard and fast in Mayo. O’Mahony resigned in the immediate aftermath of the game, insisting that the talent was within the squad to achieve real success but accepting that it would be someone else’s job to unlock it.

A decade on, it’s interesting to assess the lasting legacy of that day in Longford. Certainly, it was an unfortunate way for the inter-county managerial career of O’Mahony to end, given the successes he enjoyed first with Mayo, then with Leitrim and then with Galway. His return as Mayo boss in 2007 was supposed to be the last piece in the All-Ireland puzzle, but the Connacht title of 2009 notwithstanding, his four years at the helm were not deemed a success at the time of their conclusion.

But time has a way of changing how we view these things. O’Mahony, to hear him tell it, had been laying the building blocks for what would become the high-flying Mayo team of the 2010s. While the likes of David Clarke, Andy Moran, Keith Higgins, Conor Mortimer and Alan Dillon had been involved in the squad before his arrival, O’Mahony brought in a remarkable number of the players who would become household names in the county in the years ahead.

That day in Pearse Park, the Mayo team included the five named above as well as Chris Barrett, Ger Cafferkey, Donal Vaughan, Kevin McLoughlin, Seamus and Aidan O’Shea, Alan Freeman and Tom Parsons, all of whom would become central figures in the Mayo team in the following years.

O’Mahony, in the wake of the loss in Longford, maintained that despite the crushing disappointment of the defeat, his role had essentially been about handling the transition from one group of Mayo players to another.

“My term was about building a bridge between one team and another,” he said, “and I think time will prove that that bridge has been built.”

While at the time those may have sounded like the words of a man making his excuses, the decade since has proven that Johnno was onto something. 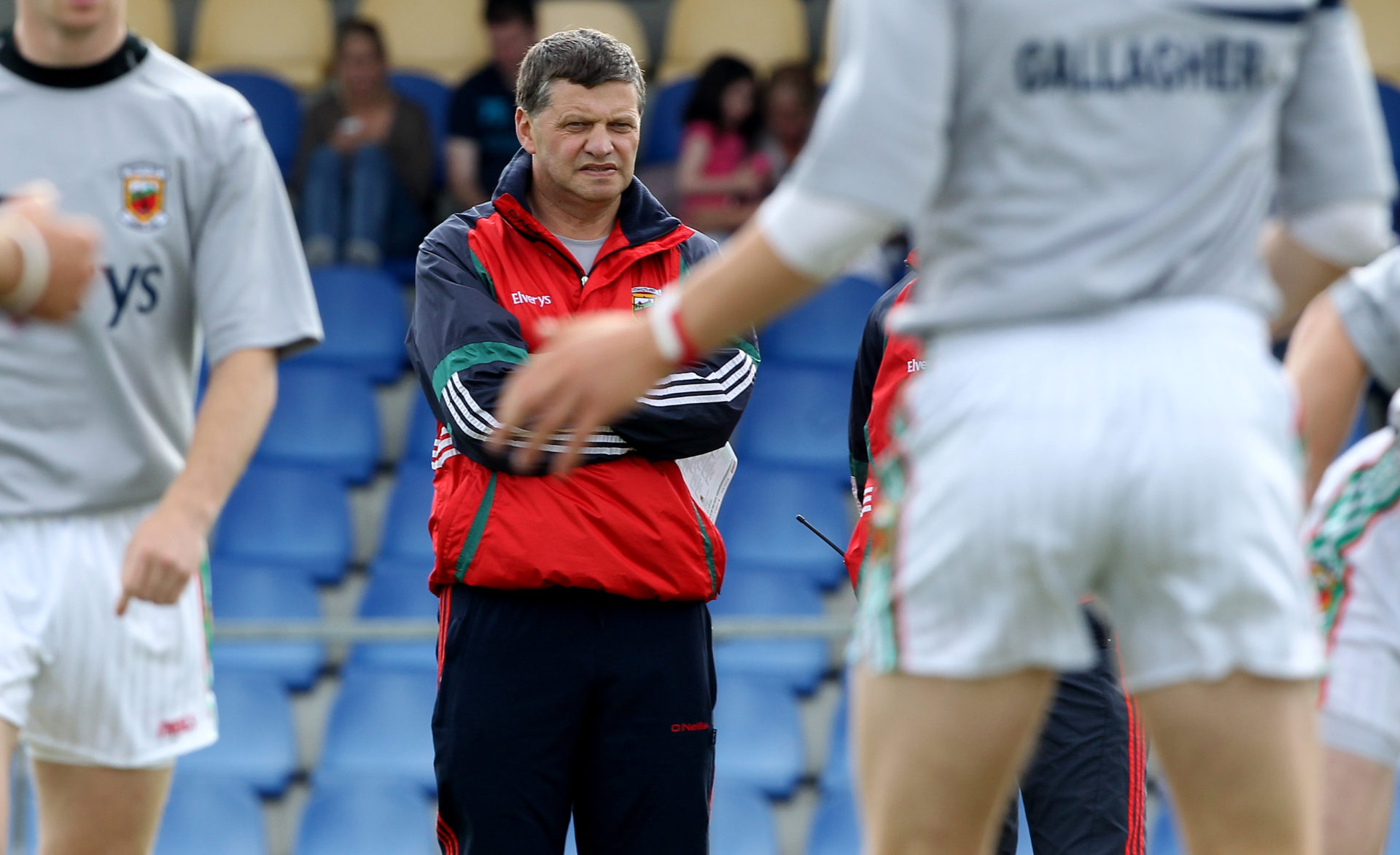 John O’Mahony watches Mayo warm-up in Pearse Park. It would prove his last game in charge of his home county. Pictures: INPHO/James Crombie

The defeat and O’Mahony’s subsequent departure also opened the door for James Horan to take over and, crucially, allowed him to step into the role at a time of relatively low expectations and public pressure. After losing to Sligo and Longford, nobody expected Horan to work miracles in 2011, so despite the wobble in Ruislip, Mayo’s reclaiming of the Connacht title and dethroning of All-Ireland champions Cork in the quarter-finals came as a welcome surprise to the county and set the tone for the decade to come. Nine of the team that started in the loss to Longford also started in the win over Cork barely 12 months later.

That’s the other notable thing looking back; the loss, ignoble as it was, didn’t end the careers of many of the Mayo players involved. It was the last championship appearance for Mayo for Billy Joe Padden, who would subsequently go on to play for Armagh, but otherwise Pat Harte and Liam O’Malley were the only players from the 19 who didn’t play championship again for Mayo.