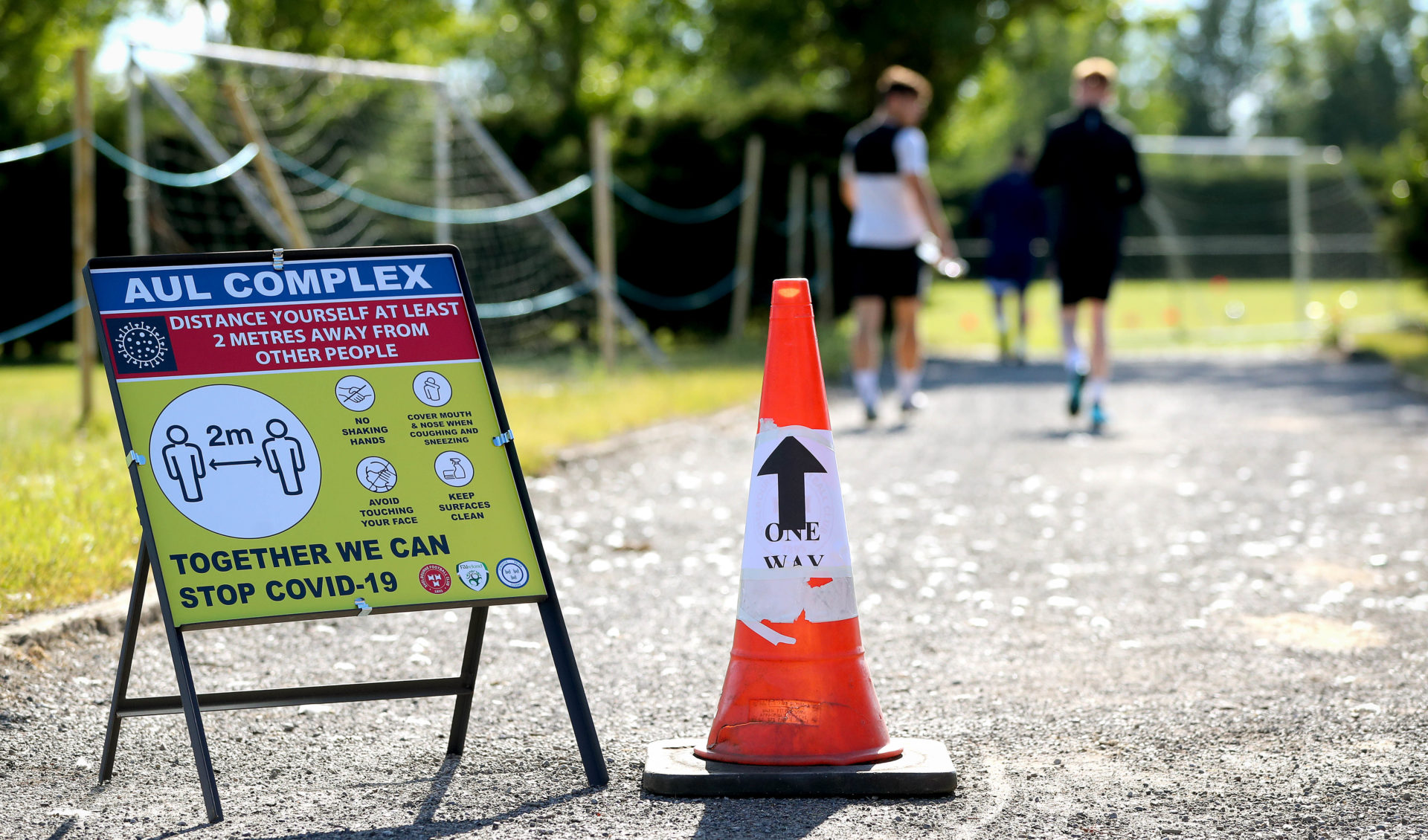 Mayo’s soccer players have returned to training in a very different environment, with strict distancing and hygiene measures in place. Picture: INPHO/Ryan Byrne

Clubs in the Mayo Football League have been hard at work over the last few weeks blowing off the cobwebs from their time spent in lockdown ahead of the newly rescheduled season, which begins with the first rounds of the Super and Premier Cups next weekend. Covid-19 put paid to the original season, which would have kicked off in March, but with the green light given by the Football Association of Ireland, clubs in Mayo are busy preparing for the new campaign.

It will include fixtures in the Super League, Premier League, League One and League Two, the Connacht Shield and Cup and the Calor Gas Cup and Shield. Westport United also have an enticing FAI Junior Cup quarter-final against Oliver Bond Celtic coming up on Sunday, July 26 in United Park.

Two footballers from Super League clubs have spoken to the Western People about their experiences of returning to training and how they and their teammates are feeling about the prospect of kicking off the new season.

Jordan Loftus of Castlebar Celtic and Gary Higgins from Ballyhaunis Town returned to training with their respective clubs in the past few weeks. In the months since lockdown began, 5k runs with results broadcast to their team WhatsApp groups has been the order of the day for both players, so both have enjoyed getting back into collective training in the last two to three weeks.

“We were all allowed to train together for the first time recently,” said Jordan Loftus. “Before that, we were split into different groups of eight or nine and there was a lot of fitness work. It was strictly no contact with social distancing involved. Once we got into the football side of things, we did phases of play where we didn’t go within ten yards of the next player. 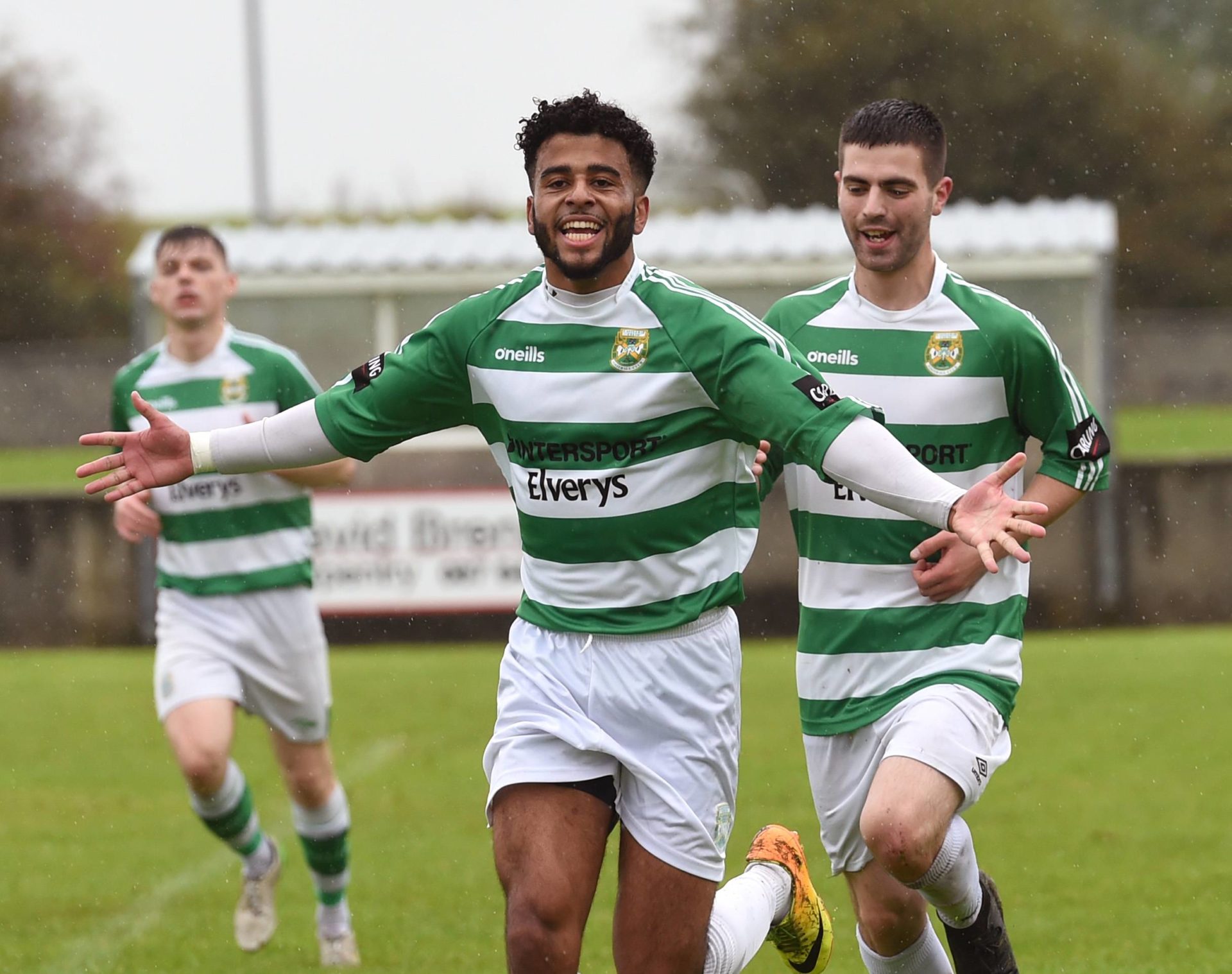 “Everything was done with distance. It was very strange and surreal but it was well done to be fair. Now we’re back to some sense of normality but we’re still trying to keep our distance where possible during things like sprints, just to be safe.”

Gary Higgins said there has been a strong emphasis on cardio as the team was essentially back to square one and were approaching this time period in a similar way to pre-season training.

“We’re trying to get back into the groove of things with two or three training sessions a week. With all that went on, it is like we’re back in another pre-season so we’re effectively starting from scratch again. We do a lot of cardio and a lot of the typical pre-season prep work and we’re mixing that with a bit of ball work to get those aspects of our game back to the right standard.

“It was all no contact until the rules changed recently. Prior to that, it was one hundred percent cardio but now we’re adding passing drills and the like, but there is still no major amount of contact.”

After such a long period of time off, there were bound to be some concerns regarding fitness but both Loftus and Higgins were happy to report that their respective teammates did not remain idle in lockdown.

“Fitness is looking good,” said Loftus. “Most of the lads were getting 5ks done every day and generally everyone is really fit. Last season we didn’t really get a proper pre-season due to our cup runs so arguably we’ll be more prepared this time around.

“We all really wanted to get back to having the craic of training as well, because we hadn’t seen each other. We were looking forward to getting back into games, back into the technical side of things more so than the fitness side but everyone has reacted well to be fair.”

Higgins added: “It can be difficult to train having been off for so long. You’re right back at square one and sometimes it can be hard to get the motivation going but once we did start back, all of the lads were enthusiastic to get out there.

“It has been different but enjoyable as well. You usually wouldn’t get too excited for cardio drills but most of the lads were excited to get out onto a football pitch again and get back to some kind of routine.”

Loftus, the top scorer in last year’s Super League as Celtic stormed to the title, said he is excited yet somewhat nervous about returning to play given the public health risk that still exists as a result of Covid-19, and is unsure if the season will be played to its conclusion.

“The new league format is really good and is probably the way it should be. I can’t wait to get going but at the end of the day, you only know what you’ve been doing and where you’ve been and not anyone else, and that includes teammates.

“If there is a second wave and a spike in cases, then football has to be secondary and health the priority. I want to be an optimist but I wouldn’t be too confident that we can finish it all this year.”

However, Higgins, a former Sligo Rovers youth team player, is remaining confident the right measures have been put in place to get all the scheduled games played.

“You miss the competitive side of the sport. It is grand being back to training but you want to test yourself so I’m looking forward to the games. There are always doubts and nerves but at the end of the day, you’d trust that clubs and players wouldn’t put people at risk.

“If someone thinks they have been in contact with someone with the virus, you’d know they wouldn’t step onto a pitch with 21 other lads. And there are good precautions such as sanitization and the scrapping of handshakes. I’m staying optimistic; you have to be when you’ve been so excited to get things up and running.”

One point the two players agree on is the positive mental boost they and their teammates have gotten from returning to play. Loftus said during the lockdown, football was a huge void from his life.

“It is so important to have sport back. Even the weekend sport finally returned to television made me so, so happy. It is crazy how happy sports can make you. Obviously you can watch sport on TV all you want but from a mental standpoint, nothing beats getting out there and playing the game yourself.

“It is a massive void from your life when you’re not playing and even getting the fitness work in feels great, it makes you sleep better at night. I can’t underestimate the value of sport in my own life and I think a lot of my teammates would say the same.”

Higgins added: “Being able to get outside and get fresh air, meeting up with the lads at the club. It brings such a different aspect to your life having been stuck inside for the last few months. It has been a huge lift for everybody.”

Castlebar Celtic begin the defence of their Super League title on the weekend of August 15-16 as they play host to Ballyglass, while Ballyhaunis Town will welcome Ballina Town. Prior to that, they will resume the season with the first round of the Mayo FA Super Cup on July 18-19.