Big Jack and me: What Jack Charlton meant to one Mayo man 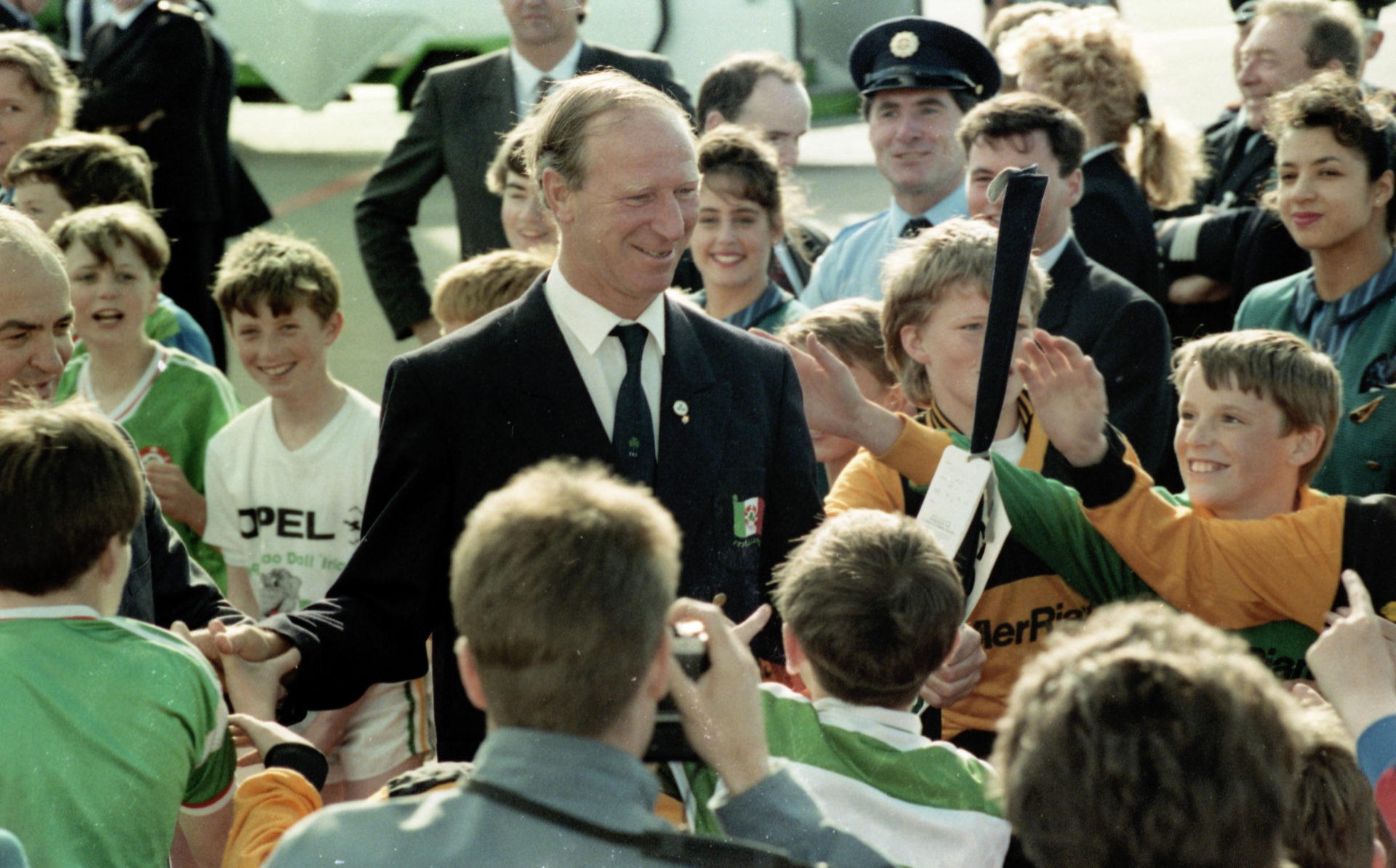 Big Jack has gone to the great Ridge Pool in the sky. What a man. He started life as a coal miner in the Ashington coal pits with his father, but it was the connection with his mother’s side of the family, the famous Milburn brothers, that saw Jackie climb from the mines and sign for Leeds United as an apprentice.

Jack debuted at 18 and was an average player in an average Leeds team. The arrival of Don Revie shook Leeds and Jack. Indeed Revie tried selling him, but both were stubborn men. Having made his debut in 1953, Jack was almost 30 when Leeds reached their first-ever cup final in 1965.

A very late developer, Charlton had won only a second division medal before the age of 30 but went on to win a league title, the FA Cup, the League Cup and Fairs Cup medals in Leeds’ famous white strip. But it was as the ‘Giraffe’ on Alf Ramsey’s World Cup-winning team in 1966 that Jack became equal to younger brother Bobby, whose very obvious skills were honed at Matt Busby’s Manchester United. The photo of the brothers running around Wembley, Jules Rimet trophy in hand, remains iconic to this day.

When Jack retired from playing he took over Middlesborough. They were a Second Division team cast in Jack’s metal. Tough and functional but good enough to gain promotion to the First Division. Amongst his players were Graham Souness, David Armstrong, David Mills and a big battering-ram centre-forward pairing of Alan Foggan and John Hickton.

Middlesborough, looking back, played the game a bit like Jurgen Klopp’s Liverpool team does today: high press, maximum work. Back then we thought that functional, those of us who worshipped Stan Bowels, Rodney Marsh, Alan Hudson and Tony Currie. 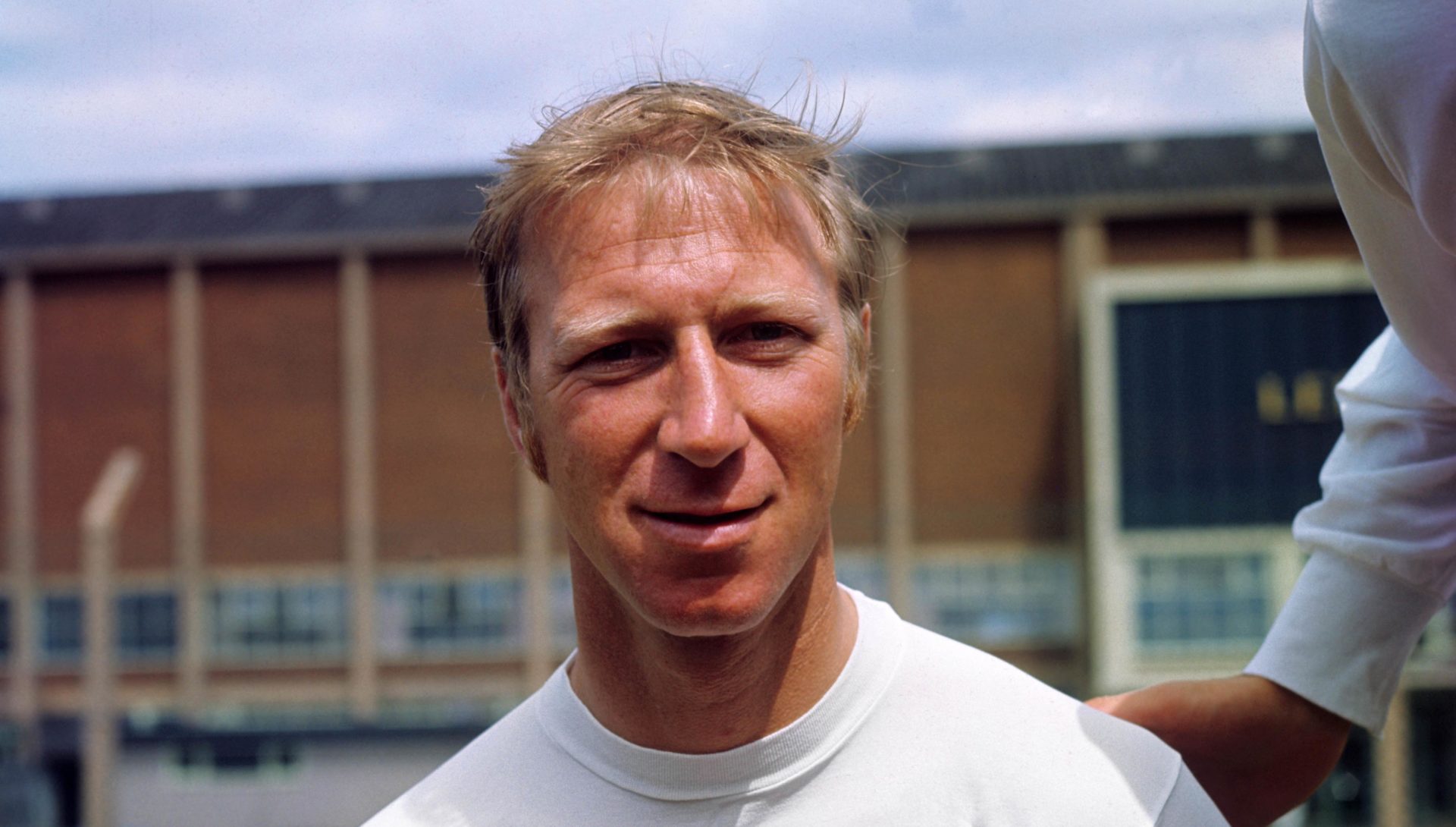 Jack Charlton during his playing days at Leeds United.

Newcastle didn’t fire for Big Jack, almost his hometown team, the playing field of his famous uncle Jackie Milburn. Jack simply buggered off, as he might say himself. Sentiment wasn’t his calling card.

After Denmark destroyed Ireland around 1986, the rather unlucky Eoin Hand departed. The FAI looked for a new manager. John Giles and Bob Paisley tied with, I think, ten votes apiece. In true parish-pump politics style, the bottom listed candidates were eliminated and, hey presto, Jack Charlton was elected. Figure that one.

As it turned it, it was a masterstroke. Ireland were to credibly perform in two World Cups and one European Championship. But it was Charlton’s managerial skills that underpinned those runs. Blessed with some of the most serious talent the nation ever had in Packie Bonner, Paul McGrath, Kevin Moran, David O’Leary, Mick McCarthy, Jim Beglin, Liam Brady, Frank Stapleton, Ray Houghton, Chris Hughton, John Aldridge, Niall Quinn, Tony Galvin and Ronnie Whelan, to name a few, Jack focused on the practical rather than the aesthetic.

Out went the silky skills of Brady, O’Leary and Stapleton. In came pragmatic tactics – no ‘fannying’ on the ball, quick transfers from back to front, chasing into corners and channels. ‘Put ‘em under pressure’ was Jack’s famous mantra.

And it worked. Many would love to have played it through the number 10 like Johnny Giles, getting 30 touches on the ball but ultimately doomed to the unhappy ending. That’s why Brady didn’t last under Jack, a great player but not what was needed.

Mick McCarthy was preferred to the silky ball-playing skills of David O’Leary. He transformed both Mark Lawrenson and Whelan, along with the gifted McGrath on occasion, into full-backs. The great 1988 victory in Scotland to propel us to Euro ‘88 had McGrath at 2 and Whelan at 3 along with Lawrenson at 7. It worked a treat.

The salad days of Euro ‘88, Italia ‘90 and the American odyssey of ‘94 were the high and turning points. It had run its course and both the Irish fans and Jack were reluctant to let go but the pragmatic football was no longer palatable, nor were players coming through of the same standard as those departing.

Jack left a hero. Always was and will be. Blunt, pragmatic and warm, a friend but never the best friend. Jack loved Ireland, and the Irish him. He loved to fish the Ridge Pool in Ballina. He even lived in the town, always respected, acknowledged but never suffocated. 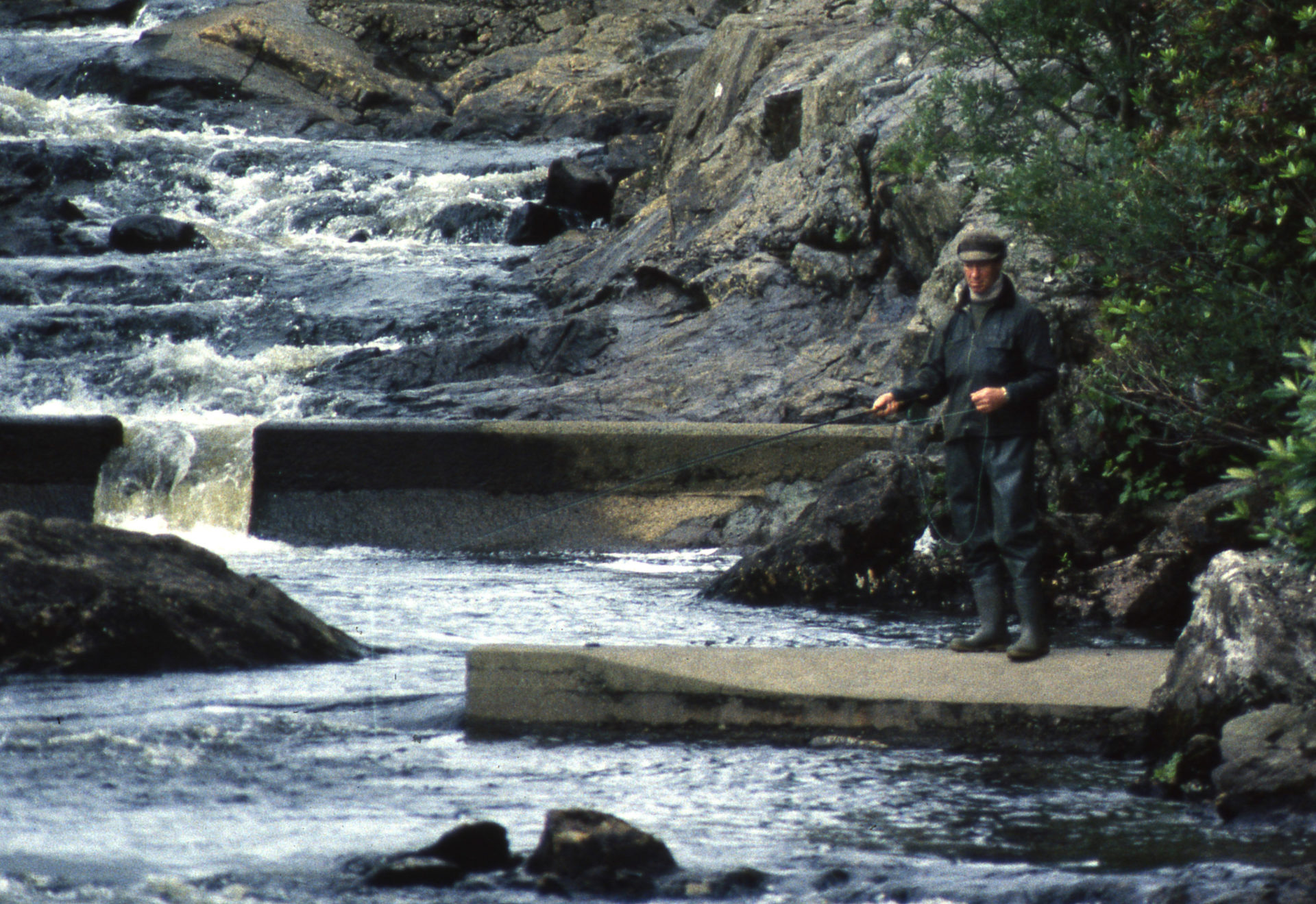 Jack Charlton taking time out as he enjoys a fishing trip in Mayo in 1990. He and his wife Pat owned a home in Ballina and Big Jack was frequently seen fishing the Ridge Pool of the Moy. Pic: Maxpix

Jack would have loved that. He was one of us. So when I heard of his death on Saturday morning, it jolted the soundtrack of my life.

I saw my first FA Cup final in the cozy confines of Mrs Sweeney’s kitchen in Blacksod lighthouse, West Ham v Preston North End, 1964. A year later we had our own television courtesy of Sylvie Sweeney and I watched Leeds v Liverpool with my mother. She called Charlton ‘Windy’ because the trainer was on winding him after a few tangles with Liverpool’s Geoff Strong and Tommy Smith.

She might have nicknamed him ‘Windy,’ but Jack wasn’t. A World Cup medal came a year later. However, it was the cup final of 1970 that sticks in my mind. Two games, both epics. Chelsea v Leeds. War, attrition and skill. Charlton at war with Osgood, Hunter with Hutchinson. Leeds were in control. Hutchinson then nudges Big Jack, who takes it personally, chases after Hutchie only for Osgood to steal an equalizer unattended. Mad, and brilliant, feral and silky, all blended over two epics in Wembley and Old Trafford for the replay. 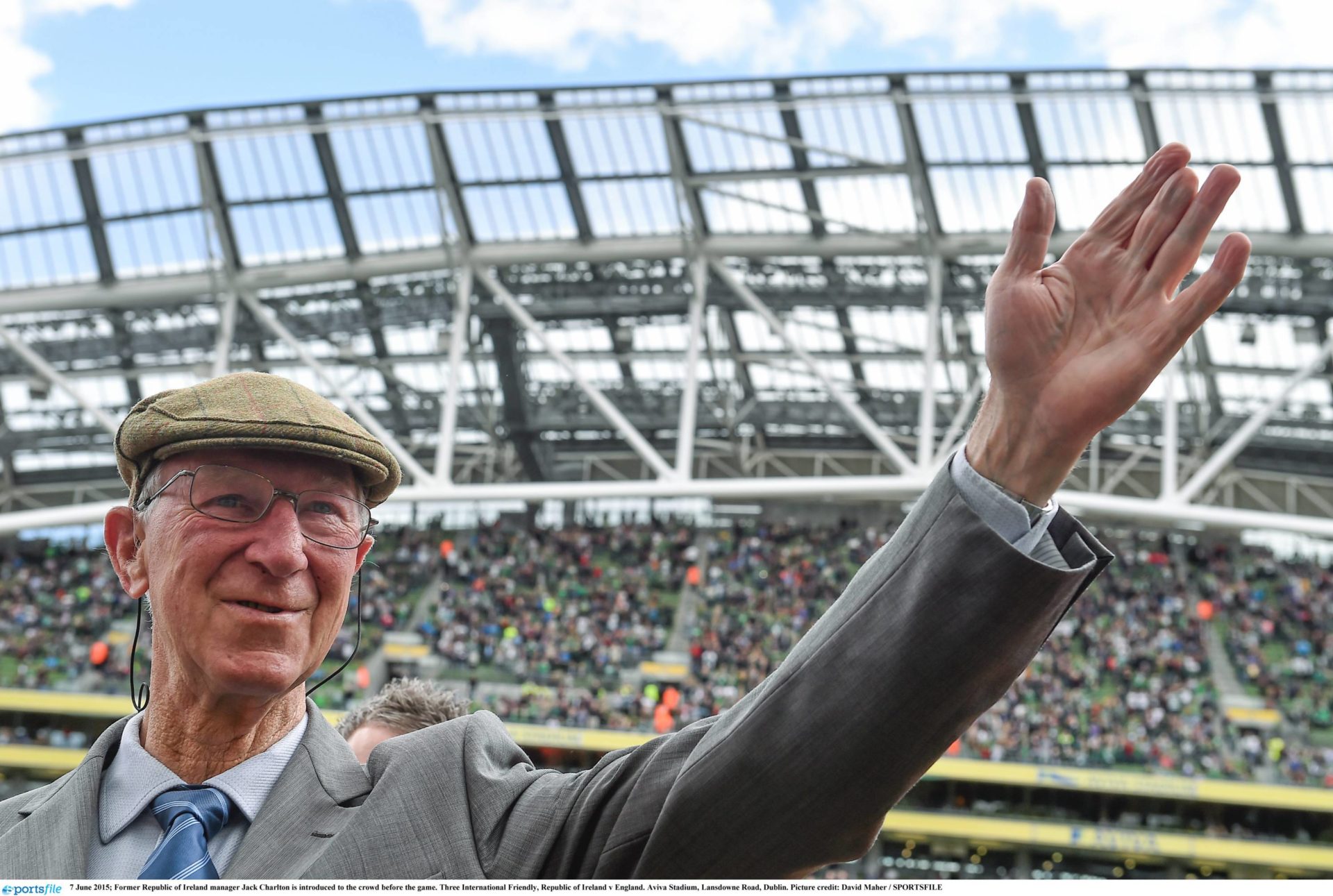 An honorary Irishman: Jack Charlton is introduced to the crowd before a friendly match between Ireland and England at the Aviva Stadium in 2015. Picture: Sportsfile

This year alone has seen the passing of Big Jack, Hunter, Cherry and Madeley. Gary Sprake and Billy Bremner have already left us. Chelsea lost Peter Bonnetti, The Cat, the same week as Norman Hunter. Peter Osgood, Ian Hutchinson and Peter Houseman all were all gone before sixty.

I can still recall the cordite of the 1970 Leeds-Chelsea war. It’s hard to credit that many of the actors passed away almost in a blur. The Giraffe of 1966’s glorious summer intersected in Irish life. My neighbour back east was involved with Jack and Ireland during that boom. Often a helicopter would land in the field near us to collect him and Jack. I often got a wave from a real-life hero as it went skyward.

From the pit village of Ashington, via Leeds, the World Cup of 1966, Ireland in 1988 and onwards, to standing in the Ridge Pool with the town’s kids smiling at a true legend, Ballina and indeed Mayo lost a good friend this week. A Dheis Dé Jack.