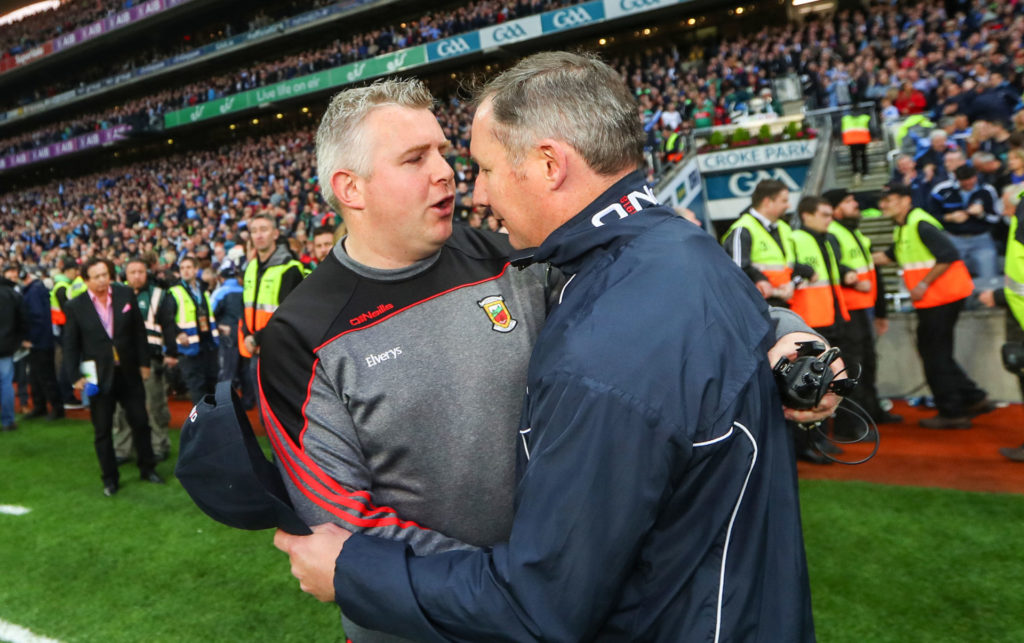 It’s unlikely to come as much comfort to the players and their supporters but the man who masterminded so much of the upset endured by the Mayo senior football team over the past decade has hailed the side as the best he ever encountered.
Jim Gavin won six All-Ireland titles as Dublin manager in seven seasons, and three of those triumphs came at the expense of Mayo. And speaking to Newstalk Radio today, he hailed not only the consistency of the Green and Red warriors but also their “exemplary” qualities.
Mayo ran Dublin to one point in each of the 2013, ’16 and ’17 finals, losing a replay both in 2016 and when facing the Metropolitans in the 2015 semi-final.
Gavin stepped down as Dubs boss several months after last season’s replay victory over Kerry, which secured his county an historic fifth All-Ireland title in-a-row.
“You would have to say that the Kerry team impressed us over both games and for a bounce of the ball they might have got away with a victory in the first All-Ireland last year,” he began, adding: “Mayo, definitely over the expanse of my time, those seven years, were probably the most consistent team and what a superb group of players.
“You can dot up any of the games, particularly 2017, it was so close so that particular group I have huge admiration for them. They are exemplary gentlemen.
“They really represent Mayo so well and are just really good footballers and play the game the way I like to see it be played. So they were probably, over the expanse of them seven years, the most consistent team.”
In what is a quite remarkable statistic, Dublin suffered just one defeat during Jim Gavin’s tenure, that coming in 2014 when Jim McGuinness and Donegal stunned the reigning All-Ireland champs in an ultra tactical encounter.
“I think that if you looked forensically at the style of the Dublin over each of the seven campaigns, there were always things that changed, there were always things that were added or taken away,” explained Gavin on the Off the Ball programme.
“If you looked at the way we played in some parts of the All-Ireland series this year, including in the final, it would have been similar to the model we used in 2014. A full-court press, really aggressive attacking football and there are obviously risks and reward going against a team like Kerry.
“If you look throughout the expanse of those seven seasons you’ll see little bits of those seven years blended in but the reality of it is that we played in 2013, we played that final, Mayo went man to man with us and it was a fantastic game but as the years progressed teams began to play a more compact defence against us.”