Fears in Mayo that government may resurrect RIC commemorations 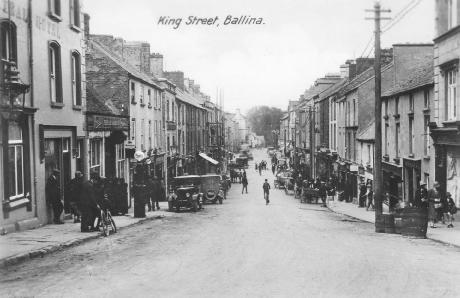 Ballina’s O’Rahilly Street in the days when it was known as King Street. The Black and Tans ran riot on the street in April 1921, vandalising numerous properties.

Elected representatives in the West Mayo area have been urged by a fellow Westport area councillor to join him in refusing to support or attend any event that would commemorate the Black and Tans or the Royal Irish Constabulary in the future.

Fianna Fail councillor Brendan Mulroy expressed fear that there may be an attempt to resurrect plans to hold the controversial commemoration. The original announcement of the commemoration caused a widespread public backlash and was cancelled by the previous Minister for Justice Charlie Flanagan following widespread government criticism.

Cllr Mulroy said: “I think this issue has been lost in the negotiations for the Programme for Government. I know from talking to people the last couple of weeks that the issue still concerns them greatly. I’ve been sent newspaper cuttings from throughout the years of families that were destroyed and I want the government that is in power to not come back and attempt to commemorate the Black and Tans in this country.”

“I want to put it on record in this council chamber that we will not be supporting or attending any commemoration of this kind.”