The 1984 hit song, ‘Purple Rain’ by Prince echoed across the River Moy from Crocketts on The Quay in Ballina on Monday evening. 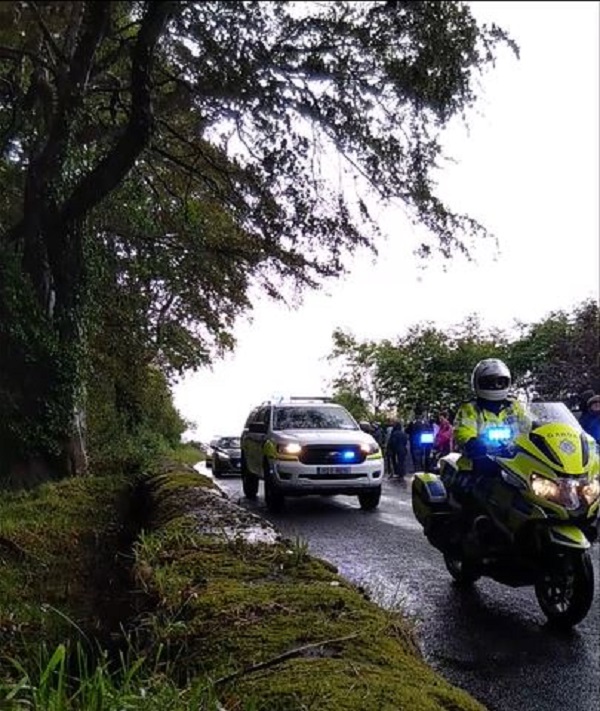 The cavalcade of garda vehicles drives by the spot where Det Gd Martin Mitchell passed away suddenly one year ago.

It was the latest in a series of heart-breaking tributes marking the first anniversary of the sudden passing of the popular local Det.Gd. Martin Mitchell.

Martin died suddenly while out jogging in Belleek Woods near his home on the evening of July 6, 2019.

Members of An Garda Siochana and other emergency services from all over Connacht came out in huge numbers to perform a drive-by in honour of their fallen colleague at Knockatinnole last Sunday evening, July 5.

Horrendous weather conditions did not deter the fleet of approximately 40 vehicles from passing the spot where Martin died in a very touching tribute that drew large crowds of local spectators.

It is understood that a similar honour was afforded several weeks ago for another late Mayo member of the force, Gd John McCallion from Swinford, whose sudden death occurred just a few weeks before Det Gd Mitchell.

Dermot added to the tributes to Martin yesterday evening by playing several of his favourite songs from outside Crockets Bistro at The Quay Village in Ballina.

He explained that he simply hoped the music would be heard across the town and – for just a few moments – symbolically fill the huge void that Martin’s death has left in the lives of all those that knew him.