Emily is chasing the American dream 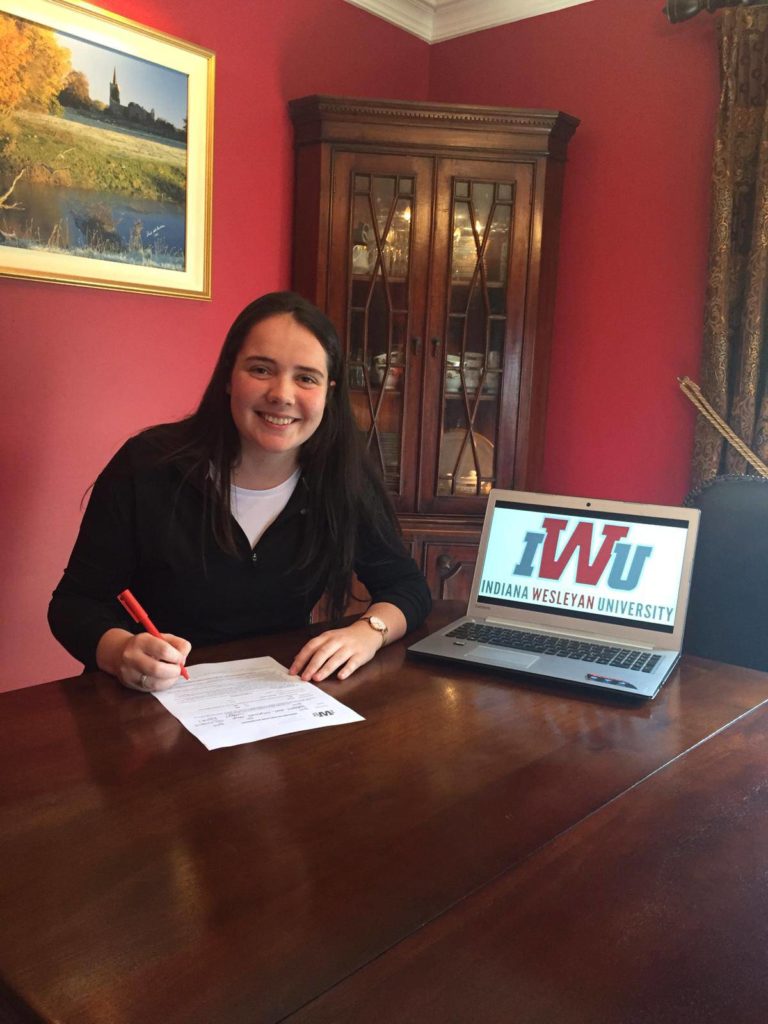 Coming from a family steeped in Mayo football heritage, it was no great surprise that Emily Connolly showed remarkable sporting talent from a young age. She is the daughter of Ann and former County Board chairman Mike Connolly, and the niece of former Hollymount and Mayo footballers Noel and Ray. As she puts it herself: “In the family I come from, I think we learned to play football before we learned to walk!”

Growing up in Hollymount, Emily spent most of her free time kicking ball with her cousins. She also swam competitively with Claremorris Swimming Club and spent a few summers experimenting with golf, but it was in a sport with no great tradition around South Mayo that she found her true calling.

Emily, aged 20, is currently in the early stages of a four-year tennis scholarship at Indiana Wesleyan University in the United States. She started in January and was just finding her bearings before Covid-19 struck, suspending the college year and sending Emily home to Hollymount in late-March.

She’s due to return to Indiana at the end of July ahead of the resumption of the college year but in the meantime, she’s been keeping her game sharp at her home club in Claremorris. It’s been a welcome period of rest and relaxation after a hectic few months.

“It’s great being home, out here in Hollymount we’ve loads of space so we’re not cooped up,” said Emily this week. “I’ve just been training away, doing all I can at the minute. The weather is nice so it’s a great time for tennis.”

She’s been training with her old clubmates Shauna Heffernan and Dearbhaile Roe, who collectively formed an uncommonly talented group of young players coming up through the club together. Heffernan is also on a scholarship in the US, at Boise State in Ohio, while Roe is playing at the University of Limerick and is also Lady Captain at Claremorris.

“Tennis isn’t very popular around here but I’m lucky to have people like Dearbhaile and Shauna who get up every day wanting to get better. It’s great when you can go into that environment. It’s what we’ve been doing for a long time. We’ve all been away in different places but it’s nice that we can come back together, the three of us. It’s like old times again,” said Emily.

“We’re competitors, but in a way, we’re like our own little team. Everyone is trying to pull together. We can help each other out with little parts of our games, we’re so long in the game now that we kind of have an eye for it. It’s been great.” 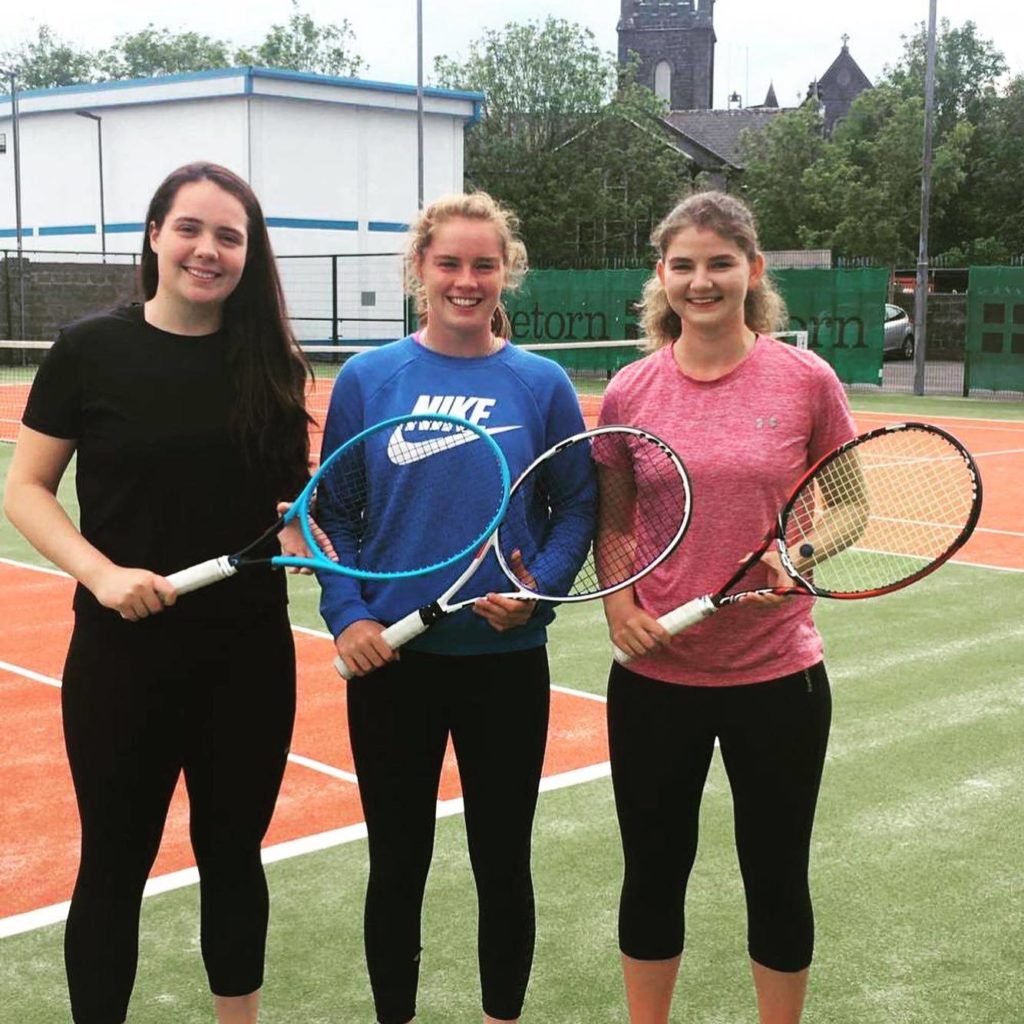 Emily was a relative late-comer to tennis, only picking up the racket aged 10. Lucy Pencova was her first coach in Claremorris before she came under the tutelage of a coach in Castlebar, Gareth Barry, who has since become the Performance Coordinator for Tennis Ireland. Barry coached her through her teens as she began to compete on the national stage for Claremorris and Connacht. She was part of the club team that won the Connacht League for the first time last year.

It was Barry who first planted the idea of a tennis scholarship in the US, and while Emily admits that for a long time she didn’t truly believe it was possible, a change in mindset in recent years made her reassess her options.

The process began to take shape last year. Emily sat her Leaving Cert in Mount Saint Michael last June and the SATs (the American equivalent of the Leaving) in October. She signed with All Sports Recruitment, a Kildare company headed by Mark Finnegan, and produced a video of her tennis highlights, essentially a resume of her skills. She then began to approach US colleges.

“You get responses from different coaches to take a phone call. They ask you what’s important to you and you get to ask them about their programmes,” she said.

“I think I had about seven or eight offers in the end. I narrowed it down to three; the one I’m in currently in Indiana, one in Philadelphia called Le Salle University and another one in South Carolina.”

She settled in Wesleyan in Marion, Indiana, with the vision offered by her coach Eddy Shigley of a close-knit, familial college environment proving the decisive factor.

“Coach Sigley is a very friendly guy, he’s almost like a guy you’d meet in Hollymount,” she said. “It wasn’t just all about winning, it was about me as a whole. Tennis is a huge part of my life and I want to do as well as I can but I also want to get my degree and think about where I might want to go after that.

“The two things he said that resonated with me were that the team atmosphere was like that of a family and that the campus would soon start to feel like home. A lot of people want to go to the best Division 1 university, and that is hugely important, but I didn’t take my D1 offer. I took the Indiana offer, which isn’t D1, because it’s all about being happy. You could be out there playing the highest level of tennis but not be happy, finding the school hard or finding the place scary or uncomfortable.” 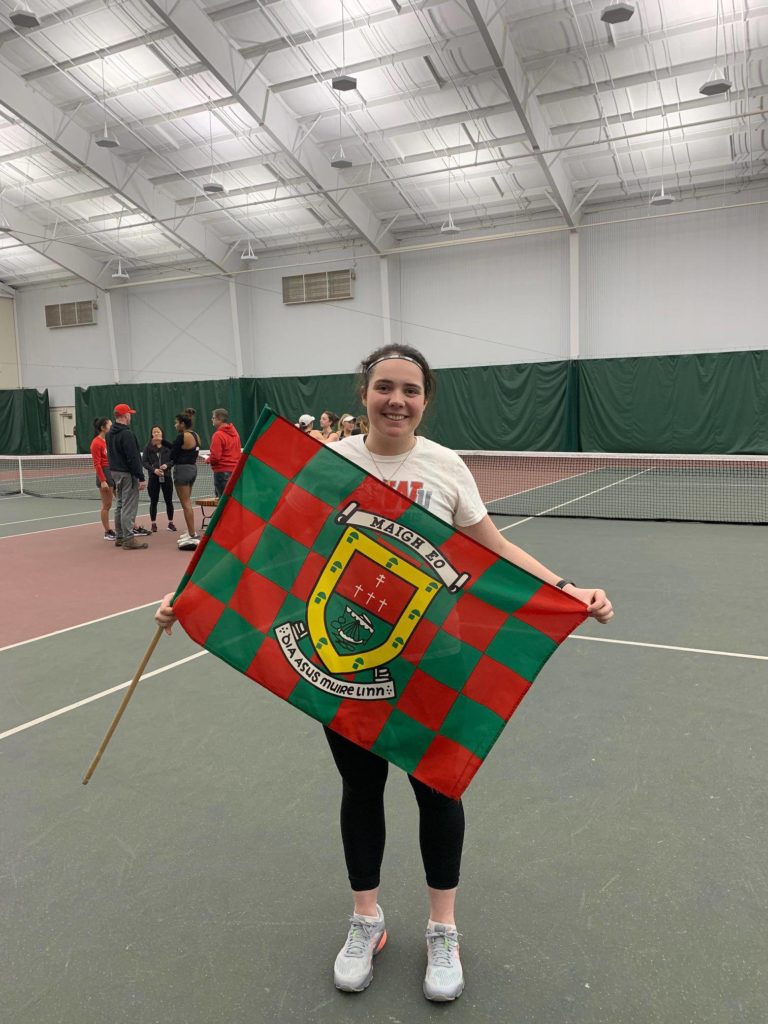 Emily Connolly proudly flies the Mayo flag at the Indiana Wesleyan University campus in the US.

She flew out early in the new year and quickly began to feel at home.

“Like every change in life it took some time to get used to, but I genuinely love being there. It’s a great campus. They’ve got state-of-the-art facilities, things that kids from Hollymount only dream of,” she said.

“We train all the time, in the gym and on the court, and then we travel most weekends. I get to see different places. We went to Ohio, to Wisconsin, and we went to Arizona for spring break for two weeks too.”

On the academic side of things, Emily is majoring in business and sports management. Wesleyan is a relatively small liberal arts school that offers its students a broad range of general education classes.

“I’ve taken classes in theology, sociology, psychology. You get to study a lot of different subjects,” said Emily.

“It was busy now, there were a lot of classes and a lot of late nights studying. A lot of hard days, but they just make the good days even sweeter.

“Overall it’s been great. The classes aren’t that big because it’s quite a small university, so the professors get to know you. It’s a real personal experience and you get to meet people from all different backgrounds. There’s a Sri Lankan girl on my team, and a German girl. You can see how the rest of the world lives life.”

She is still in the early stages of her scholarship and for the time being, her focus is simply on constantly improving as a tennis player and achieving her degree. But that hasn’t stopped Emily from glancing ahead to what could potentially lie in the future.

“I’ll keep working and maybe when I finish up my degree I can look at becoming an assistant coach in a university over there, or maybe even possibly go on the professional tour for a year or two, to give that a shot. Everyone has a dream of being a professional tennis player, so maybe that’s something I can do.”

The hard work resumes in the next few weeks; she is due to fly back to the States on July 28 and will have two weeks of quarantine before pre-season begins again on August 14. From there on, who knows where the road might take her?

“I like to not limit myself,” said Emily. “Hard work can get you anywhere if you set your mind to it.”