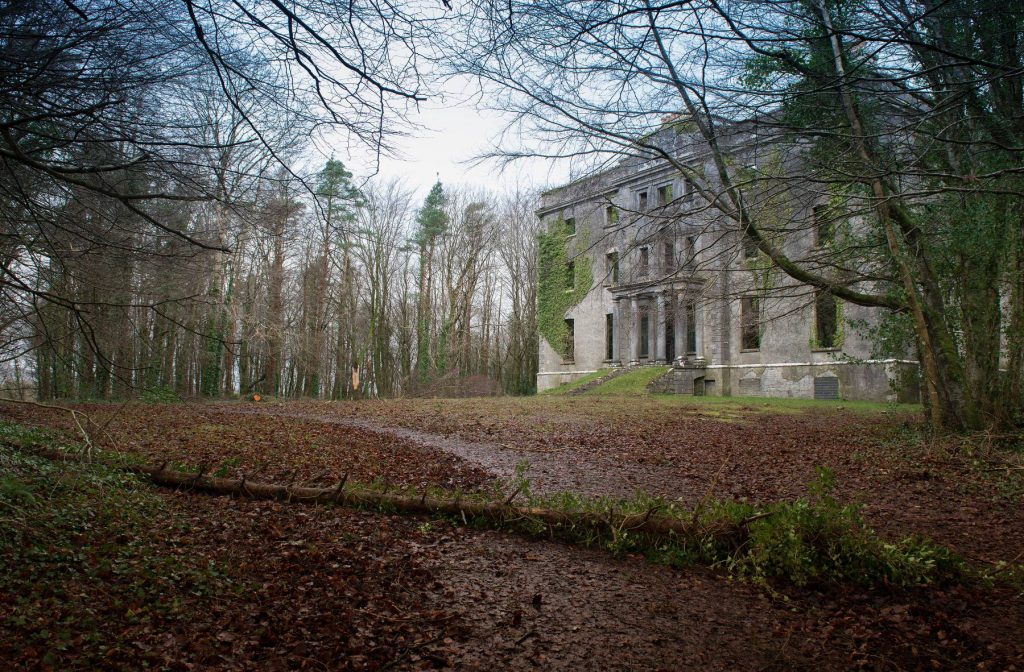 The first phase of development works to transform the grounds and gardens at Moore Hall is currently underway at the historic estate. The works include the restoration of the Walled Garden, which had fallen into disrepair, as well as new visitor facilities including walkways, seating, play areas and signage. Funding of €350,000 for Moore Hall was granted earlier this year under the Rural Development (LEADER) and Cross Border Co-operation Programmes. The works, which are being carried out by Westport based contractors Cunningham Civil and Marine, will be completed by the end of July.

The restoration of Moore Hall and putting it on the tourism map has been a long-standing aspiration of the local community according to Walter Hughes, chairman of Carnacon Community Development Association.

Robert Coyne, Executive Engineer with Mayo County Council in charge of the works, says that the development is a new chapter in the story of Moore Hall.

“The current works are focused on restoring the grounds and walled garden. The walled garden was dilapidated, its wall breached in numerous locations, the dovecote was crumbling away and the original pathways and garden lost.

“We are keen to bring it back as much as possible to its former glory as a place for people to visit, explore and enjoy.”

The new works include storyboards which will tell the story of Moore Hall, the Moore Family and their role in the history of the Irish nation. 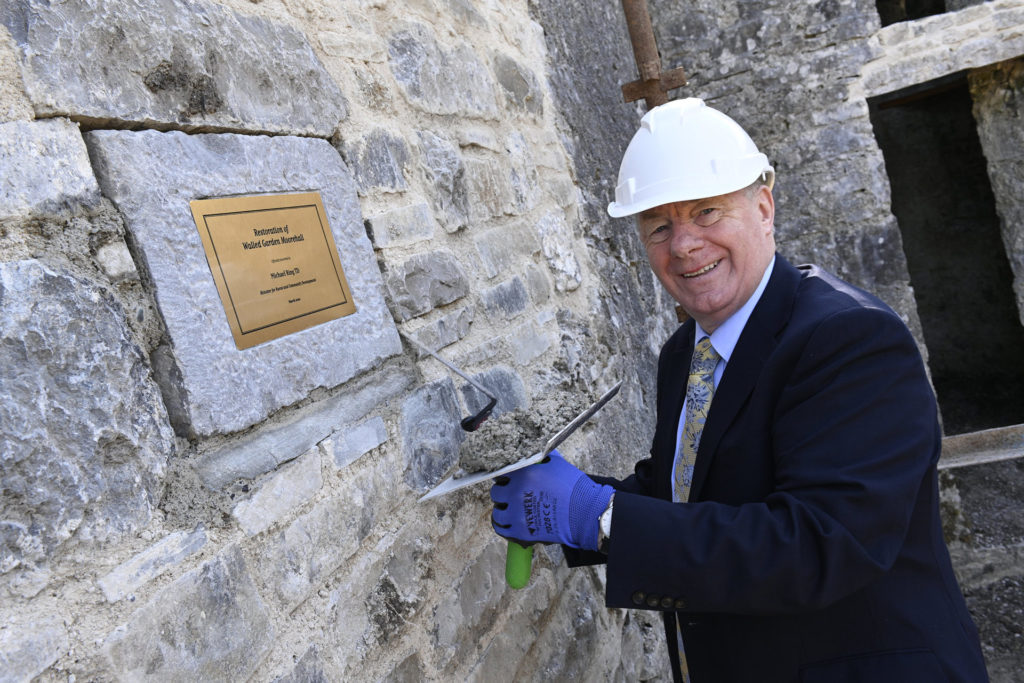 Michael Ring TD at the launch of the restoration of the walled garden at Moore Hall.

The regeneration of Moore Hall is being carried out at the same time as the regeneration of another historic location – Derrymore House – near Newry, County Armagh under a cross border cooperation project between Mayo LAG and Mourne, Gullion and Lecale Rural Development Partnership. Both Moore Hall and Derrymore date from the same period and share similar history. Moore Hall, built in 1795, is set on over 95 hectares of forest overlooking Lough Carra. It was the ancestral home of John Moore, President of the Republic of Connacht, during the 1798 French invasion of Ireland, an event which precipitated the introduction of the Act of Union in 1801.

Mr Gerry O’Neill, CEO of South West Mayo Development Company and a member of the Mayo LEADER Local Action Group, said: “I am very pleased to be associated with this project, which is an excellent example of a LEADER community project involving as it does the local community, local authority, local heritage and historical bodies in a collaboration that will greatly enhance the site. We are delighted to have played a part in contributing to the restoration of this historic and significant piece of Mayo heritage. We look forward to seeing the works completed and being soon able to walk the grounds and enjoy the unique atmosphere of Moore Hall.”

Derrymore House, built in 1787, is set on over 100 acres of parkland and woodland near Newry and was the country lodge of Isaac Corry, MP for Newry and the last Chancellor of the Exchequer before the Act of Union. Ms Norita Clesham, Community Project Officer with South West Mayo Development Company, said that both Moore Hall and Derrymore shared similar topography and historical contexts.

“The cross border funded project gives local communities in Mayo and Armagh an opportunity to foster closer ties and gain a greater understanding of our different traditions and shared history,” said Ms Clesham.

A Masterplan to preserve and develop the very important environment and historic landscape at Moore Hall will set out a long term vision for the area as an internationally important cultural heritage attraction and nature reserve and is expected to be launched in August.

“The Masterplan will set out a blueprint to preserve and develop the site in a sensitive way with a range of restoration works which will be undertaken over the coming years including restoration to the grounds and the buildings and provision of new trails to connect to the neighbouring amenities and attractions in the area,” said Mr John Magee, Director of Services with Mayo County Council.

“The NPWS are delighted to be part of the project,” added Mr William Cormacan, Regional Manager, National Parks and Wildlife Service.

Moore Hall and Lough Carra are internationally important sites for nature conservation and will be a jewel of the proposed Joyce Country and Western Lakes Geopark. The Masterplan being developed between the Council and the NPWS will set out the framework for the future development of Moore Hall and Lough Carra, while upholding the ecological integrity of the area.