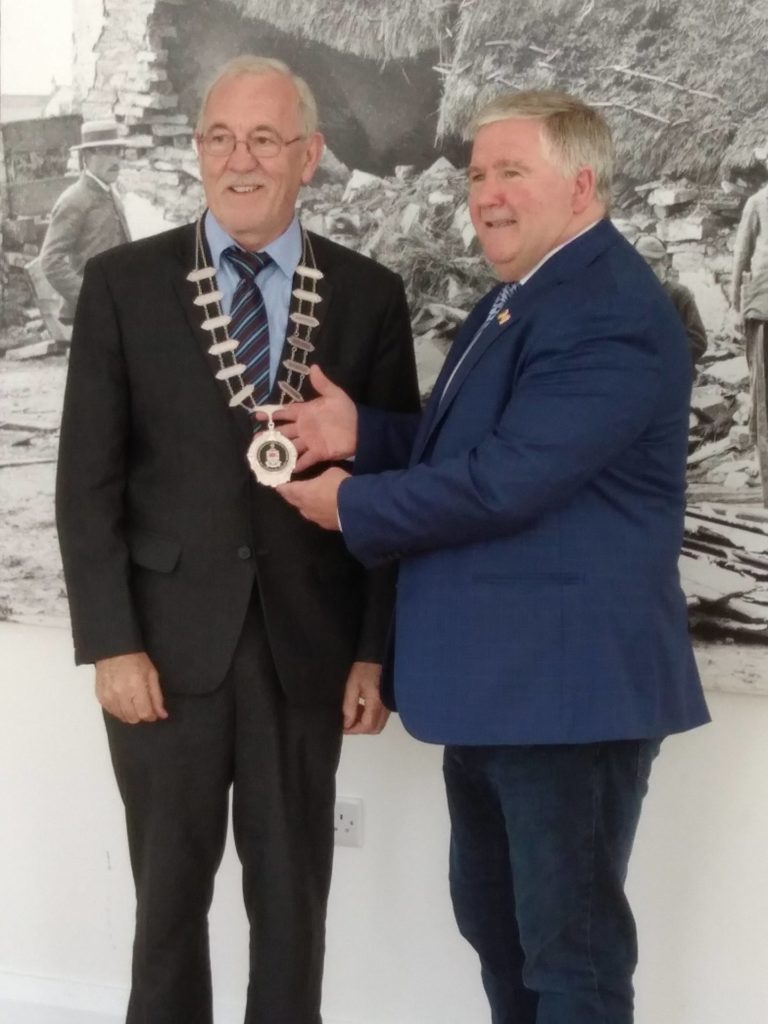 Outgoing Cathaoirleach of the Ballina Municipal District, Cllr Michael Loftus hands over the chain of office to Cllr Seamus Weir who was elected unopposed to the role at the district AGM in Crossmolina last week.

The newly-elected cathaoirleach of the Ballina Municipal District has vowed to be strong on addressing traffic issues in the north Mayo capital during his term in office.

Independent Knockmore-based Cllr Seamus Weir was elected to the role of Cathaoirleach at the AGM of Mayo Co Council’s Ballina Municipal District last Wednesday. Cllr Annie May Reape is the new Leas Cathaoirleach.

Cllr Weir said he looked forward to working hard with his fellow councillors and council officials to help the Ballina Municipal District get through the tough and difficult experience of Covid-19 and stressed that progressing the planned Ballina orbital route and reviewing the town’s traffic system would be among his priorities.

The AGM was hosted in Crossmolina — the hometown of the outgoing Cathaoirleach, Cllr Michael Loftus.

Thanking his family, fellow councillors and council officials for their support, he said the hosting of Other Voices in Ballina last February was a highlight of what had turned out to be a strange year.

Cllr Loftus said Mayo Co councillors and officials work hard to improve the lives of the people of the district through various means. While money is always an issue, great things can be achieved through teamwork.

Noting the accumulated losses that the council is expected to face as a result of the Covid-19 lockdown, Cllr Loftus said he hoped that central government will provide additional support and urged Mayo’s national politicians to pursue this.

He paid tribute to all those who have passed away during the course of the pandemic, saying it had been particularly hard for everyone not to be able to commiserate with the bereaved.

The other councillors and council officials praised the dedication, passion and dignity Cllr Loftus had brought to the role of Cathaoirleach.