A taskforce is to be established to address Ballina’s high commercial vacancy rates.

Almost one in four commercial units in Ballina are empty compared to Westport where the figure is one in eight.

He was responding to Cllr John O’Hara’s call for a plan to address the “disgraceful appearance” of the approach road into Ballina from the Foxford/Dublin direction. 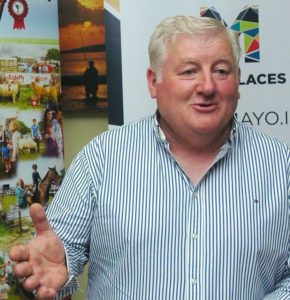 Cllr O’Hara was particularly critical of the appearance of part of the Irish Rail property where recently felled mature trees had revealed rubbish, grass and briars, and the former Duffy’s Bakery and former pet shop premises and adjoining houses.

“Can we get the environmental section to put a plan in place for all of that area including the old Duffy’s Bakery?”

Cllr Mark Duffy supported Cllr O’Hara’s motion, saying the Foxford Road sets the whole tone for the town for anyone approaching from that direction.

Cllr Jarlath Munnelly agreed and suggested the council investigate the feasibility of acquiring and replacing existing vacant houses and replacing them with new social housing which would really serve to regenerate that area of town.

Cllr Seamus Weir was also in favour of the council investigating the potential for creating new social housing in the area while Cllr Annie May Reape also spoke in support of the motion, noting that Teeling St had been effectively refurbished in recent years.

Mr Gilligan said it was unfortunate that Ballina has one of the highest commercial vacancy rates in Connacht and proposed that the councillors work to establish a cross-agency taskforce to address the issue locally.

Declan Turnbull, manager of the Ballina Municipal District, revealed that discussions have been ongoing between the council and Iarnród Éireann about drafting a plan for the area in the vicinity of the Gala store but that any proposed works would be subject to funding availability.

He also revealed that the old Duffy’s Bakery and former pet store had been bought by a Castlebar company which is understood to be currently drafting plans for the properties.