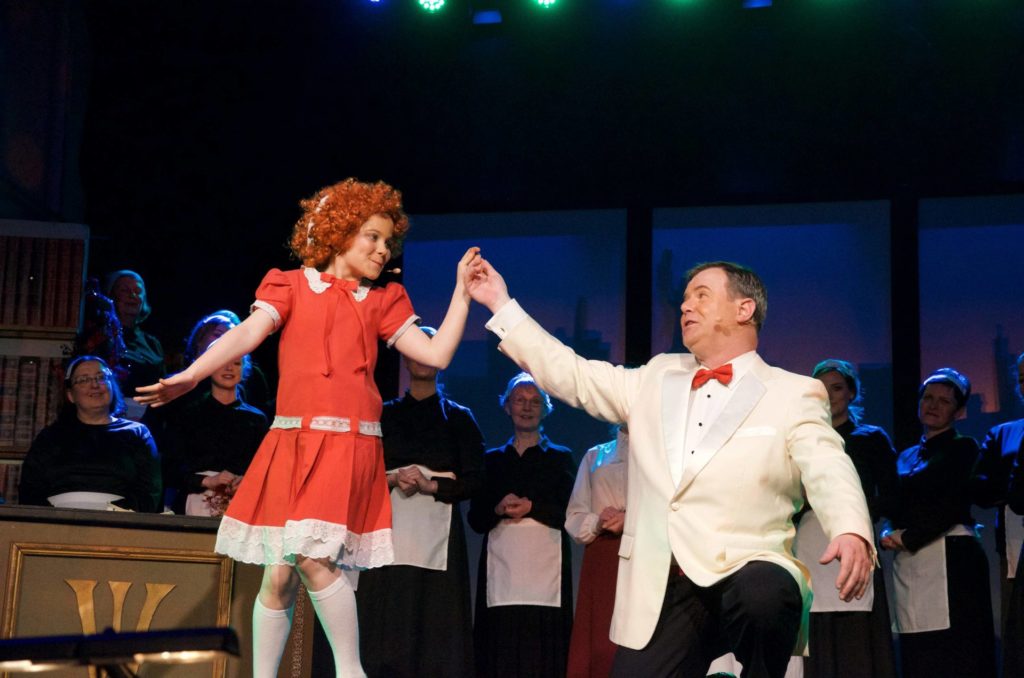 Rachel Gallagher as Annie and Ronan Egan as Oliver Warbucks in ‘Annie’ as performed by Castlebar Musical and Dramatic Society. Picture: Alison Laredo

A young Ballinrobe girl who captured the hearts of audiences in Castlebar for her portrayal of Annie in the musical of the same name has received a nomination in the Association of Irish Musical Societies (AIMS) awards.Rachel Gallagher (11) from Ballinrobe is the daughter of Margo and Patrick and a student of St Joseph’s National School in the town. Earlier this year, aged only 10, she charmed audiences when she took over the lead role in Castlebar Musical Society’s production of Annie, a performance that has won her a nomination for Best Female Voice. Rachel also played Jemima in Ballinrobe’s staging of Chitty Chitty Bang Bang last year.

Other nominations went to Ballinrobe Musical Society’s Eoin Mullins who was nominated for Best Male Singer for his role in the society’s production of The Pirates of Penzance, with Sean Costello Snr nominated for the Unsung Hero award.

Deirdre Lee of Claremorris Musical Society has been nominated for Best Musical Director following her group’s production of Little Shop of Horrors. A music teacher at St Joseph’s Secondary School in Castlebar, Deirdre was recently nominated for Best Musical Director in the inaugural Stagewise School Musical Awards for the school’s production of All Shook Up.

Niall Conway, who is a regular on the Ballinrobe stage, was also nominated for Best Male Comedian for his portrayal of Max Bialystock in The Producers, staged by Tuam-based Marian Choral Society. That show is also shortlisted for Best Choreography.

The awards ceremony has been postponed from its normal June date to September 18 next in Killarney.