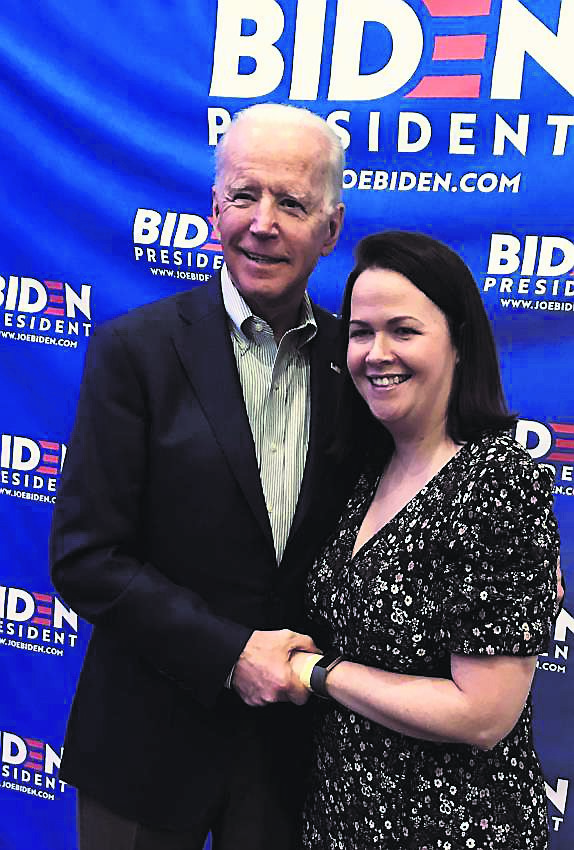 Laurita Blewitt on the campaign trail with US presidential hopeful Joe Biden.

Democratic US Presidential candidate Joe Biden is eyeing a visit to Ireland within months should he defeat current President Donald Trump in the election this November.

The former vice President to Barack Obama has roots in Knockmore, County Mayo from where his great-great grandfather Edward Blewitt and wife Mary emigrated over 160 years ago.

His mother Catherine ‘Jean’ Biden (nee Finnegan) and the Finnegan connection can be traced back to the politician’s great-great grandfather who emigrated from the Cooley peninsula in Louth in 1850.

He came to north Mayo four years ago when he spent time in the area where his ancestors were born and then returned west in September 2017 when he turned the sod on a €10 million Mayo-Roscommon hospice project in Castlebar. A plaque was unveiled in memory of his late son Beau, who died from the disease.

The Democratic candidate has proudly referenced his ancestry throughout his career.

His cousin Laurita Blewitt, who spent time on the campaign trail with Biden prior to the Covid-19 outbreak, said that he recently told her, “My priority as President will be to come to Ireland.”

Laurita added, in today’s Irish Daily Mirror; “He has a great love for Ireland. He was reared very much with Irish roots and he’s very much Irish at heart. We’d be thrilled and we would be very proud to see him back as US President.”

Laurita travelled to America in late- February this year and worked on Mr Biden’s campaign team.

Laurita, who works with the Mayo-Roscommon Hospice is hoping to return to America over the coming months. She said that Biden is deeply aware of his Irish roots.

“He quotes a lot of Irish poets and Irish writers when he speaks and when I was actually out there the first night we were in Chinatown in Vegas and he was obviously speaking to a big emigrant population and he brought me up on stage with him and introduced me after he spoke about how the Irish were treated when they left Ireland and how he really wants to represent the minority in America.”

“He knows how difficult and he knows the challenges they faced because he’s seen how Irish people were treated. So, he’s very much in touch with his Irish roots and his Irish family.”