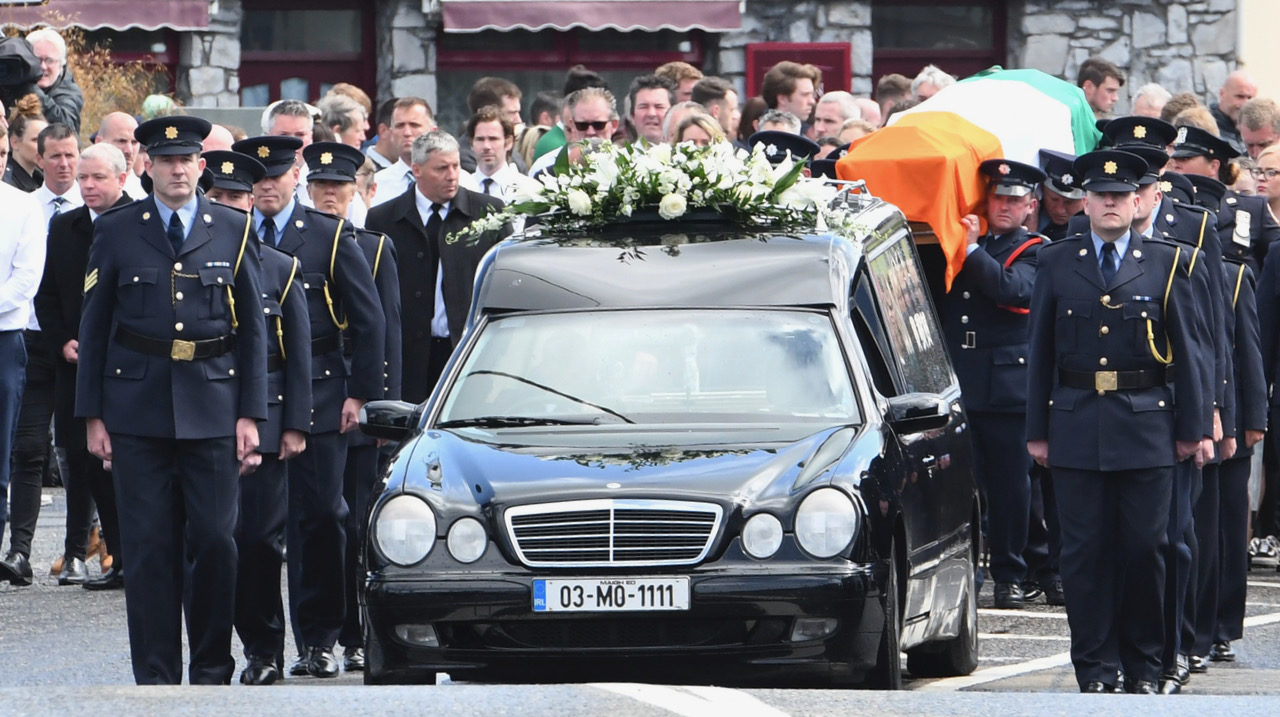 The funeral cortege of Detective Garda Colm Horkan makes its way through his hometown of Charlestown yesterday.

A silent calm struck the town of Charlestown shortly before midday on Sunday. The rain, which later fell with divine ferocity, held off as the coffin of murdered Detective Garda Colm Horkan, draped in the flag of the country he gave his life to, was carried through the streets of his hometown.
For more than two decades Colm Horkan shouldered the burden of preserving the peace in the communities of Ballaghaderreen and Castlerea. It was in this role, in a final act to keep the public safe, that Detective Garda Colm Horkan lost his life, shot multiple times with his own gun.
On Sunday, he lay atop the shoulders of his brothers and garda colleagues, while his family, community and beloved Sarsfields GAA walked behind him. A Liverpool supporter, his football team’s motto, ‘You’ll never walk alone’, summed up the man, St James’ Church and mourners across the country heard.
“He never let any of his family walk alone,” Monsignor Tommy Johnson, Parish Priest of Charlestown, said.
Father Johnson said the bullets that rang out across the streets of Castlerea on Wednesday night echoed “right across the country” in the days that followed. Before his state funeral service began at 12 noon, the nation observed a minute of silence for the 89th Garda killed since the foundation of the State.

Members of the local divisions of An Garda Siochána shoulder the coffin of Detective Garda Colm Horkan along Church St in Charlestown.

Minister for Justice Charlie Flanagan was in attendance, as were politicians from across the two counties most affected by the tragedy, Roscommon and Mayo.
Monsignor Tommy Johnson spoke of first hearing the news of the death of a Mayo Garda in Castlerea. He said he felt pity for the priest who would have to conduct the funeral. “Little did I think I would be that priest and that the Detective Garda was Colm Horkan.”
Garda Commissioner Drew Harris said it was with “immense sadness but also privilege” to speak at the funeral of a man who “epitomised” what every Garda strives to be.
He said the manner of Colm’s death “should not eclipse his life” and that he will “live on and he will be remembered in An Garda Siochana in the years ahead.”
Those who continue to serve will do so in honour of Colm Horkan’s legacy, he added.
While the nation grieves, it is important to remember Horkan belonged first and foremost to his family, Mr Harris said.

Members of An Garda Siochána at the state funeral of their colleague Detective Garda Colm Horkan in Charlestown yesterday.

Colm’s brother Brendan fought back tears as he paid tribute to a “kind, considerate, selfless and, above all, loyal” man. He described his late brother as a “giant”; he was the “rock of the family” and “pillar of the community… cut down in his prime.”
Colm was a man who wore the green and white jersey of his beloved Charlestown Sarsfields GAA club with “honour and excellence” and who carried himself with “dignity in and out of uniform.”
He said: “It is a sad day for the Horkan family and for the town and community of Charlestown, as we bury our brother before his time.”
Colm provided his family and friends with 49 years of laughter, jokes and a “disarming smile”, he said.
“He had so much to live for and got so much enjoyment out of life that today seems nonsensical… There must be a place for him at the top table up there because our loss is heaven’s gain,” Brendan added.
With the eyes of the nation watching, Charlestown, a town of a thousand residents, said farewell to their friend, their brother, their bear, their pillar and their giant.
Detective Garda Colm Horkan, giant, the top table awaits.

30 years on, the Maughan magic endures