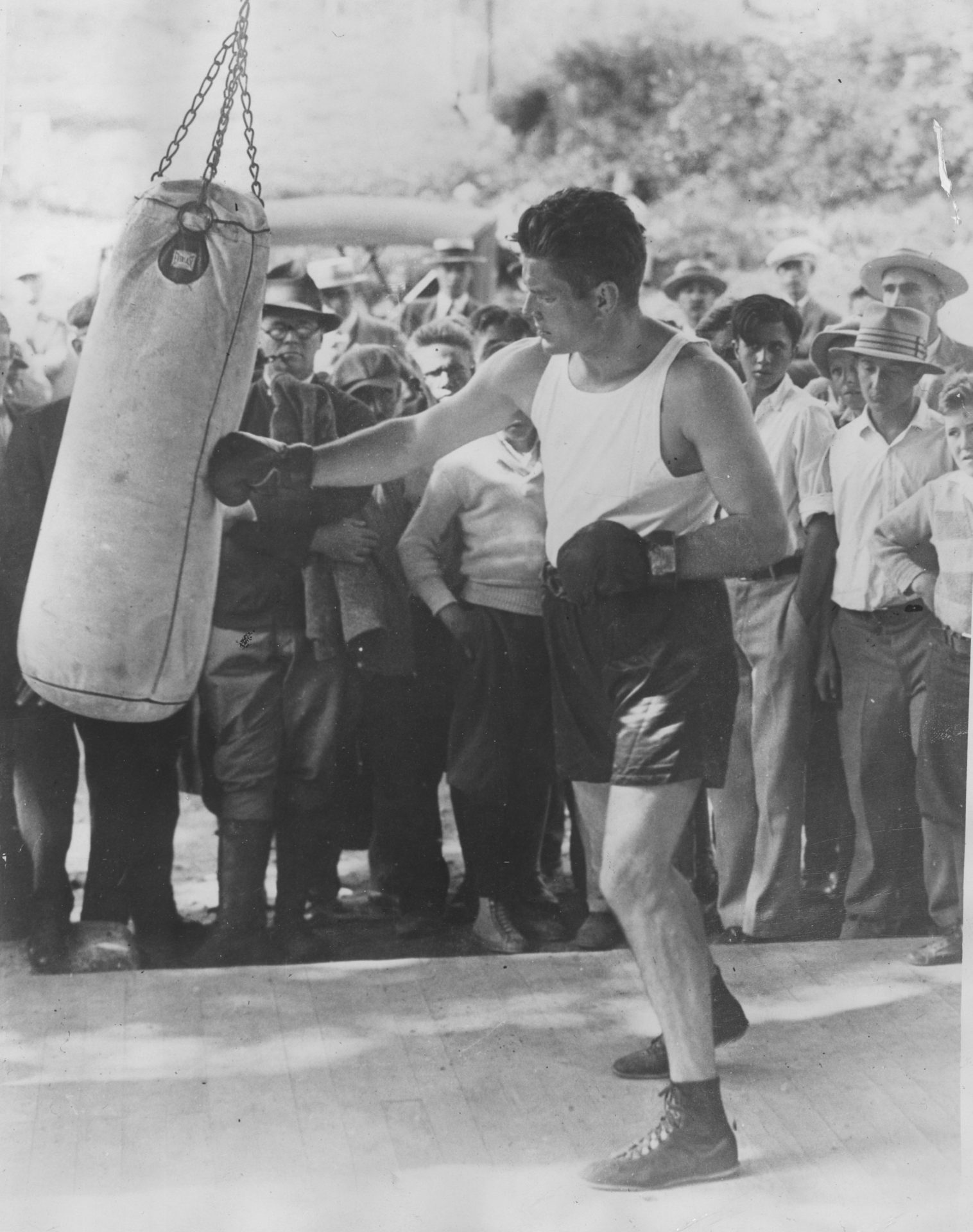 Gene Tunney in training at Speculator Camp, New York, for the Battle of the Giants, his forthcoming fight against Tom Heeney of New Zealand in July 1928. Picture: Getty Images

On September 22, 1927, a crowd estimated at between 105,000 and 110,000 gathered at Soldier Field in Chicago to watch one of the most anticipated rematches in the history of professional boxing, a bout that would become known in boxing lore as ‘The Long Count Fight.’

In one corner was Jack Dempsey, regarded as one of the all-time greats of the sport, who had reigned as heavyweight champion of the world from 1919 to 1926. In the other was the man to whom he had surrendered that title exactly one year earlier, a fighter whose parents had both emigrated from Kiltimagh to New York in the late-19th century.

J. Joseph Tunney, better known as Gene, was one of seven children born to John Tunney, from Cill Aodain, and Mary Lydon, from Gortgarve. John worked as a longshoreman in New York’s ports and Gene was born to humble beginnings in 1897. He learned to box in the streets and didn’t receive his first pair of gloves until the age of ten. He began to train at Greenwich Village Athletic Club as a teenager and had his first professional fight, a TKO win over Bobby Dawson, at the age of 18.

Upon the start of the First World War, Tunney enlisted with the US Marines. He was stationed in France during the war, where he won the American Expeditionary Force light heavyweight championship.

He continued his ascent of the boxing ranks after the war, eventually claiming the American light-heavyweight title in 1922 with a win over Barney ‘Battling’ Levinsky. His first defence of his title came a few months later, in a battle against Harry Greb in Madison Square Garden that has gone down in infamy for its sheer brutality.

Tunney sustained a broken nose and a deep laceration above the eye in the opening round but fought through the cascades of blood all the way to the final bell of the 15th round. The ringside doctors estimated that he lost two quarts (nearly two litres) of blood. It would be the one and only defeat of his professional career.

That was the first of five fights between Tunney and Greb in a three-year stretch; Tunney avenged the loss and regained his title in a second fight at the Garden in February 1923. He won again in December of that year, and though Greb boxed him to a draw in Brooklyn’s Olympic Arena the following October, Tunney put a definitive end to the rivalry in their fifth and final bout in Saint Paul, Minnesota in March 1925 with a victory that was almost as bloody as Greb’s had been in the first fight between the pair three years earlier. Greb died 18 months later from complications during a plastic surgery operation to repair his flattened nose.

Tunney by this stage had fought 80 professional fights, winning 75, and felt he was ready to pursue his ultimate goal; stepping up to heavyweight and taking the title from Dempsey. Their title fight was fixed for the Sesquicentennial Stadium in Philadelphia (Dempsey was prohibited from fighting in New York because of his earlier refusal to defend his title against an African-American fighter named Harry Wills) for September 23, 1926.

Tunney trained diligently for the fight, studying tape of Dempsey’s technique and bringing some of the champion’s former opponents into his camp for sparring practice. Tex Rickard, the preeminent boxing promoter of the day, marketed the fight aggressively and succeeded in drawing over 120,000 spectators through the gates.

In the first round, Tunney countered Dempsey with a vicious right to cheekbone which staggered the champion. Tunney dominated the remainder of the bout and took the world heavyweight championship on a points decision.

Dempsey demanded a rematch and the pair met for the second time 364 days later in Chicago. The rematch was the first live event in American history to generate over $2 million in gate receipts.

Neither fighter was able to gain the upper hand in the first six rounds, but in the seventh, Dempsey caught Tunney with a right cross to the temple and followed up with a volley of blows to the stunned champion’s head. Tunney went down against the ropes, the first knockdown of his 86-fight career.

The boxing authorities in Illinois had recently enacted a rule change which meant that the referee couldn’t begin his ten-count over a fallen fighter until his opponent had moved to a neutral corner. Dempsey’s camp had lobbied for the rule to be applied pre-fight, but in the heat of the moment, Dempsey forgot himself and did what he had always done; loomed over his opponent, ready to rush back in as soon as he regained his footing.

The referee, Dave Berry, ordered Dempsey to a corner, but by the time he got there, Tunney had already been on the canvas for approximately four seconds. Berry began his count and by the time he reached two, Tunney was already holding the rope and looking up at the ref, reading the count. He waited until nine before standing back up. In total, he had been down for at least 13 seconds. Had the fight been staged in New York, where the neutral corner rule didn’t apply, Dempsey would have won. 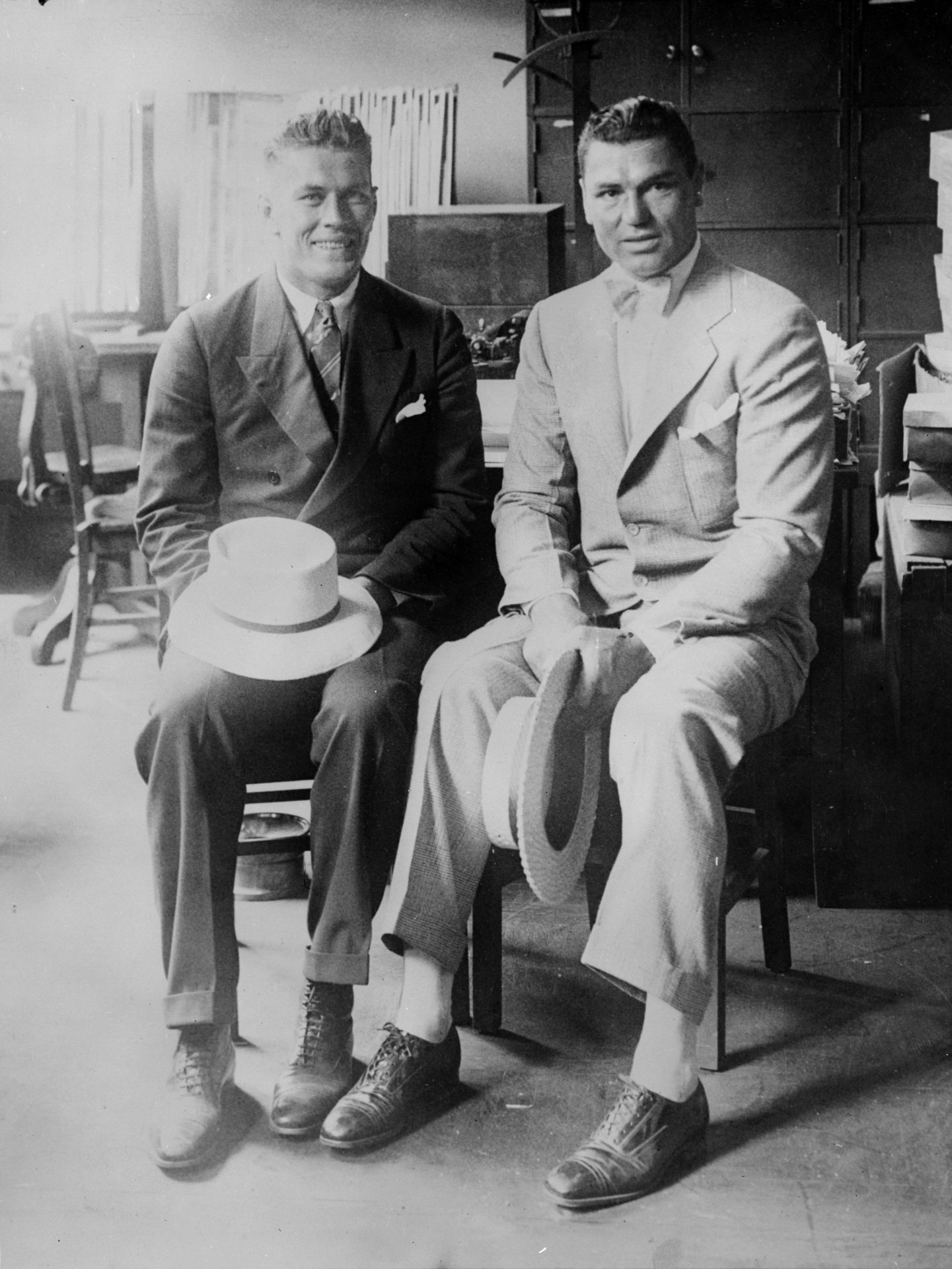 Instead, having taken full advantage of the rest time afforded him, Tunney quickly got back into the fight. He began to dictate the range and knocked Dempsey in the eighth. The decision went to Tunney, and after the fight, Dempsey, having fought what would prove to be his last-ever fight, raised the champion’s hand and told him: “You were best. You fought a smart fight, kid.”

The so-called ‘long count’, became a source of controversy after the fight. Some felt that Dempsey should have been awarded the win on account of Tunney staying down for more than ten seconds, but Tunney asserted that he was simply taking advantage of the circumstances. He said he could have gotten up any time after the count reached two, and Dempsey accepted his version. “I have no reason not to believe him,” he said. “Gene’s a great guy.” The pair would remain good friends for the rest of their lives.

By that stage in his life, Tunney was engaged to a wealthy socialite named Polly Lauder, an heiress to the United States Steel fortune and grand-niece of the famous industrialist Andrew Carnegie. They were married in 1928, with Tunney having promised his fiancé that his fight against New Zealander Tom Heeney in Yankee Stadium in July of that year would be his last. He won that bout via 11th-round knockout and kept his word, retiring as champion of the world with a professional record of 82-1-4 (1NC).

After retiring, Tunney moved to Stamford in California where he and Polly raised their four children. Their son, John Varick Tunney, would go on to become a Democratic US Senator for California from 1965 to 1977. Tunney went on to have a successful business career post-boxing.

Despite his reputation as a fearsome puncher, Tunney was famously intellectual, often passing time in his training camps by reading Shakespeare. He counted George Bernard Shaw and Ernest Hemingway among his friends and published a memoir in 1932 entitled A Man Must Fight, in which he reflected on his career and gave his thoughts on boxing techniques.

He also never lost touch with his roots in Kiltimagh. He was a first cousin of the late Brian Walsh of Gortgarve and Jim Gallagher of Walshtown and visited his parents’ hometown himself in the 1930s. His oldest son, Gene Jr, who now lives in Hawaii, performed the official opening of the Martin Sheridan Memorial in Bohola in the 1960s.

Gene Tunney, the heavyweight champion with Kiltimagh roots, died in November 1979 after suffering circulatory issues. He was 81.