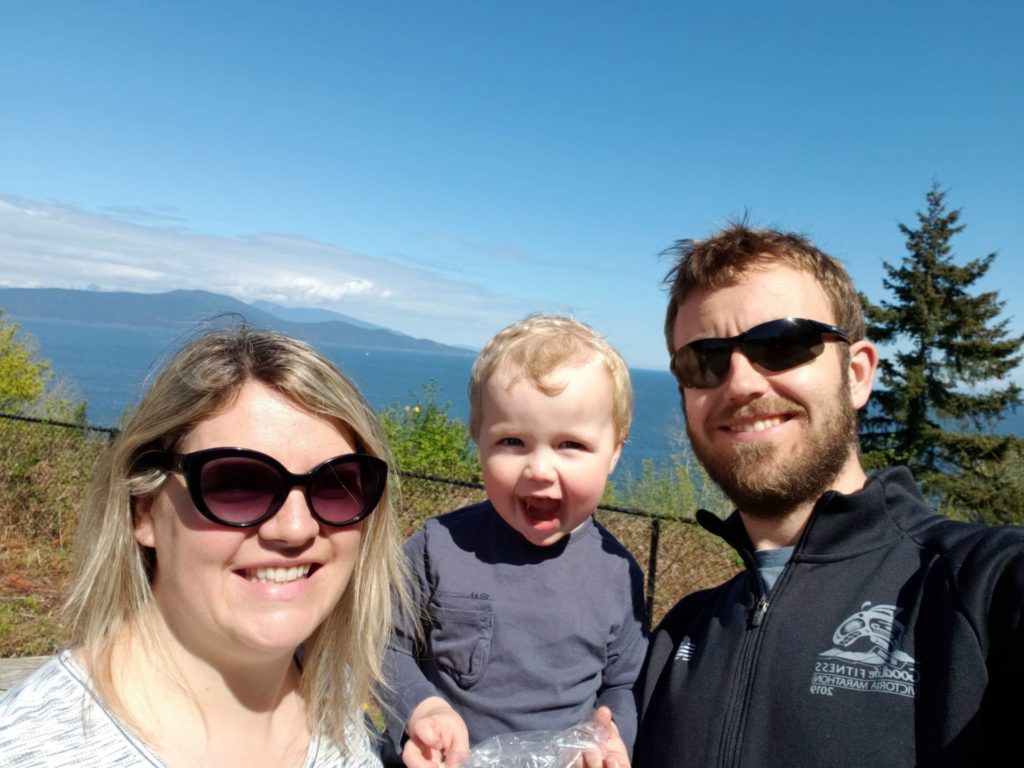 Deirdre, Fionn, and Sean O’Brien live in Vancouver, Canada. The family have been sharing their experiences of Covid-19 in British Columbia.

Castlebar man Sean O’Brien and his wife Deirdre, from Westport, live in western Canada with their three-year-old son Fionn.

The usually bustling metropolis of Vancouver has been a much quieter place in recent months.

“We live within two blocks of downtown and can vouch for the eerie stillness of the streets. The last two weeks of March was especially downbeat. Fionn has been able to freewheel his bike down typically thronged shopping districts like Robson Street. It’s the equivalent of having Grafton Street to yourself on a Saturday lunchtime. Shop windows were boarded up, with high-end chains going as far to clear all inventory from flagship stores (to limit break-ins). Over time, local artists reclaimed a sense of community by drawing uplifting murals,” said Sean.

The huge spike in cases seen in other major cities around the world never materialised in Vancouver and the British Columbia (BC) province.

“Although BC had its first known case in January, the surge hasn’t followed, and it has been tracking at roughly 10% of the cases in Ireland with a total of 2,600 by early June. There never was an official ‘lockdown’ policy enforced with a wide range of industries deemed ‘essential services’ throughout the crisis. This included daycare, take out food and delivery services, financial institutions, and a wide range of retail outlets. Each day has been bookended by the ‘7pm cheer for health care’, where Vancouverites make their way out on balconies and rooftops to bang pots and make vocal their appreciation for frontline workers,” said Sean.

Sean works as a Product Manager with Samsung Electronics while Deirdre is a therapist in a busy Vancouver hospital. The couple have been living in Canada for the past seven years.

“I had to transition from tech office life to work from home. There was a site-wide email sent on the Friday before St Patrick’s Day advising to go remote and we have not been back since. I occasionally worked from home previously, so it was a smooth transition from a technical standpoint at least. My wife is a therapist in Vancouver General Hospital, working with people who struggle with Mental Health challenges including suicidal ideation.

“Although her work practices have changed (to support virtual sessions with clients), she continues to work on the hospital campus as an essential service throughout the pandemic. Initially, some of the service was reduced to allow for her to be redeployed as needed and their physical space was repurposed for an overflow should the surge come. Staff were updated on PPE but these measures have not been needed to date,” said Sean.

Daycare has stayed open in Vancouver and Sean and Deirdre’s little boy has learned to ride a peddle bike faster than expected.

“Our daycare for Fionn has remained open. At the start we were expecting the province to shut them down (just like Ontario had done). Instead, it was largely left up to providers and parents to make the call. This minimised the disruption for Fionn. From his perspective, the big question has been why everything is closed all the time. The upshot has been he learned to ride a peddle bike unaided with all the spare time!” said Sean.

The family has tried to navigate the difficulties that Covid-19 has thrown up and are taking advantage of the wide-open spaces that Vancouver is known for. “I have never spent so much time in our apartment. Jobs that were on the perpetual long finger have finally been tackled. We also managed to spend a lot of time outside as a family. The city parks stayed open throughout the crisis, including the nearby Stanley Park – this has been the best release valve by far. We are lucky to have such large, open spaces within walking distance and offering plenty of distraction for a busy three-year-old,” said Sean.

British Colombia is entering the second-last phase of kickstarting the region. “We are currently transitioning to phase 3 (of 4) of the BC Restart plan. This means hotels and resorts can open, along with schools, overnight camping in provincial parks and selected entertainment events. The pubs and restaurants have already reopened. Capacity has been capped at 50%. Phase 4 is dependent on vaccination or some equivalent broad successful set of treatments. Time will tell, but for now it means no large gatherings, live audience events or international tourism for the foreseeable future.” said Sean.

“From an economic standpoint, it looks like 2020 will be a write-off. Vancouver generates a lot of activity from tourism. Cruise ships have been a big part of that. Its season was effectively cancelled. The US border also remains shut. There are some positives, with the film industry almost back. We are lucky to have such a large and beautiful place to be isolated in,” he added. 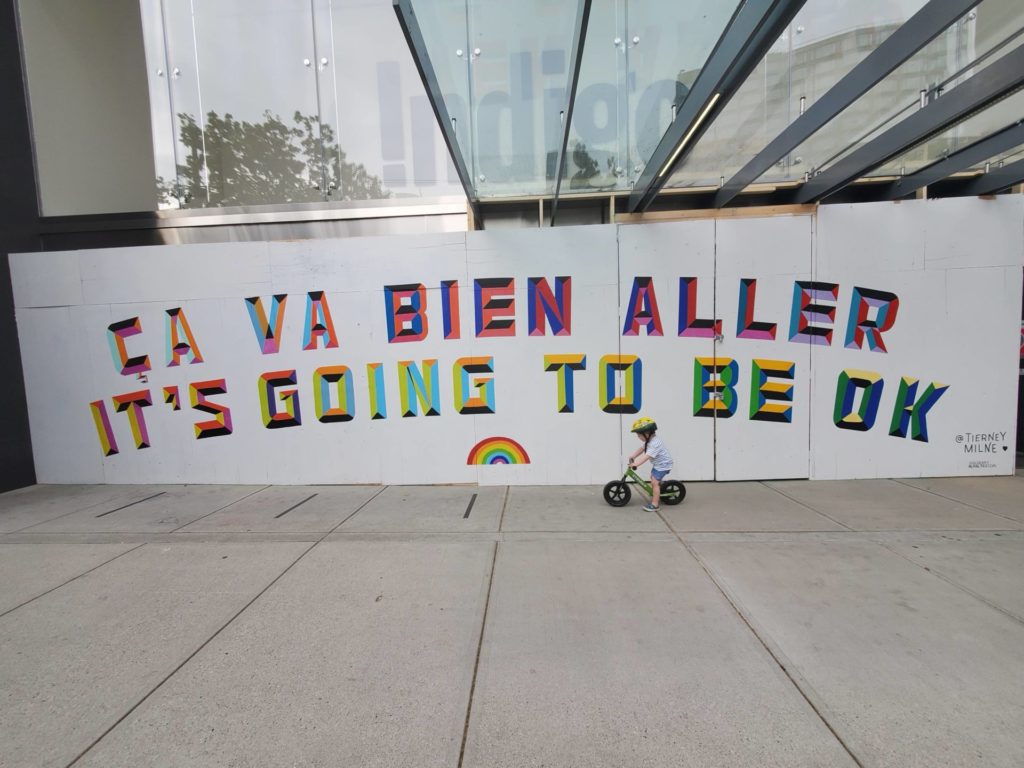 Fionn O’Brien cycling his trike past an uplifting mural on Robson Street in Vancouver.

Vancouver has managed to largely shield itself from the worst effects of the coronavirus.

“Vancouver has escaped the worst impact with a small fraction of the cases that are present in Ontario and Quebec. A lot of the credit has been directed to the Provincial Public Health Officer, Dr Bonnie Henry. “Be kind, be calm and be safe” has become a new catchphrase, one that she delivers during daily press briefings. She has also been to the forefront to encourage people of all ages to spend time outdoors.”

Canada learned lessons from the SARS outbreak that struck the country between 2002 and 2004 and the country was ready to respond to the Covid-19 outbreak.

“Canada’s previous experience with a SARS outbreak in the early 2000s seemed to have left a legacy of preparedness for pandemics. Deirdre experienced this firsthand when there was an Ebola scare a few years ago in the hospital she worked at. Wards were quickly isolated/dedicated to identified patients.”

Sean believes the BC approach has made re-opening easier compared to the tact taken in Ireland.

“The primary practical difference in approach was not enforcing a wide industry/service shutdown and avoiding blanket travel limits which has meant the opening up here does not require as much central planning as I see happening in Ireland.”

Sean said the tight-knit Irish community in Vancouver has rallied.

“Irish Community groups on social media are active such as the Irish Families, GAA, Darkness into Light. Also, the Irish Consulate is based in Vancouver and this has given more of a formal feel to support since its arrival. The Irish Immigration Service has been connecting to offer support for mental health and running exercise classes daily. As with anything it can take courage for people to reach out for support but, in general, people have always been supportive of each other even pre-pandemic.”

Being away from family and friends has been difficult but the O’Briens have embraced online communication to bridge the gap.

“In some ways it has been the great leveller as physical location has been irrelevant since March! Our families are geographically spread across Ireland meaning they have not been able to visit each other either. We have tried group video calls pre-pandemic but never with such regularity and meaning as the past three months. It is a bit unsettling knowing that international travel is so restricted now.

“The distance between Vancouver and Mayo sinks in that bit more.”