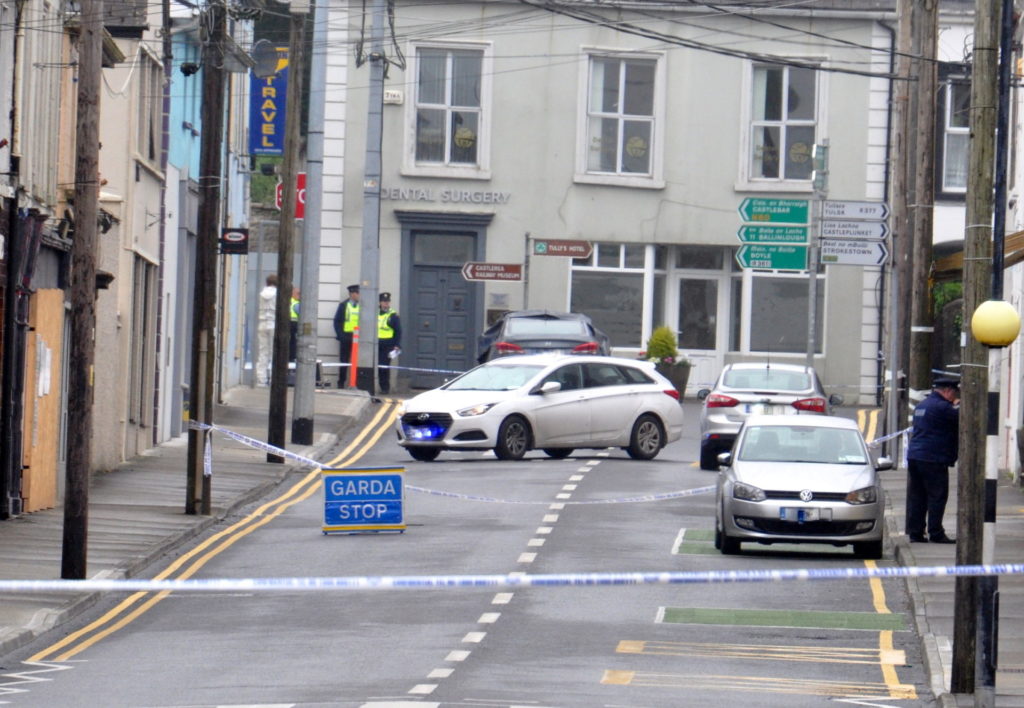 The streets of Castlerea town remain sealed off today as Garda scene-of-crime examiners continue their investigation into the death of Detective Garda Colm Horkan on the Main Street on Wednesday night.
It is understood that Gardai spent much of Thursday extracting spent rounds from surrounding walls and buildings following the shooting. According to sources the suspect, currently being detained at Castlerea Garda Station, fired a handgun wildly after seizing it from the 49-year-old detective.
The suspect, a man in his 40s, believed to be from the local area, was tackled and arrested at the scene by two Gardaí who had come to Garda Horkan’s assistance.
Garda Commission Drew Harris said in Castlerea on Thursday afternoon that the shooting served “no purpose”, was an “aberration” in Irish policing and was a “random act”.
It is reported that the suspect has a history of mental health issues and drug and alcohol abuse. He had been questioned by Gardai the previous day. Garda Horkan encountered him on Wednesday night while he has on mobile patrol in the town. It is believed that he was operating a motorcycle and acting erratically.
While what happened next is still under active investigation, it is understood the Garda got out of his car and engaged the man in conversation before a struggle broke out. It is believed the Garda did not draw his weapon and that the man may have wrestled it from its holster before firing it. The weapon holds 15 rounds, all of which were fired in short succession.
Det Garda Horkan, a native of Charlestown in Co Mayo, had been appointed to plain-clothes duty a few weeks previously, having spent most of his 24-year career in uniform.
He is the 89th Garda to be killed in the line of duty since the foundation of An Garda Siochana almost 100 years ago.