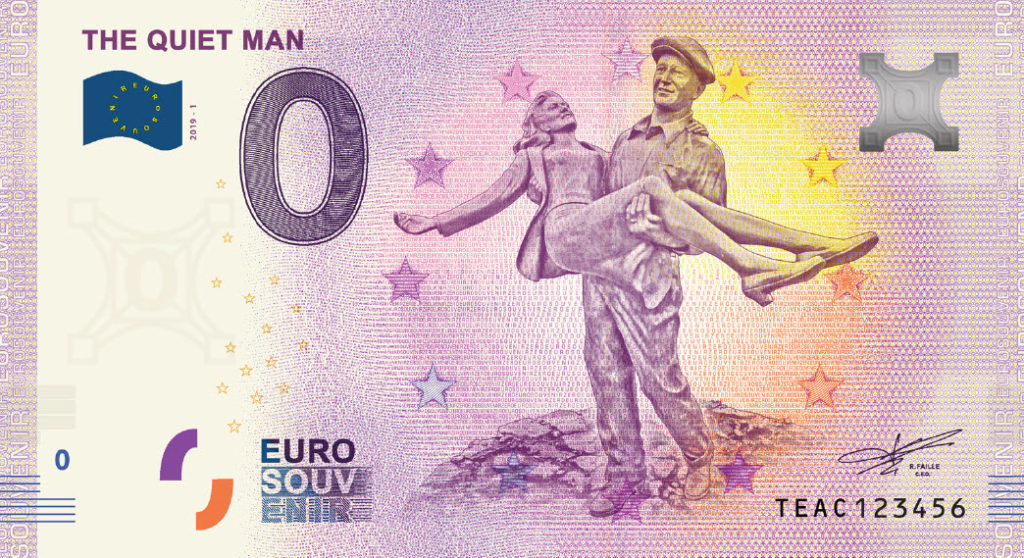 A souvenir bank-note commemorating The Quiet Man and bearing the image of John Wayne scooping up Maureen O’Hara.

It’s been almost 70 years since it was first released into cinemas but the John Wayne classic The Quiet Man continues to captivate audiences today. The 1952 film, directed by John Ford, was filmed in Cong in South Mayo and went on to win two Oscars.

The Quiet Man has now been immortalised as part of a special-edition zero-euro banknote. The souvenir banknote is licensed by the European Central Bank and printed by Oberthur, the French facility that prints the official euro.

The Quiet Man note has the look and feel of a real banknote along with a watermark, holographic protection and UV-responsive tactile marks. The front bears the iconic image of John Wayne scooping up Maureen O’Hara.

Only 5,000 copies of the note will be produced and it is sure to become a collector’s item to John Wayne fans, as well as those passionate about Irish culture.

“The Quiet Man gave people all over the world the chance to fall in love with Ireland,” says Euro Note Souvenir Managing Director Peter Schneider.

“We believe creating a note that immortalises that moment will delight collectors and movie buffs all over the world. With travel restricted due to the coronavirus, fans of the film won’t get to come visit in person right away, so we hope this note can be the next best thing.”

Fans hoping to get their hands on the note will need to move fast, with quantities of limited to 5,000. It is available in the company’s online shop.

Newest Mayo priest gets post as diocese rings the changes