The night Lou Grant made remote working my reality 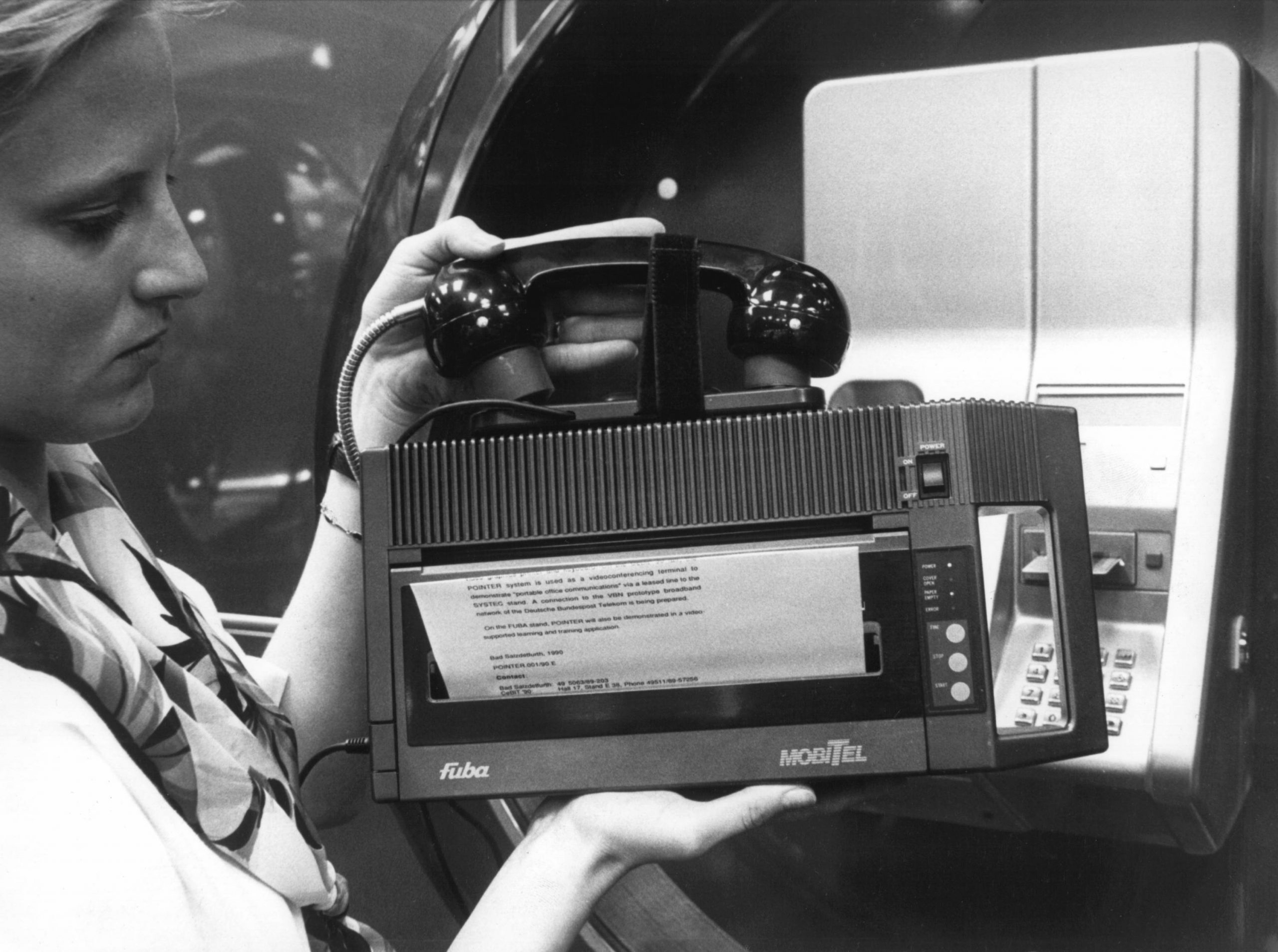 A portable fax machine weighing 3 kilos on display at the CeBit technology fair in Hanover, central Germany. A small Sligo company became one of the country’s first purchasers of a fax machine in 1982 and it had a transformational impact. Picture: Getty Images

Remote working is the order of the present day and likely to proliferate following the Covid-19 lockdown as communications become more advanced and powerful. It was a different story in the early 1980s, not alone in a northwest corner of Ireland but throughout the world. Matters had progressed recently from the humble telephone with the advent of ‘Telex’ which, provided communication lines were in place, messages typed anywhere on an appropriate typing machine would immediately reproduce on a similar typing machine in any other location.

My partner Oliver and myself had recently moved to a purpose-built office in Finisklin, Sligo to pursue our business of design service to the precision tool-making industry which was concentrated in the Sligo area. We had both trained as precision tool-making designers in Tubbercurry where many claim Smart Economics in the form of precision tool-making were first introduced into this country. Our main business was designing moulds to produce plastic parts which were increasingly used in products of all sorts. In many instances we worked with the mould-makers’ customers to ensure best product performance and most efficient production – and so it was we came into contact with a subsidiary of a German company that manufactured wing and internal mirrors for automobiles. The German company has to design the mirror in many, many parts from block models supplied by the automobile manufacturers incorporating all of appearance, performance, safety, durability and at a cost acceptable to the final users; car manufacturers in Europe.

Following several visits by German engineers and participation in product design, the German parent company expressed an interest in our ongoing involvement in the design process of future mirror projects. This was to us a very attractive proposition but since our office was so far removed from the German office, there was an enormous problem of immediate communications. No matter how well-phrased or descriptive the images transmitted by spoken or written word, they were no substitute for the graphic images needed to facilitate cooperative design. After several unsatisfactory attempts we were on the verge of abandoning the whole exercise as impractical when, purely by chance, I became aware of a device which might make the whole process possible and effective.

At that time, we in Ireland watched many US shows on television. One that I occasionally watched concerned the travails and triumphs of a local newspaper. The show was called Lou Grant, the editor, who amongst his staff had a photographer, descriptively referred to as ‘Animal’, who traversed the countryside taking photographs which might grace and illuminate stories in the struggling newspaper. On one particular night, as I absent-mindedly watched the programme, preoccupied with fears of losing the German design opportunity, Animal, in his boarding house room, processed, on a portable development kit, some films taken during the day. Animal then took one photograph recently developed and placed it in another machine he had taken from his hoard of gadgetry. He closed a cover on the photograph then dialled his office number on the room telephone and when contact was made, placed the hand-piece, speaker and receiver down on a cradle which was part of the strange device cover. Pressing a button started a digital scan, then the TV picture quickly moving to the newspaper office where, without anyone in attendance, the picture was seen to emerge from a similar machine.

My absent-mindedness was immediately replaced by a mixture of incredulity and hope; was what I had seen fact or science fiction? I spent a somewhat restless night, anxious to find out if what I saw was a practical solution to our problem, or some television soap producer’s venture into fantasy.

My first contact with our usual office equipment supplier was not entirely hopeful. They had never heard of such a machine but promised to enquire from their international suppliers. I made contact with our prospective German collaborators who expressed ignorance of such a machine but promised to immediately investigate whether such a device existed and the practicability of using it to conduct remote design of somewhat complex products. A reply from our local supplier confirmed that such a device existed but that it was expensive and as yet, to their knowledge, none had been installed in Ireland. 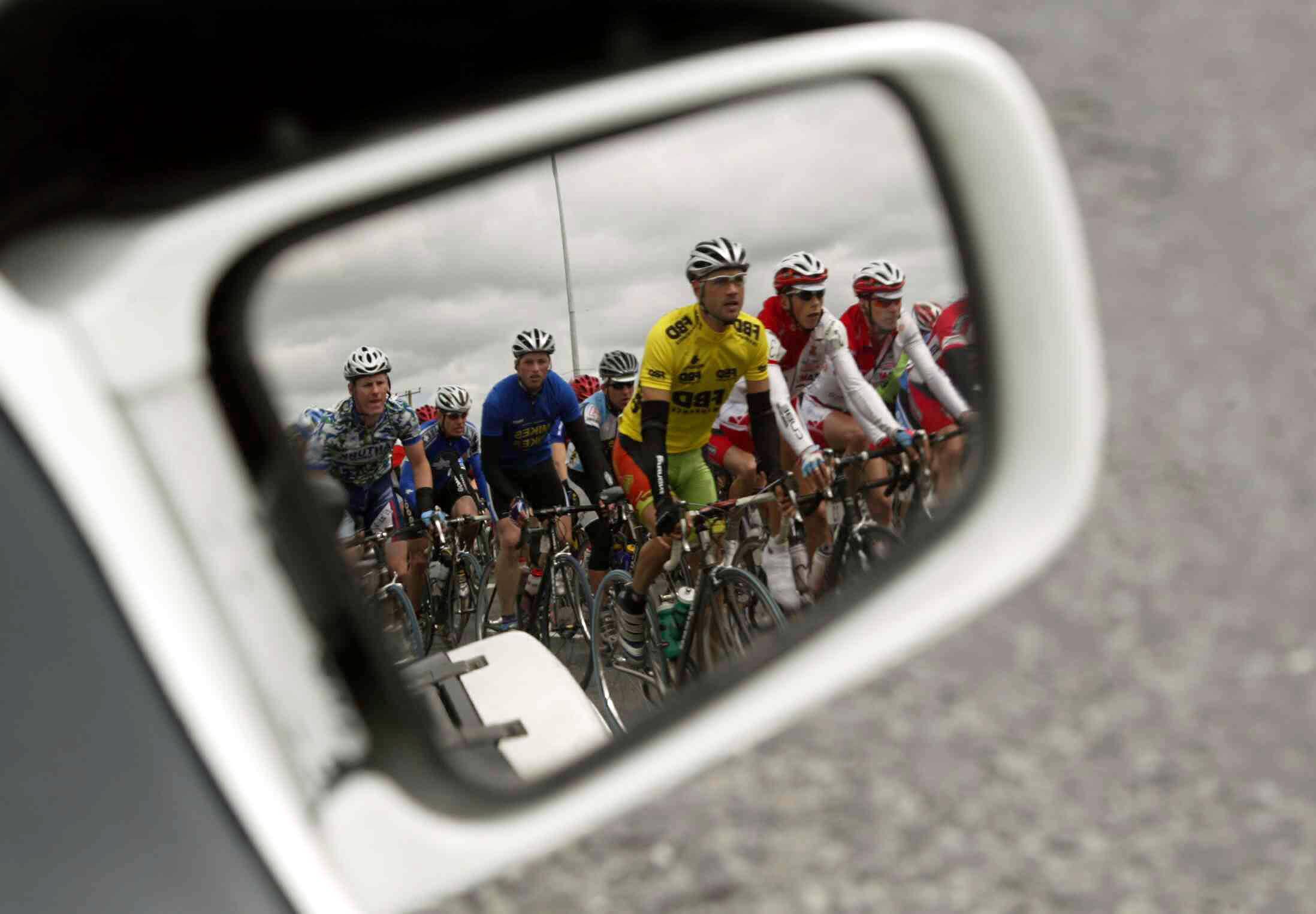 Cyclists on their way from Tubbercurry to Lisdoonvarna during the 2005 FBD Insurance Rás. Padraic Neary’s firm became involved in the design of wing and internal mirrors for the German car industry. Picture: INPHO/Lorraine O’Sullivan

I recently met with the sales manager of the office equipment agency of the time and we recalled, as we usually do, of the fax. Mentioning price, we wondered if our memories were playing tricks when a figure of about £7,500 came to both our minds. To satisfy my curiosity, I searched the internet for what price a fax machine was back then, and was reassured my memory was correct when told that in the USA, one would have set you back about $20,000 in 1982.

Some days later, after several enquiries, our German contacts confirmed they had found such machines were being introduced into Germany and expressed their willingness to invest and conduct a trial on the feasibility of graphic communication in such a way. £7,500, almost 30% the price of a house, was an enormous expenditure for our small company, and assuming we could get a loan for what at the time appeared a hair-brained idea, interest rates ranged as high as 18%. With much trepidation I expressed regret that we could not afford such an investment but after some days of consideration and teasing their budget flexibility, our engineering collaborators tentatively informed us they were willing to finance both machines on the understanding that if the venture failed, they could take our machine away to use in some of their other locations.

And so it was we placed an order for one of the first fax machines in Ireland. When, after six weeks the machine arrived, we were told since no local telecommunications engineer had the necessary training or experience, we would have to wait until one came from Dublin to effect the connection. As the German machine was already connected, when we eventually got ‘on-line’, a very alien expression at the time, we were able to make immediate tests which proved entirely adequate for collaboration on design with the German mirror manufacturer. Using the conventional phone to discuss issues and the fax to illustrate designs, we continued to work ‘remotely’ and very successfully until real on-line internet superseded the humble, but so very useful in its time, fax machine.

Within two years of investing in fax, the cost of the machines halved. They halved again over the next few years and continued to reduce until costs were in the low hundreds. Simultaneously, the machines got progressively better incorporating photocopying, printing and scanning facilities. The original machines required special photo-sensitive paper to receive messages and stand-by-the-machine attention to send all messages. Advancements soon made normal printing paper entirely adequate and multi-sheet pre-programmable facilities facilitated millions of sheets of information to transverse the world at all hours of day and night. So it is with progress; the fax machine, certainly the type we originally purchased, is now a museum piece with few if any in use any more. But in 1982 it was a miracle of communication that made remote working possible – even from a small office in Sligo.