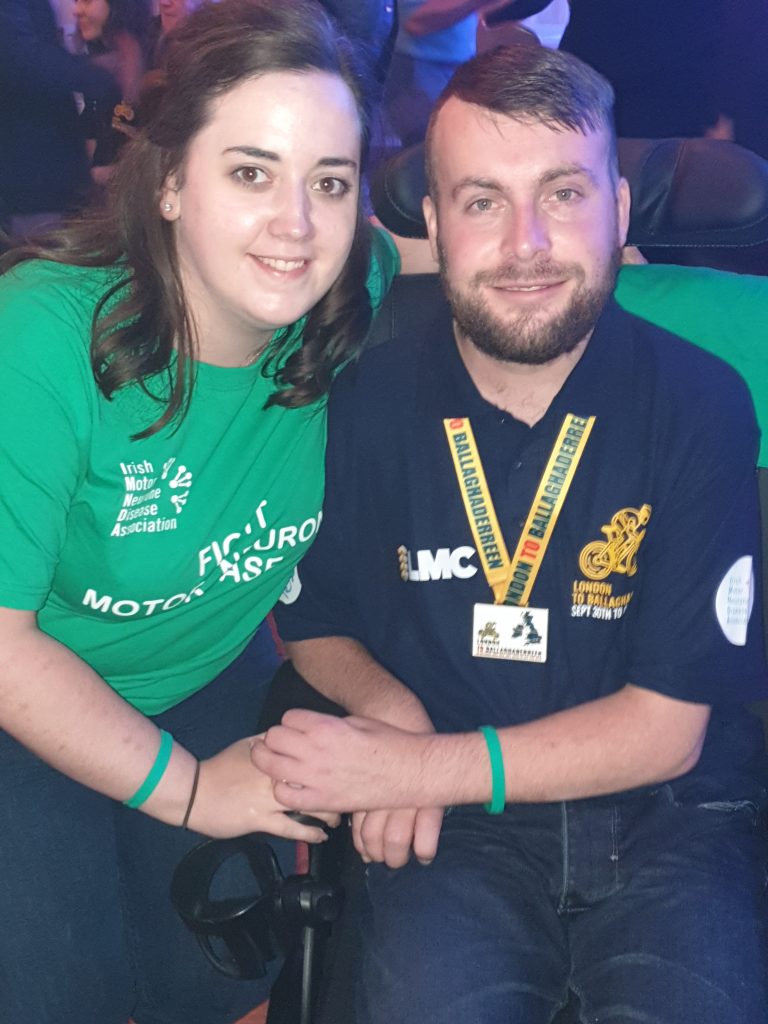 Jason and Rachel are expecting their first child in August, exactly two years after Jason was diagnosed as having Motor Neuron Disease.

Friday, August 17, 2018 is a date etched into the memory of Jason Corrigan. Prior to that day, the Carracastle native was your typical 26-year-old, working shifts at Harmac Medical in Castlerea and haring up and down the right wing for Ballaghaderreen FC at the weekends. He had just returned from a trip to Tenerife with his partner Rachel and, with another week of holidays to spend, decided to see about a weakness in the right side of his body that had been getting progressively worse over a period of 18 months. He made an appointment at the hospital in Galway.

“I don’t worry or stress much,” said Jason this week. “I went up thinking they were going to tell me I had something small and I could go back to work. They did a lot of tests and then I was diagnosed with Motor Neuron Disease.”

MND is a progressive neurological condition that attacks the nerves in the brain and spinal cord, gradually diminishing the brain’s ability to communicate with the muscles. For Jason, the symptoms had come on slowly over time, and it was only when workmates began to ask him what was wrong that he decided to get checked out.

“At first it was my right leg that was very lame, getting very weak,” he recalls. “I was still driving, still working. But then the right arm started getting weak too. My friends at work would be asking me what was wrong with my leg; I told them it was from football, that my ankle is dodgy. But it showed my attitude. I was still going along with life, I didn’t think it was anything serious.”

Unfortunately, the tests proved otherwise. It took time for the diagnosis to fully register with Jason, and at first he resolved to carry on life as normal.

“I didn’t know much about it. It took a while to process. I didn’t know what to do. I wanted to keep working, keep doing what I can, but my body was telling me different,” he said.

Jason lived at home with his parents for the first few months after his diagnoses but last year he moved to the Oakwood Nursing Home in Ballaghaderreen to gain some more independence for himself. He and his partner Rachel Harraghy are expecting their first child in August and they hope to move into a home of their own, but Jason said finding a place matching his accessibility needs has been difficult so far.

“I’m not going to let this disease stop me from doing that. I want to be given the opportunity to live as a normal person,” he said.

“It is proving difficult at the moment to find a house that’s wheelchair-accessible. There’s very little available around here, in the Ballaghaderreen, Swinford, Charlestown area. For people like me or elderly people who need bungalows to suit their needs, there doesn’t seem to be much consideration for people like that. We need wheelchair-accessible houses; we want to be able to live like a normal family.”

Jason is unfailingly positive despite his condition and adamant that he will live his life to the fullest. The Covid-19 pandemic has only served to remind him of what he has, rather than what he has lost.

“Now with Covid-19, I’m thinking to myself, ‘God, I’m lucky.’ There are people dying out there left, right and centre. I know I’ve got a terminal disease, but nobody knows what’s coming,” he said.

“There’s no point in me dwelling on things, lying in bed all day. You will have those days when all you want to do is stay in bed and talk to no-one, but that’s not the right attitude. It is hard, but you’ve still got to live, you’ve still got to get on with life as best you can. It’s not just for me; it’s for my family, my partner, my parents, people who have helped with donations. There have been so many fundraisers for me. You have to give back and smile, do your best, keep fighting. That’s what I’m doing.”

Jason has received strong support from the communities of Carracastle, Ballaghaderreen and Charlestown. A GoFundMe page set up by his sister Eilís shortly after his diagnosis raised over €17,000 to go towards his long-term care, and the money for his wheelchair came via the London to Ballaghaderreen Cycle organised by a group from the border town last summer.

“At the start I was telling them that I didn’t want to be in the wheelchair,” said Jason. “I just felt it wasn’t for me. But now I’m in the wheelchair and I’d be lost without it. It’s another way of getting around. It’s like a bike or anything else. I’m still the same person sitting in the chair. 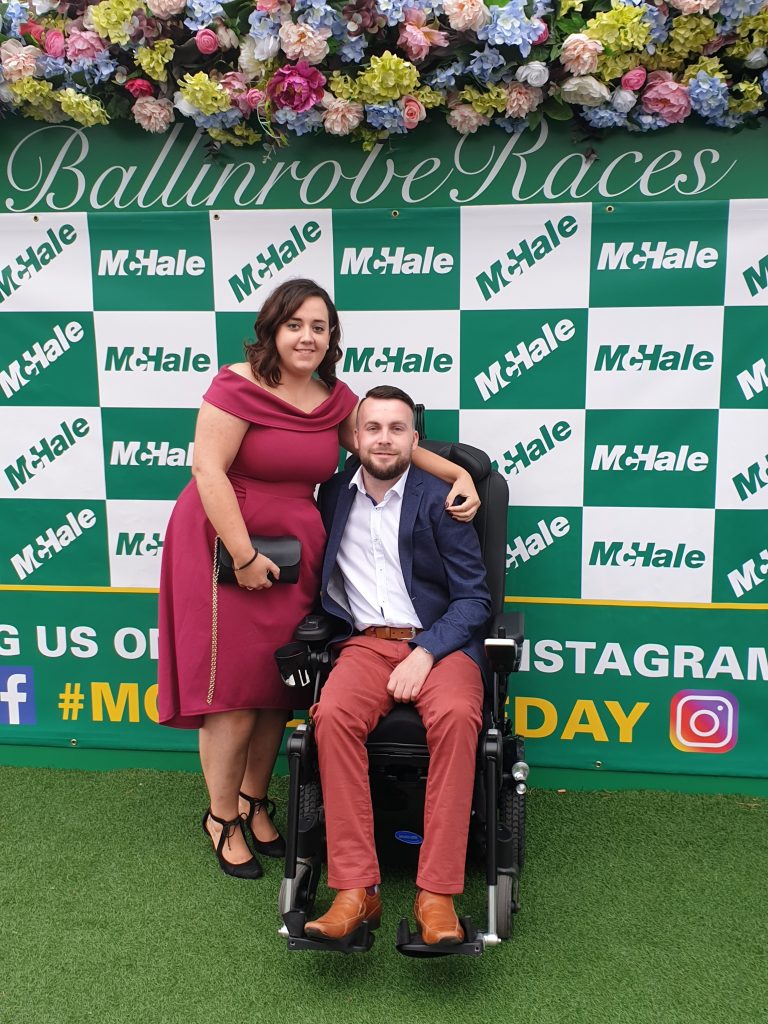 Jason and Rachel enjoying a day at the Ballinrobe Races.

“I was conscious of people looking at me, thinking ‘oh there’s the poor lad in the wheelchair, he looks so young.’ I don’t want any of that. I don’t want pity, I don’t want people that have known me for years to be afraid to talk to me or to treat me any differently. I’m still the same person.”

The prospect of becoming a father is also driving Jason on to remain positive.

“It’s something that I’ve always dreamt of,” he said. “No matter what disease I could have, I wasn’t going to let it win. There’s MND, there’s cancer, there’s Covid-19 now. You can’t take life for granted.

“So getting the news that I’m going to be a dad was a big lift. It gave me an extra push to keep doing what I’m doing, to stay positive, keep the body moving. I will do everything I can to be the best dad I can be.”

The lockdown has meant Jason has been unable to have visits from his family, his partner or his friends in the last few months, and while he acknowledges that it has been difficult, he insists that there are families who have had things far, far worse than he.

“With Covid, there are families out there who can’t attend funerals. So I’m lucky – I’m not going to be whinging that I can’t see my family or my girlfriend. I just have to keep myself positive. I have so much to look forward to. I’m going to be a dad – that’s given me the biggest lift. I have to keep that in mind, that’s very important for me,” he said.

“I never say: ‘oh I wish I had done this or that before I was diagnosed’. I’m positive that I’m going to be here for a long time. I’m not going to be lying in bed dwelling on when the time will come. If I thought like that it would just drain me. My body wouldn’t be able for that. If I keep doing what I’m doing I don’t see why I won’t be here in two, three, four years’ time.”