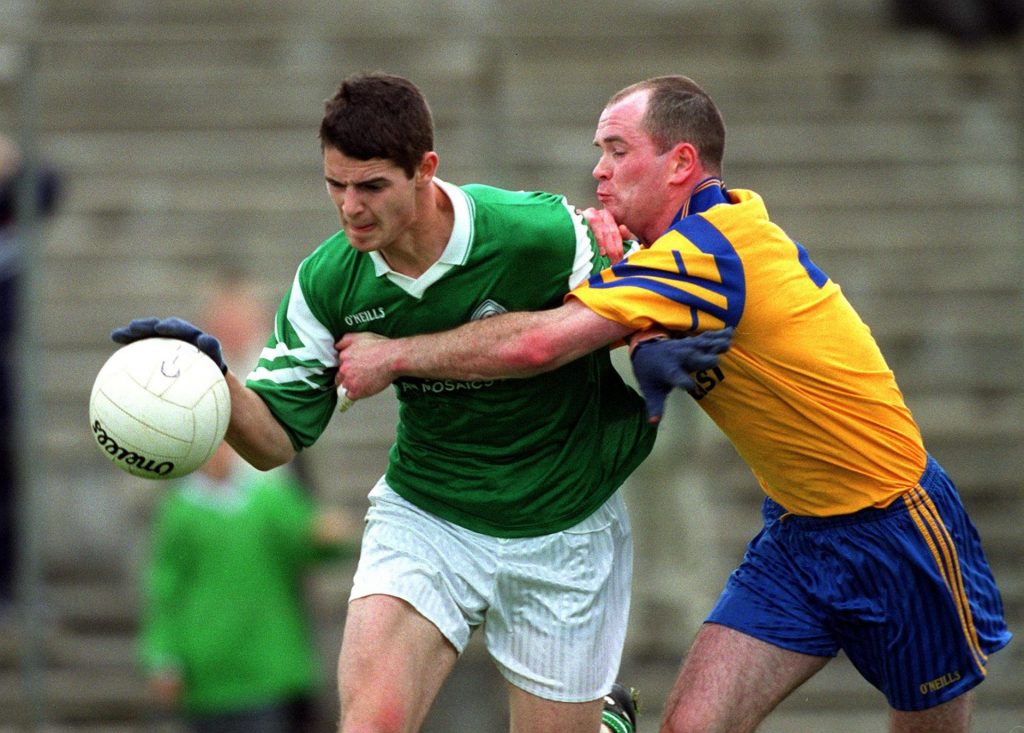 Ray Gaughan (right) in action for Knockmore against Charlestown in the 2001 Mayo SFC Final.

A fundraising campaign has been launched for a Knockmore man who has suffered serious injures in a work-related accident in London.
Ray Gaughan fell from a ladder on May 14 and incurred life altering damage to his left leg.
Originally from Rathbane, Ray would be particularly well known from his years spent wearing the colours of Conn Rangers FC and the Knockmore senior football team, with whom he appeared in the 2001 Mayo SFC Final. He was part of the famous Rangers team that won the 1992 Connacht U18 Cup.
A painter and decorator, Ray had only recently moved to London for work before his accident. Friends say he has received excellent care but that doctors have advised him he is facing into a very long road of rehab and the likelihood is he will have significantly reduced mobility.
Having to remain in London for the foreseeable future, there are certain to be substantial costs in the coming months, both for treatment to Ray’s injuries and for significant alterations that will need to be made to his home. It’s with that, and the major long-term implications for his work, in mind, that a group of his friends have launched a GoFundMe campaign.
“We appreciate that a lot of people are under pressure just at the moment but Ray is one of our own who has found himself in a very difficult situation and any and all support would be  greatly appreciated,” said a group spokesperson. “With three young children it’s a very worrying time for Ray and his family so if you are in a position to help out, please donate and keep them in your prayers.”

The fundraising began on Monday and has already passed the halfway point of a €10,000 target.

You can donate at www.gofundme.com/f/rangers-for-ray