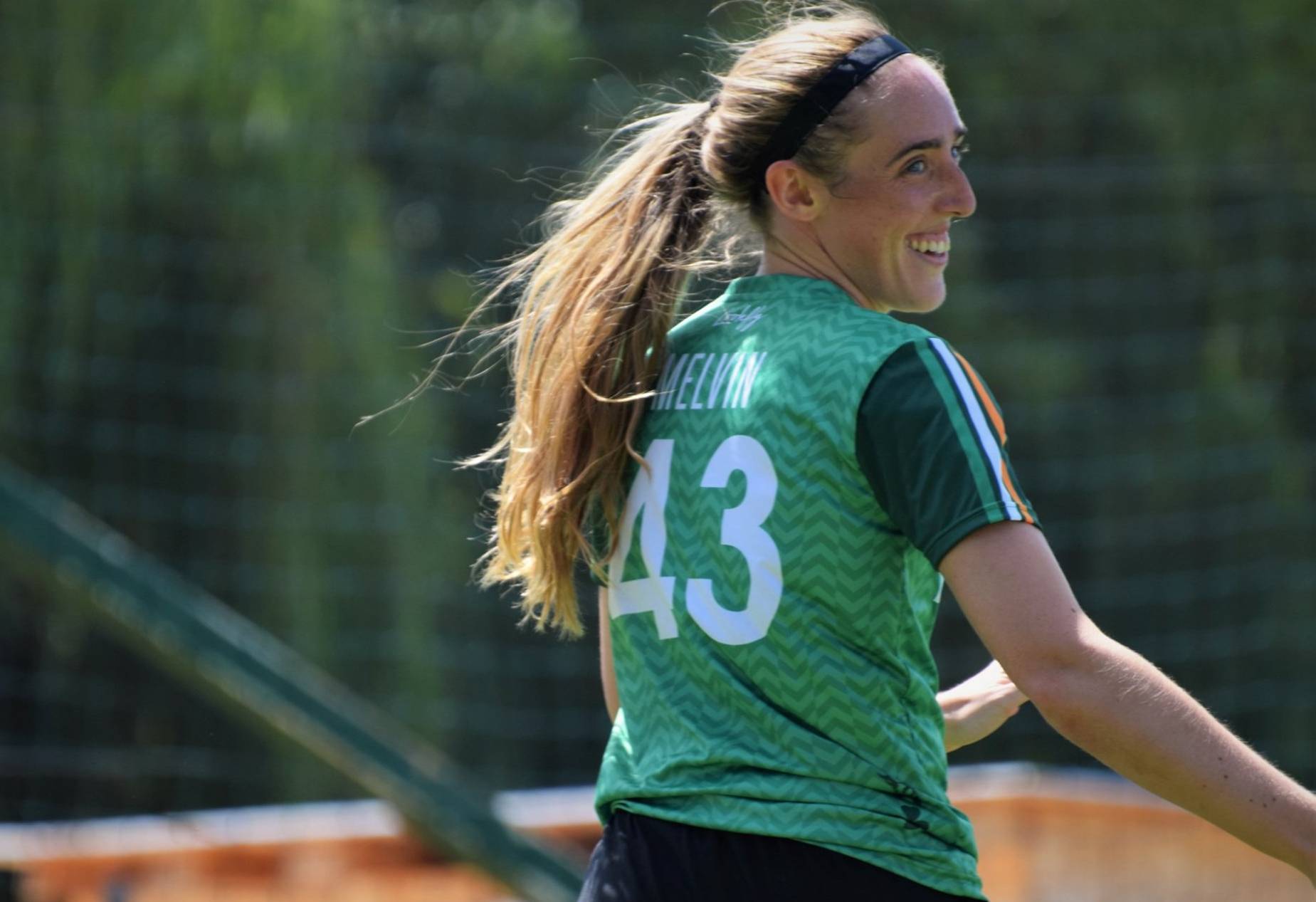 Were you aware that there is an athlete from Crossmolina who, in the span of the last 12 months, has a) captained Ireland to a European championship title, b) been named European Player of the Year in her chosen sport, and c) been selected on a European All-Star team to tour the US and take on the elite American stars of the sport, beating them in six games out of seven?

If you weren’t, it’s time you learned about Sarah Melvin.

Ultimate frisbee is something of a niche sport in Ireland. Its rules resemble those of American football, with the crucial distinction of the game being played with a frisbee instead of a ball. It has traditionally been strongest in Irish colleges and universities but in recent years the club scene has begun to grow, with playing numbers increasing across the country, while the sport has also taken root in a number of secondary schools.

Sarah, like most players, discovered the sport in university. She was studying modern languages at the University of Limerick and living with housemates who were into ultimate frisbee. After some convincing, Sarah went along for a look.

“I had absolutely zero interest in even finding out what this thing was,” said the 28-year-old this week from her home in Crossmolina. “I was so involved in my other sports, and I didn’t even fully believe it was a sport for a long time.”

Basketball was the primary other sport; Sarah was playing varsity with UL at the time and reached the Women’s Senior National Cup Final with the college in 2011. It wasn’t a case of love at first sight with the frisbee, but she persisted for the physical and social benefits.

“I didn’t really enjoy it all that much in the beginning. The disc-skills were much more difficult than I expected them to be. I just wasn’t a natural,” said she.

“But I enjoyed the running side of things so I kept going along and eventually they convinced me to go to a tournament. Once I went to a tournament, I was hooked. I came back, quit basketball and stuck with frisbee from there on.”

It seemed like a drastic move to make, but Sarah was looking at the long term.

Basketball Ireland at the time were in the midst of their bankruptcy issues; there was almost no money in the sport, no international teamscompeting and very few opportunities to travel. Ultimate frisbee, in contrast, had an international outlook, with tournaments being held all around Europe.

“It was fast, it was outdoors, and it had loads of opportunities,” says Sarah. “It combined lots of skills from different sports that I was good at. The field is quite big, it’s almost like a soccer pitch, but it has the speed and the cutting techniques of basketball. It had everything really.”

She was fully on board and things began to happen. In 2013, after some more convincing from her friends, Sarah took a chance and signed her name up for the Irish under-23 team. She had been playing less than a year for the university and was still without a club, but the coaches took a shot on her.

“I couldn’t believe it really,” she said. “I was told later that it was just for my athleticism, not my frisbee skills!

“But that’s one of the benefits of being in an up-and-coming sport, they were willing to give me a chance. From then on I got into the club scene a lot more, I started travelling up to Dublin and didn’t look back after that.”

She is now a member of the Ringsend-based Dublin Gravity, the All-Ireland Women’s champions of 2017 and 2018. In normal, non-Covid times, she would be on the road most weekends, either attending one of the Irish national team’s monthly training camps or competing for the Gravity at tournaments around Ireland and other parts of Europe.

The pandemic has shut down ultimate frisbee for the time being, which is a pity for Sarah, as she was coming into the season off the back of an incredibly successful 2019. Firstly, she was named captain of the Irish women’s team to compete in the European Championships in Gyor,Hungary last July. Ireland took on Finland (the reigning European champions), Russia (the pre-tournament favourites) and Switzerland (runners-up in the last championships in 2015) in the quarters, semis and finals. They beat them all to take the continental crown, with Sarah leading the way. 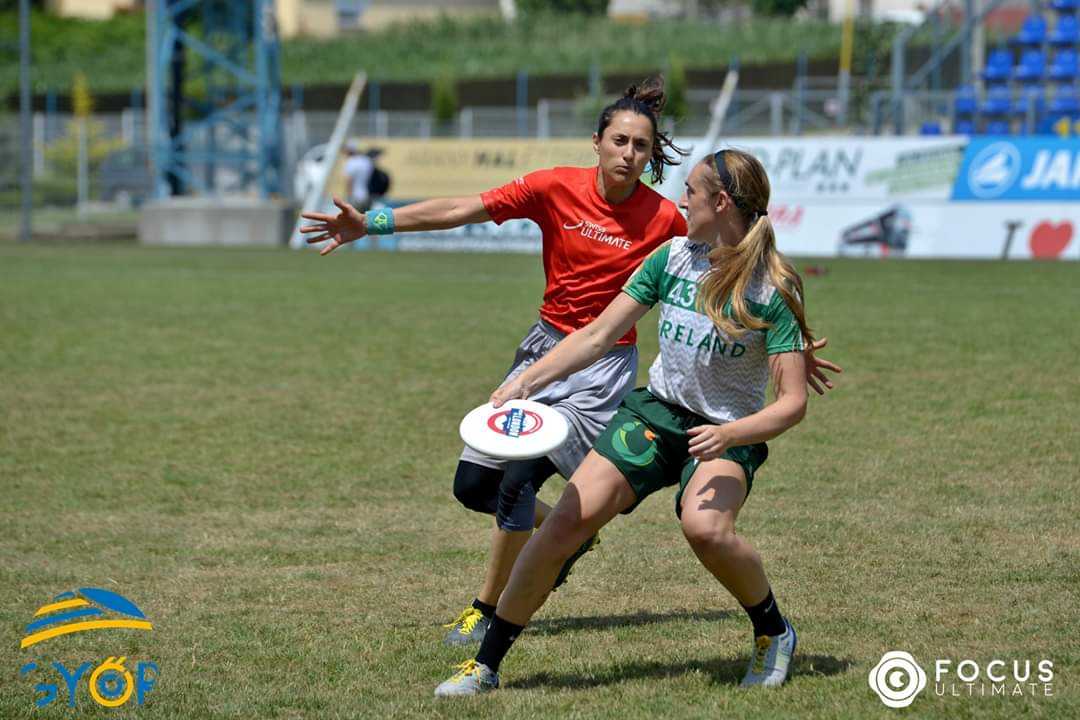 Sarah in action for Ireland against Switzerland at the European Championships in Hungary last summer.

“I would always have the mentality that if you’re going to go and compete, you should go and try and win,” she said of the championships.

“But it was still such a huge step forward for the Irish women’s team. We have had more success in mixed doubles in the past five or six years, and the women had struggled a little bit on the European scene, mostly due to the fact that we were split. Half would go play mixed and half would go play women’s. We all decided finally to play women’s.

“We had set a goal of medaling; we had never stated gold out loud. But everyone knew that it could be the year if things went well. We felt asif we definitely deserved it when we had to go through the toughest competitors. It was a great feeling to come out of it knowing that we were the best team in Europe.”

And Sarah herself would soon be recognised as the best individual player in Europe. In November she was crowned European Player of the Year.

“I couldn’t really believe it. I always have confidence in my own ability, but for other people to recognise it… I had the best year of my life in all aspects of it, so it was just a nice way to end the year. It’s still amazing to think it actually happened,” she said.

She also became the first-ever recipient of a Western People Sports Stars Award for ultimate frisbee in January at the 50th anniversary awards. 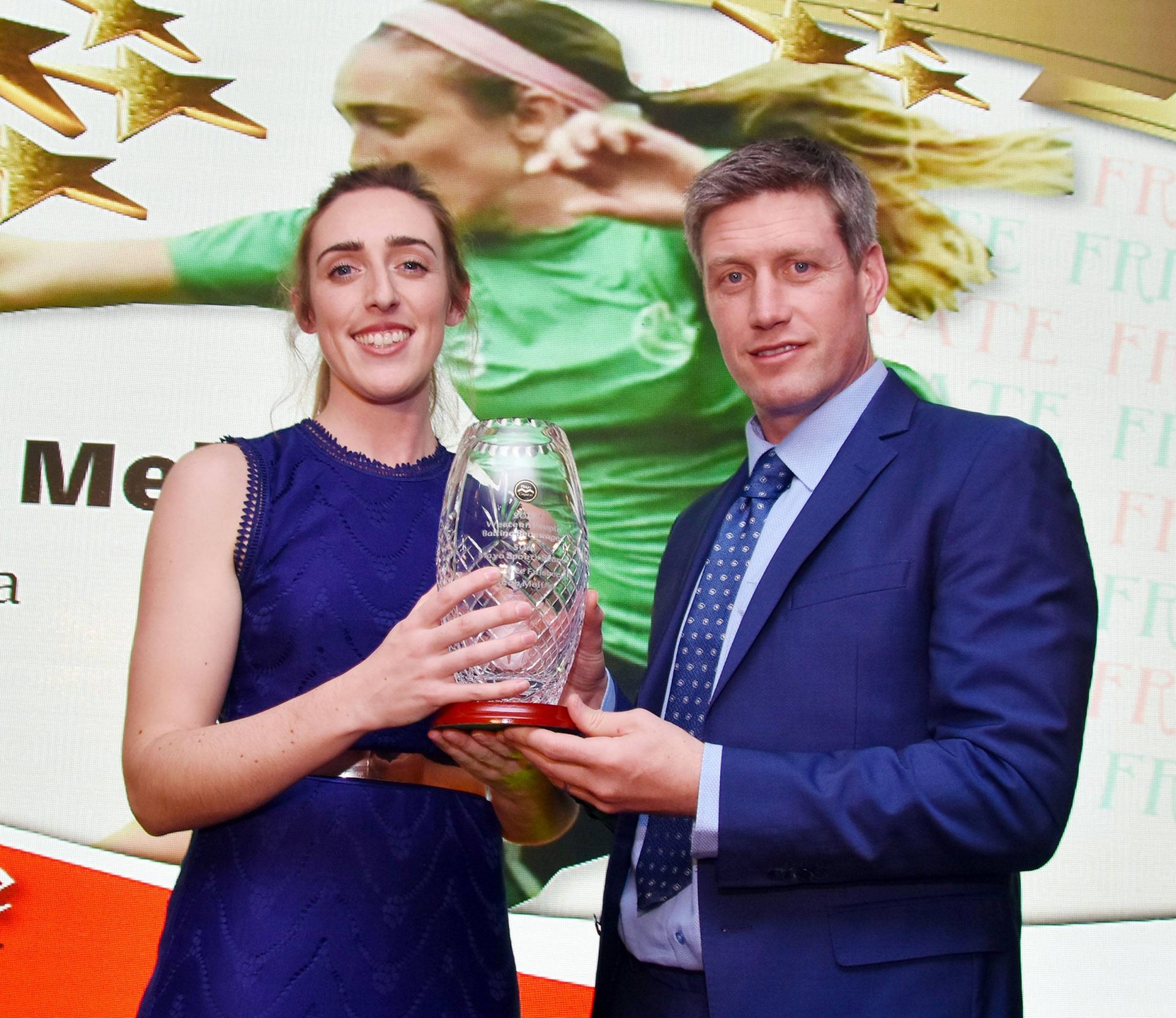 The Irish team were invited to Aras an Uachtarain by President Michael D Higgins after their success in Hungary, and while Sarah herself was unable to attend due to illness, she stressed how significant the invite was for the sport in Ireland.

“It was such an honour to get the invite, to be able to do that, like so many of the other sports teams you’d watch, It was a huge day, not just for the women’s team but for the sport in Ireland as a whole,” she said.

Sarah was also selected on the ‘Eurostar’ team, the pick of European talent sent to take on the US on their home soil in August. The Europeans began in San Diego and travelled up the west coast before jetting back east for the second half of the tour. It was her second successive time being chosen on the team, and second time being part of a winning tour, but the standard of her play in 2019 drew particular attention; one of her more spectacular catches was featured on ESPN.com and watched around the world.

“It was just such a phenomenal experience,” said Sarah. “These girls we were playing against in the States are the people that we would watch online, pay to watch them play even. They’re like the idols of the sport. So to get to go over there and play against them, to match up against them and see that ‘okay they’re amazing, but we’re just as amazing.’ It’s just that we’re from Europe, and the promotion and visibility of the sport isn’t at the same level.

“So it was amazing. It’s probably the best thing I’ve ever done; I’m very lucky to have had that experience twice.”

On top of everything else, Sarah also dipped her toe into coaching for the first time last year. She was the assistant coach of the Irish under-24 team at the World Championships in Germany and said it is definitely a side of the game she wants to explore.

Unfortunately, the sport has ground to a halt in recent months. Ireland would have gone into the 2020 World Championships in Leeuwarden in the Netherlands in July as legitimate dark horses, but they have been called off. Sarah is optimistic that the European Club Championships, fixed for October-November, may still go ahead, but other than that it’s set to be a quiet year.

For now, Sarah is back home. She recently completed her Masters in Education to qualify as a German and Spanish secondary-level teacher and is spending the downtime applying for positions. But when ultimate frisbee does resume, she’ll be ready and waiting.