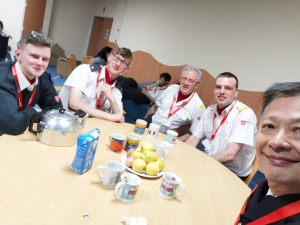 A friendship forged in Lourdes last year between Order of Malta members from Mayo and Hong Kong has resulted in the Westport branch of the Order of Malta receiving delivery of over a thousand face masks which they will use in their frontline duties.

The masks arrived in Westport this week having made the long journey from the Far East, the delivery of which was organised by Ben Lee, a member of the Hong Kong Order of Malta who stayed in contact with members of the Westport branch after kindling a friendship at the 2019 Order of Malta International Pilgrimage in Lourdes.

Keelan Moran, a member of the Westport branch, explained more about how the two groups met and struck up a chord with one another.

“The Pilgrimage to Lourdes normally happens on May Bank Holiday weekend but was cancelled this year. There would be members from lots of different countries from around the world. Last year, we were working with a team from Hong Kong.”

“We kept in contact since last summer and would talk about each other’s operations. They were fascinated by the emergency frontline work that we do because it would be very different to how they operate in Hong Kong as they’d work more so with families living in poverty.”

Keelan said that Ben Lee and his colleagues in Hong Kong became aware of the Westport branch’s need for protective gear for working on the frontline and immediately sprang into action.

Members of the Westport Order of Malta with their shipment of PPE masks from Hong Kong.

“We were talking about the work we were doing and the type of equipment we need and they just happened to mention they had a big shipment of masks that were there and available for us.”

“They sent over about a thousand masks and we’re going to divide them out between the units in our region. We all need them at this stage and going forward for our regular duties.”

“PPE has been hard to come by and it’s not cheap so we’re very thankful to them in Hong Kong for sending this on. It was very generous of them. We would be used to generosity and donations working as volunteers in Ireland but it was a bit different and a bit special to have this type of generosity come from so far away.”