Full cost of staging Other Voices Ballina is revealed 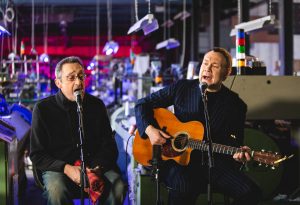 February’s ‘Other Voices’ music festival brought 30,000 people to Ballina and generated €1.3 million for the local economy, according to a report compiled by Mayo Co Council.
Anne McCarthy, Head of Strategic Projects, told councillors last week that the festival cost €420,000 to stage, which included all component elements and filming for broadcast on RTÉ and live streaming online. The council invested €75,000, which was included in the budget for 2020, with the remaining funding delivered through Creative Ireland Mayo, Leader, local fundraising, sponsorship and the Department of Culture, Heritage and the Gaeltacht.
Artists such as singer-songwriter David Gray, Elbow, Kildare rapper Jyellowl, Soda Blonde, JC Stewart, The Howl and The Hum, Skinny Living, rapper Denise Chaila and Jesca Hoop all took to the stage at St Michael’s Church for the two-day event, which was curated, managed and delivered by South Wind Blows.
Ms McCarthy said the total media coverage of the weekend reached around 30 million people through press, radio and social media.
“Conservatively estimated the economic benefit amounts to €1.5 million. Almost every business reported benefit from the weekend which was a significant boost to the town during a shoulder period. Hotel occupancy was at capacity, taxi and minibuses reported the weekend was busier than Christmas while restaurants and pubs experience a huge boost in trade. Hotels, B&Bs and accommodation in Ballina, Sligo, Enniscrone, Crossmolina, Killala and Ballycastle also benefited significantly from the initiative.”
Ms McCarthy said there is concerted demand for the festival to return and to have more certainty around dates and funding.
“The preference in Ballina is for a three-year cycle to bed the festival in the annual calendar and build on the momentum of 2018 and 2020.”