Casey: ‘I didn’t speak to David Brady for two years’ 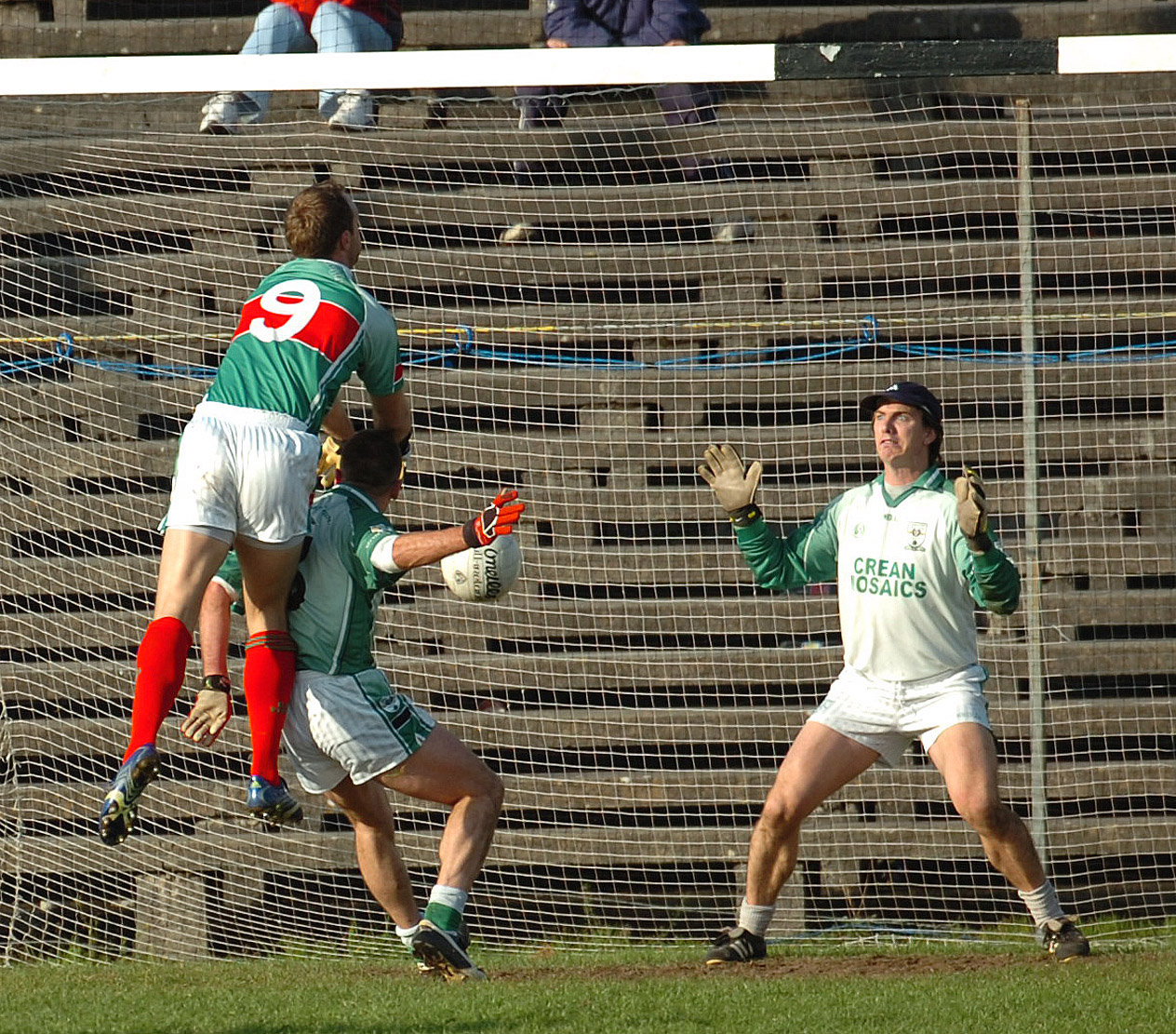 In the latest of our series of classic games from the past, Mark Higgins reflects on a cracking county final from 13 years ago that effectively marked the beginning of the end for a generational Ballina Stephenites team.

Ballina Stephenites reached the mountaintop on St Patrick’s Day, 2005, when they overcame Portlaoise at Croke Park to become All-Ireland club football champions. It was the culmination of a decade or more of trying for the core of the Stephenites team, several of whom had been involved back in 1999 when they kicked an All-Ireland title away against Crossmaglen.

It was probably inevitable, after a long-awaited high like that, that the tide would go out on the club for a couple of years thereafter. Ballina failed to reach a county final in the two seasons after their All-Ireland win, with their fierce rivals from Crossmolina claiming the Moclair Cup in 2005 and 2006.

But the ‘Na were back in the decider in 2007 under the stewardship of Liam Higgins, and with the spine of their All-Ireland winning side still very much in place. David Clarke had taken over from John Healy in goals but the likes of Martin Wynne, Colm Leonard and Brian Ruane were still marshalling the defence and the inter-county pairing of Ronan McGarrity and David Brady were at midfield. There was more inter-county pedigree in the half-forward line in the shapes of Pat Harte and Ger Brady while Paul McGarry and Stephen Hughes were the primary source of scores.

Charlestown were back in the county decider for the first time since lifting the trophy in 2001, and for just the fourth time in their 100-plus year history. But they were a coming team in the county, with seasoned campaigners like Aidan and Dermot Higgins, David Tiernan and John Casey (well-settled as a goalkeeper by this point after making the move from the forward line around the turn of the millenium) complimented by a young cohort led by the then 18-year-old Tom Parsons, who would be called up to join John O’Mahony’s Mayo panel the following spring.

They also boasted the likes of Kevin Deignan, Richard Haran and Tony and Paul Mulligan in attack, one of four sets of brothers (along with the Higgins boys, John and Enda Casey and David and Mark Caffrey) starting on the Sarsfields team.

This final was turned on its head in a frenetic eight-minute spell early in the second half, in which the Stephenites struck for all three of the game’s goals. They had trailed by three at half-time, Charlestown having looked much the sharper side in the opening 20 minutes. But the decision was made to move David Brady from midfield to the edge of the square for the start of the second period and man from the Quay wreaked havoc, batting home a goal himself in between setting up another pair for his brother Ger and Stephen Hughes. From thereon in, Charlestown were in chase.

“We threw it away, I’ve bad memories of it,” said John Casey this week. The All-Star forward was a busy man at the time, playing for Charlestown while training Easkey in the Sligo senior championship. Easkey drew their county semi-final with Eastern Harps and their replay was fixed for the same day as the Mayo county final, meaning Casey had to miss the Easkey game. His eldest daughter Ava was also born the week before the final.

“It was a year that promised so much and it was a game that we were completely in control of, bar those few minutes after half-time. There was a high ball into the square, I flapped at it and I think Brady ended up knocking it into the net,” continued Casey.

The East Mayo men had started well, with Parsons and team captain Tiernan dominating the middle third early on and the half-back line of Higgins, Higgins and Deignan repelling most of what the Stephenites could throw at it. At the other end, a string of scores from Ollie Conway, Haran, Martin Mulvaney (now Charlestown’s manager), Parsons and Tony Mulligan were supplemented by a brace of Paul Mulligan frees and by the 27th minute, the Sarsfields were 0-7 to 0-2 up.

Tiernan was playing like a man possessed in midfield but he was also sailing close to the wind. He picked up a yellow for an off-the-ball rattle of McGarrity and then was fortunate to avoid a second for another foul on the same man moments later. The Charlestown manager, Ciaran McBrien, took action and withdrew his captain for the closing minutes of the half but Ballina would kick two crucial scores while ‘Ginger’ was absent, one each from Ger and David Brady, to leave it 0-7 to 0-4 at the break.

Tiernan was put back in for the restart but the momentum of the game had shifted; Ballina sent Brady to full-forward and moved Pat Harte to midfield, where he helped to wrestle control. The first goal, finished well by Ger Brady after David Brady and Paul McGarry combined, drew them level at 1-5 to 0-8; the second, palmed home by David Brady after a long delivery from brother Liam, gave Ballina a lead they would never relinquish. It’s a goal that still bothers Casey to this day.

“I felt I was semi-responsible for losing the game. I pulled off the best save I’ve ever pulled off in the first half of that game, but nobody remembers that; people remember the high ball coming into the square. Everyone remembers the mistakes, and that’s my main memory of that game,” he said. 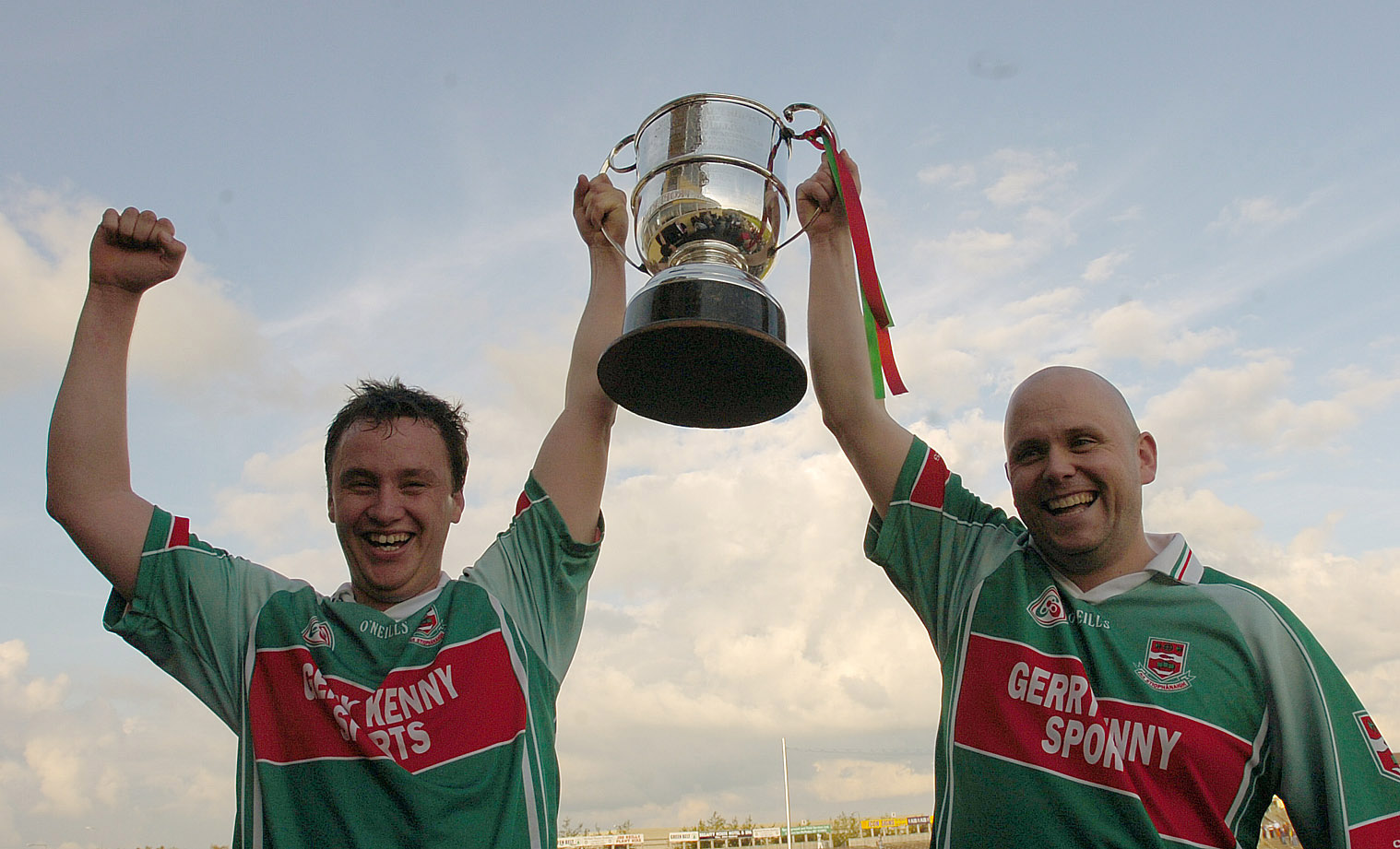 Stephen Hughes slipped home a third goal soon after to compound Charlestown’s woes, and though the Sarsfields continued to battle away, the five-point deficit was too high a climb. Mulligan kept them in touch with his frees and despite Ballina scoring just one point in the last 20 minutes, through Ger Brady, their backline denied Charlestown the goal they needed.

It was a game with a bit of needle to it too. Casey said that he didn’t speak to David Brady, his former Mayo teammate, for two full years afterwards because of some of the things said and done over the 60 minutes, though the two are good friends again today.

The final whistle signalled a record 36th Moclair Cup success for Ballina. It remains their last county title to this day. They went on to claim a third Connacht club title with wins over Tourlestrane and St Brigid’s but they underperformed in their All-Ireland semi-final against Nemo Rangers in Ennis the following February, and that champion team began to wane thereafter.

Charlestown, meanwhile, were back in a county final 12 months later, this time losing out to their fierce rivals from Ballaghaderreen. Their efforts would finally bear fruit in 2009, however, when they overcame Knockmore to claim the county title for the third time in their club’s history.