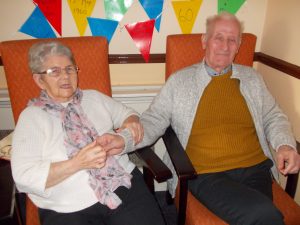 A Charlestown couple, who have just celebrated their 60th wedding anniversary, have shared the secret to their happy marriage.
Tom and Freda Colgan celebrated their diamond jubilee last weekend in St Anne’s Nursing Home where they have been residents since 2014.
The pair, whose August birthdays are one day apart, told the Western People that “enjoying life” has got them through and it doesn’t hurt that 82-year-old Tom, a native of Bohola, describes his wife as a “superstar”.
Tom and Freda, 83, a native of Exeter in Devon, met at a dance in England and married in the Sacred Heart Church in Exeter on May 15, 1960.
Tom worked in construction while Freda enjoyed her time as a shop assistant, The couple had three children — two daughters and a son, who is deceased.
Residents at St Anne’s were delighted to help the couple celebrate the momentous occasion on Friday, explained Karen Dewsall, director of nursing at the care home.
“They are a lovely couple. They celebrated in their home with the staff and other residents and enjoyed ’60s music, songs and a lovely cake. They had numerous telephone calls from their family,” she said.
The couple, who have eight grandchildren and five great grandchildren, lived in Exeter before moving to Charlestown in 2000 and enjoy nothing more than watching a Western drama like The High Chaparral.