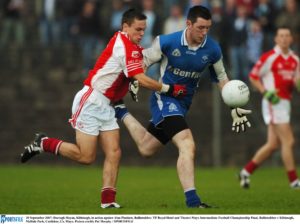 Keith captained the Mayo minor team on which Darragh starred in 2003. Commenting on Twitter, the multiple All-Star said:  [Darragh was] an absolute gent. Always had a smile on his face and great for a story! Will be sadly missed.”

Darragh played at midfield on the Mayo minors in 2003. Although the team failed to win a Connacht title, it was certainly not from a want of talent with Higgins, Trevor Howley, Aidan Kilcoyne, Colm Boyle, Mark Ronaldson and Michael Conroy all going on to star for the Mayo seniors. 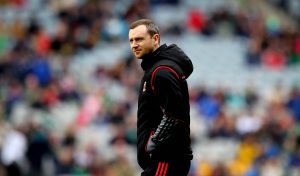 Renowned corner-back Higgins is one of the many individuals and clubs to have paid tribute to the 35-year-old Kiltimagh native since news of his passing broke on Tuesday.

In a tribute posted on its Facebook page, Kiltimagh GAA Club said:

“Everybody at Kiltimagh GAA Club is absolutely devastated to hear the news of the passing of Darragh Sloyan. Darragh was one of the finest footballers to pull on our blue and white jersey and he proudly represented the club at all levels.

“Darragh also wore the green and red at underage level.

“Deepest sympathies to his family at this difficult time.

Mayo GAA said: “Everyone at Coiste Chontae Mhaigheo would like to extend their deepest sympathies to the family and friends of the late Darragh Sloyan.

“Darragh played for Mayo at a number of levels including the Mayo minor teams of 2002 and 2003. Ar dheis Dé go raibh a anam.”

Castlebar Mitchels, in a statement, said:

“All at Castlebar Mitchels are deeply shocked and saddened to learn of the sudden passing of former player Darragh Sloyan.

“Darragh joined our senior team from his native Kiltimagh in 2009 and was a star player on our run to the county final in 2010.

“His wonderful character and personality led to many great, long-lasting friendships being formed. He will be sorely missed by all who had the pleasure of spending time with him, both on and off the field.

“We extend our deepest sympathies to Darragh’s family and friends.

“May his gentle soul rest in peace.”