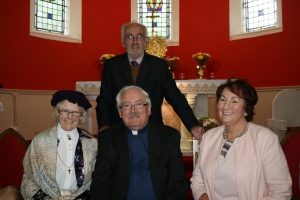 Monsignor Terence Nolan celebrating the 50th anniversary of his ordination in 2016 in St Mary’s Church, Tooreen, alongside his sisters Maureen and Louise and brother Michael.

Monsignor Terence Nolan, Cloongownagh, Tooreen, breathed his last on Easter Sunday, April 12. He was among friends in San Antonio, Texas, his beloved home for more than 50 years.
During those five decades, Monsignor Terence was a regular visitor to Mayo, twice per year when his mother Margaret was living, and annually since her death, which occurred 11 years ago also on Easter Sunday, April 12. He was due to return again in July, having received a return ticket as a gift upon his retirement in February.
A keen golfer, who took to the course with friends every Tuesday, Monsignor Terence supported Mayo football but it was hurling that truly held his heart.
He was an accomplished hurler, a proud, founding member of Tooreen Hurling Club and its very first captain. In the early 1960s, he was a member of the St Mary’s College, Galway, team that reached an All-Ireland Colleges Final. Later, he won a West Mayo Junior Football title with Burrishoole, a feat achieved with some logistical difficulty as an East Mayo man attending the seminary in Wexford.
After completing his studies for the priesthood, Monsignor Terence moved to San Antonio in 1966 and took up his first position in the newly-established parish of St Thomas More.
The role brought many challenges to the young Irish priest, including the building of a new church and a constant turnover in the congregation as the personnel from the nearby army and air force bases were regularly redeployed.
While at St Thomas More, Monsignor Terence served as night chaplain in the army hospital, which admitted soldiers flown back each week from the war in Vietnam.
Many suffered horrific burn injuries. He later recalled, in particular, the devastating influx of casualties following the Tet offensive and described these years as some of the saddest times in his ministry.
Monsignor Terence served as parochial vicar and then pastor at parishes across San Antonio. He earned a degree in canon law from The Catholic University of America in Washington, D.C. in 1986. He held the position of adjutant judicial vicar and director of the Tribunal Office of the Archdiocese of San Antonio for a decade. He became archdiocesan chancellor and judicial vicar of the Tribunal Office, a role he fulfilled for almost 20 years.
From 2015 until his retirement, Monsignor Terence served as vicar for canonical services for the archdiocese. In addition to his Tribunal assignments, Monsignor Terence served in the 1980s as chairman of the Priest Personnel Board and was a former president of the Irish Cultural Society.
Monsignor Terence celebrated his Golden Jubilee in 2016 with Mass at home in St Mary’s Church in Tooreen followed by a gathering in his childhood home at which he spoke about his love for his family and his home village, but also his commitment to his community in Texas.
During that trip, in conversation with Roderick Maguire on Claremorris Community Radio, Monsignor Terence recalled his life from his childhood on the family farm to his school days in Tooreen National School and St Mary’s College.
He remembered his time spent in St Peter’s and his first taste of the San Antonio sun, alighting a Trans Texas Airways plane onto the hot tarmac in September ’66 as well as his many roles in the Archdiocese of San Antonio. 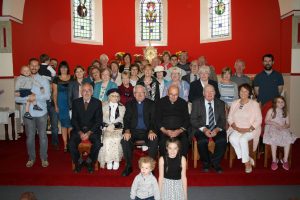 The friends and family of Monsignor Terence Nolan, who gathered in Tooreen, Ballyhaunis, on Sunday, August 14, 2016 to celebrate the golden jubilee of his ordination.

Monsignor Terence’s sister Maureen (Clare Court, Ballyhaunis) looked forward all year to his visits. With his rented car, he and his brother Michael (Clooncan, Ballinlough) would drive to visit their sister Louise and her husband Michael Lawrence at their home in North Cork. He was adored by his nephews and nieces in Clooncan and Kanturk and as teenagers, the boys were often the beneficiaries of distinctive American golf shirts.
Travel, and indeed road trips, were second nature to Monsignor Terence, who just last year, according to a friend from the seminary, travelled from San Antonio to a St Peter’s reunion in Cocoa Beach, Florida by car. It took him four days.
Broadcast on Catholic TV from San Antonio, Monsignor Terence’s Mass was watched by family and friends around the globe. The magnificent Cathedral of San Fernando, in the heart of the city, was largely empty but for a small group of close friends. The strict rules preventing public gatherings and the travel restrictions imposed since the outbreak of Covid-19 meant Fr Terence’s siblings Maureen, Michael and Louise, and indeed all his family, were separated from the occasion by thousands of miles.
In Texas, hundreds of his parishioners and friends took the opportunity to pay tribute online to Fr Terry, as they knew him, and express their gratitude for his pastoral work in communities across the Archdiocese over the years. Warm tributes were also paid to Fr Terence by his lifelong friends from St Peter’s Seminary.
The funeral mass was concelebrated by the Archbishop of San Antonio Gustavo Garcia-Siller, Auxilliary Bishop Michael Joseph Boulette and his friends, Fr Emmet Carolan (Cavan), Fr Michael O’Gorman (Cork) and Fr Paul Cleary (Cork).
Monsignor Terence Nolan, ar dheis Dé go raibh a anam dilís.