‘Doughnut’ drivers warned they are ‘marked’ men (and women) 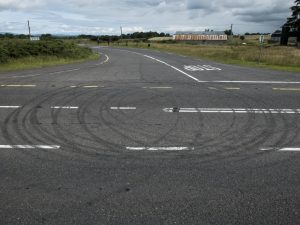 The county’s roads are peppered with ‘doughnut’ marks and gardaí have reminded motorists they can be prosecuted for the dangerous driving manoeuvre.
Despite recent tyre marks at junctions on rural roads and on sections of the N17, gardaí say they have not seen a significant increase in the number of reports from the public of motorists performing so-called doughnuts during lockdown. A Garda spokesperson said “quiet, rural roads” are the prime location for the doughnuts and the after-effects are there for all to see.
“The report level [in recent weeks] has been no different to normal but we would remind motorists they can be prosecuted,” said a Garda spokesperson. “The activity, if detected, could result in a charge of careless driving at the least and in some cases dangerous driving.”

A charge of dangerous driving can lead to a disqualification as well as hefty monetary penalties.

Apart from noise pollution and disturbance to local residents, ‘doughnut’ drivers are also causing damage to their vehicle’s tyres.
Gardaí say there have been prosecutions in relation to such offences in the past.