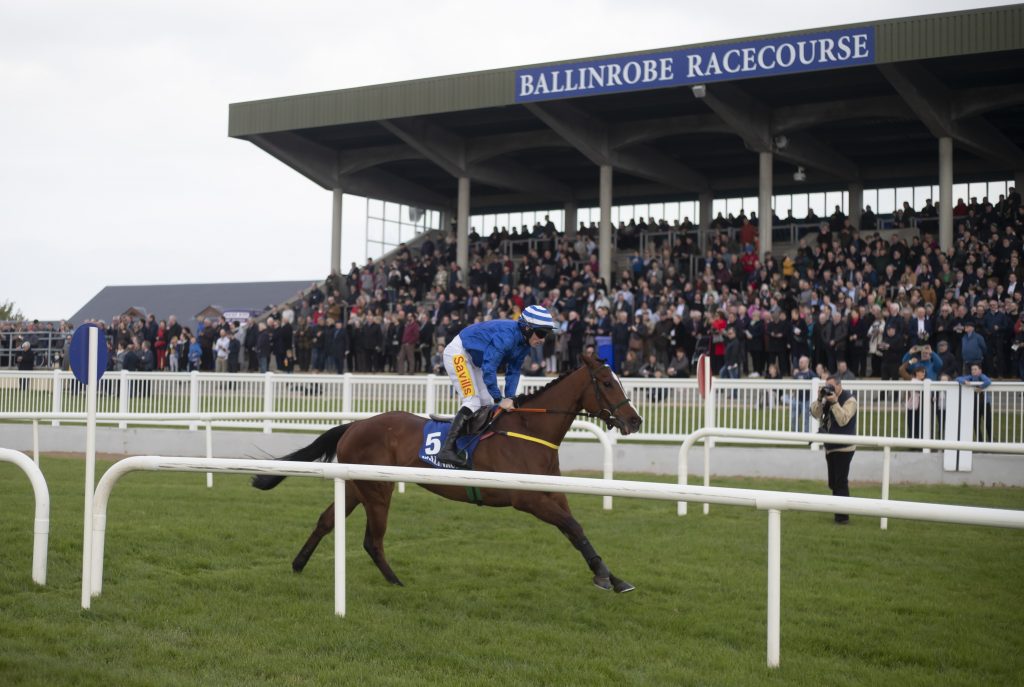 Local businessman Martin McHale was celebrating after Cenotice won the Maiden Hurdle at the first meeting of the 2019 season in Ballinrobe. There’ll be horses and jockeys but no punters when racing returns to the South Mayo track in July.

Fans of horse racing in Mayo will have to wait longer than most before action returns to Ballinrobe, after Horse Racing Ireland today released its full programme of fixtures for June and July.
But even when the Sport of Kings does make its way back to the popular South Mayo track, it’s on the television where punters will have to watch events unfold as racing will be conducted behind closed doors for the foreseeable due to the strict new HRI protocols in place.
Irish racing might be set to return to Naas on June 8 but it’s a full six weeks after that before Ballinrobe gets to hold its first meet of the year, an evening National Hunt card on Monday, July 20.
Put into context, Roscommon Racecourse will have held five meets by then, their first on June 15 and last on July 13.
Ballinrobe, however, has been granted a second meeting (an all flat card) just 48-hours after its first, on the afternoon of Wednesday, July 22, which is the week leading up to the start of the 7-day Galway Festival which will be run in front of empty terraces from Monday to Sunday, July 27 to August 2.
“There will be eight-race cards run at every opportunity where stable capacity allows, with the protocols requiring one stable per horse for hygiene reasons,” explained Jason Morris, HRI’s Director of Racing.
Racing fixtures in Connacht: Ballinrobe – July 20 (NH), July 22 (F); Sligo – July 2 (F); Roscommon – June 15 (F), June 22 (F), June 24 (NH), July 7 (F), July 13 (NH); Galway – July 27 (F), July 28 (F), July 29 (NH), July 30 (NH), July 31 (NH), August 1 (F), August 2 (F).