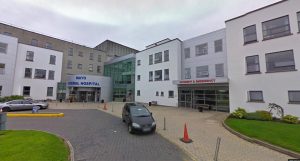 by Orla Hearns
A north Mayo woman claims her father’s death from Covid-19 last month was due to “dreadful management” in Mayo University Hospital and is calling for someone to be held accountable.
The family of the late Jackie Carolan (79) of Ballymunnelly, Bellacorick, is seeking an investigation into his death at the hospital on April 1 last on the grounds that poor infection control resulted in him contracting the virus in the hospital while he was being treated for a minor stroke.
Mr Carolan’s daughter, Teresa Shaw, claims positive and suspected Covid-19 patients were being treated in an isolated bay in the same ward that her father was admitted to on March 18 last and claims that she observed staff, who appeared to have inadequate PPE gear, attending to confirmed and suspected cases when she visited her father on the morning of his death.
She claims she and her family struggled to gain an overall picture of her father’s health and treatment throughout his stay in the hospital, saying that staff did not seem to want to talk to them.
Throughout the first week of his treatment most of the phone conversations that the family had with staff related to how they would manage Jackie’s rehabilitation until March 26 when staff advised that his infection markers were up.
Over the weekend, the family was advised that Jackie had had a chest x-ray but they understood that this related to his stroke treatment. It was not until the Monday morning, March 30, that they learned that Jackie had been put on IV antibiotics and oxygen.
Teresa, who is a nurse, stressed that staff had not made any reference to Covid-19 at that point.
The following morning the ward manager advised that Jackie was being screened for the virus and would be placed in the Covid-19 bay on his ward.
“That was the first that I heard of that. I never would have imagined in my wildest dreams that they would be isolating (Covid-19) patients within the elderly care ward,” Teresa said.
On the morning of April 1, the Carolan family was contacted by the hospital to say that Jackie’s condition had deteriorated. Teresa and her sister travelled to the hospital to see their father.
“We were not prepared for what we were walking into,” Teresa said, adding that there was nothing to notify visitors that there were Covid-19 patients on the ward, apart from hearing references among staff.
She claimed she observed one nurse that had been looking after a confirmed Covid-19 patient also attending to a suspected Covid-19 patient and maintained that the staff’s PPE gear appeared inadequate.

Jackie Carolan passed away at 11.05pm on April 1 and two days later the results of his Covid-19 test were returned as positive.
Teresa said she emailed the hospital during her father’s treatment asking management to ensure that Covid-19 patients were treated in isolation. The hospital’s response was that it was following the HSE guidelines that were in place at that time.
She claimed that since her father’s death the hospital has advised that it now has three dedicated Covid-19 wards.
Teresa said the hospital’s handling of her father’s case raised lots of questions from an infection control point of view, adding that her family has requested his medical notes and wants to know who will be held accountable for what happened.
“Mayo University Hospital did not do everything to protect patients and staff from cross infection. My dad did not have a chance to recover from his stroke because of the way they managed the hospital. He picked Covid-19 up in the hospital.”
In a statement to the Western People, the HSE expressed its sympathies to the Carolan family but stressed it cannot comment on individual cases.
It said a system of streaming patients into Covid-19 and non-Covid-19 pathways has been in place at Mayo University Hospital since mid-March in line with the guidance at the time to ensure confirmed or suspected cases were kept physically separate from other patients.
“Clearly, while every effort is made to ensure patients are streamed separately, occasionally it will happen that a person in a designated ‘non-covid’ space will turn out to be positive as s/he may not have shown any symptoms,” the statement read.
It also outlined how MUH’s clinical staff have been separated into teams to minimise contact between staff and reduce the risk of healthcare worker and patient infection – based on the national guidance provided at the time.
“These are among a range of infection prevention and control practices in place across Mayo University Hospital to reduce infection rates amongst patients and staff.
“This case is currently being reviewed through the hospital’s quality and safety processes and the hospital has been in direct contact with the family in relation to this. It would not be appropriate at this time to comment further publicly,” the HSE statement concluded.