Martin Sweeney, Straide’s man for all seasons, has died 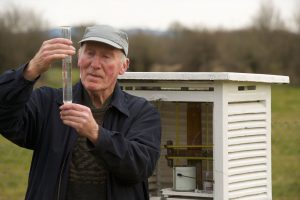 Martin Sweeney pictured beside his weather station in Straide a few years ago.

Martin Sweeney, the veteran weatherman who recorded the climate in Straide for more than half a century, has passed away.

Mr Sweeney, who was in his eighties and had been the local postman up to his retirement at the turn of the millennium, made a remarkable contribution to the study of meteorology in Co Mayo.

From his back garden in Straide, Martin faithfully recorded central Mayo’s weather for decade after decade, sending reports to Met Éireann on a daily basis.

Rain, hail, storm or shine, with the help of a few neighbours whenever he was away, Mr Sweeney maintained a near-continuous daily catalogue of Straide’s weather.

Last August, the national meteorological service upgraded the Straide station to take automatic readings, so Mr Sweeney no longer sent in his recordings.

“It is the end of an era,” he told the Western People in September, standing in his living room on a cloudy afternoon.

Newspaper clippings were scattered across the table: one a Western People report on the record-breaking summer heat of 2018 and another from March 1967 detailing a freak lighting bolt that destroyed a house in nearby Ballyvary.

Although August was the first month his services were no longer required, his logbook, peeping out from underneath the newspaper reports, detailed the month’s climate.

In precise handwriting, he recorded the temperature of the air, soil, and grass, as well as humidity levels and sunshine, although Mr Sweeney explained at the time that Mayo experienced very little of the latter due to the “large number of depressions and fronts from the Atlantic”.

One of his favourite weather facts was that there was nearly as much sunshine on July 2, 2018 (when he recorded 15.7 hours of sun) than in the whole of December 2018, which saw just 16.3 hours of sunshine. He was a wonderful man for fascinating facts about Mayo’s climate and could effortlessly reel them off.

The veteran weatherman began recording rainfall frequency for Met Éireann in 1963, upgrading his site to a climate station some 20 years later.

A postman for 41 years, Mr Sweeney always had a love for the outdoors and fresh air. He recalled being caught out while doing his delivery round on some “very bad days”.

But there is one day he never forgot: September 16, 1961, the day of Hurricane Debbie, a Category One hurricane forced him to abandon his deliveries at midday. When the wind increased to hurricane force he could feel the roof of his house “waving up and down”. By 3pm, the winds had settled and he was back out on his bike delivering letters and parcels.

“People should always move indoors when there is thunder,” Mr Sweeney warned. “The most dangerous places during a thunderstorm are high ground, large flat fields, and bogs.

“Never go under a tree,” he added.

Mr Sweeney, like so many of his generation, did not benefit from a third-level education but he had a bank of knowledge about meteorology that would put many university professors to shame. He published a book in the late 1990s about climate conditions in Straide and regularly featured in the pages of the Western People and other local newspapers, providing fascinating reports for readers on the major weather events in Co Mayo, including the Big Freeze of 2010-11. His articles were always diligently researched and written in an easy-to-understand style that readers loved. Weather watching was the passion of Martin’s life and he enjoyed sharing his vast, self-obtained knowledge with people.

Martin Sweeney truly was the man for all seasons, a faithful chronicler of our ever-changing climate and a passionate lover of nature. In the long, bitterly cold winter of 2010-11, he told the Western People how he had been feeding birds each morning, rising amid the sub-zero temperatures even though he was now in his mid-seventies. A robin became so tame and trusting that one morning it hopped onto Martin’s hand as he spread the bird food in the back garden. It was a lovely image of a man utterly at one with the natural world around him, and Martin Sweeeny was certainly someone who lived in complete harmony with the beautiful Straide landscape.

Martin is sadly missed by his brother Tommy (Cork), sister in law Nellie (Straide), nieces, nephews, neighbours and a wide circle of friends.

Removal is tomorrow (Thursday) at 6pm to St Peter and Paul’s Church, Straide.

Mass on Friday at 12 noon followed by burial in Straide’s New Cemetery.

Due to HSE guidelines regarding Covid 19, the funeral service and burial for Martin is private and confined to family members only.
A Memorial Mass to celebrate Martin’s life will be held at a later date.
May his gentle soul rest in peace.