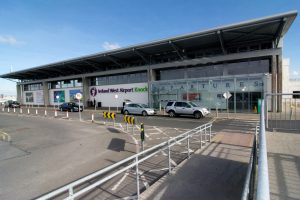 Management at Knock Airport are hopeful the facility will re-open in the summer.

Ryanair has listed seats from Ireland West Airport to a number of destinations, including sun holidays, from July 1 but no date has been confirmed for the re-opening of the airport.
The low-fares airline put seats to ten airports in the UK, Italy, Spain and Portugal on sale last week, but without the government’s go ahead for the airport to open there’s no guarantee the flights will take off. Aer Lingus also has seats for sale from Knock to London Gatwick, starting next month on June 1.
The airport’s communications manager Donal Healy confirmed there are no plans to recommence operations yet.
“We are monitoring the situation and liaising with the regulatory bodies and the government. We are awaiting official guidance,” he said.
Management is also communicating with airlines on when they can expect schedules to recommence. The airport closed its doors on Sunday, March 29, after Ryanair and Aer Lingus grounded their fleets. There is no mention of airports in the Government’s re-opening roadmap and there have been mixed messages from Government, with Minister for Health Simon Harris saying it’s “highly unlikely” that air travel will resume this year while the Taoiseach is “more optimistic”.
Irish air travellers might not have to self isolate at their destination but the fact they will have to lock themselves away for 14 days when they return home is another deterrent for travel.

However, Mr Healy is hoping the airport will be reopen later this summer and expects an update in the coming days.