Lee Keegan at full-back? The Irish Sun names its best Mayo team of the last 20 years 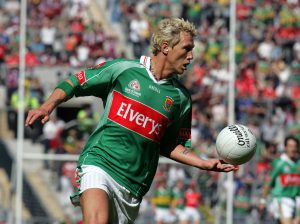 Ciaran McDonald is selected at centre-forward on The Sun’s Best Mayo team of the last 20 years. Picture: INPHO/Andrew Paton

The Irish Sun has been running an interesting feature over the past fortnight where it has been selecting the best intercounty teams of the last 20 years. Journalist Gordon Manning certainly raised a few eyebrows with one or two of his selections on the Mayo team.

There’s no surprise in goals with David Clarke selected. The only other contender would have been Peter Burke who, surprisingly, is not even mentioned in Gordon’s analysis. Burke was a fine ‘keeper in his day but it is hard to oppose Clarke.

The half-forward line consists of Diarmuid O’Connor, Ciaran McDonald and Alan Dillon while the full-forward line is along fairly predictable lines with Mayo’s two top scorers Conor Mortimer and Cillian O’Connor on either side of Andy Moran. 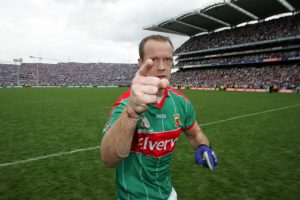 There are arguments to be made for the inclusion of several players. For example, Peader Gardiner, who was a great stalwart for the county, is unlucky to miss out in the half-back line, although it’s difficult to oppose Paddy Durcan after such a great summer in 2019.

Perhaps the most glaring omission is Kevin McLoughlin who has been Mr Consistency for Mayo for the past decade. He’s popped up with vital scores at crucial times and even spent a summer as a sweeper in 2016, an unfamiliar role he grew into as that summer progressed. The Knockmore man failed to pick up an All-Star despite a stellar season in 2012 and has to be one of the most underappreciated intercounty footballers in the country.

Whether we agree or disagree with the team, it’s an interesting exercise and one that can certainly while away a few lockdown hours as we continue to adapt to a summer without GAA.

See Gordon’s full article here where he offers interesting analysis on each of his selections:

Who makes the best Mayo football starting line-up of the past 20 years?