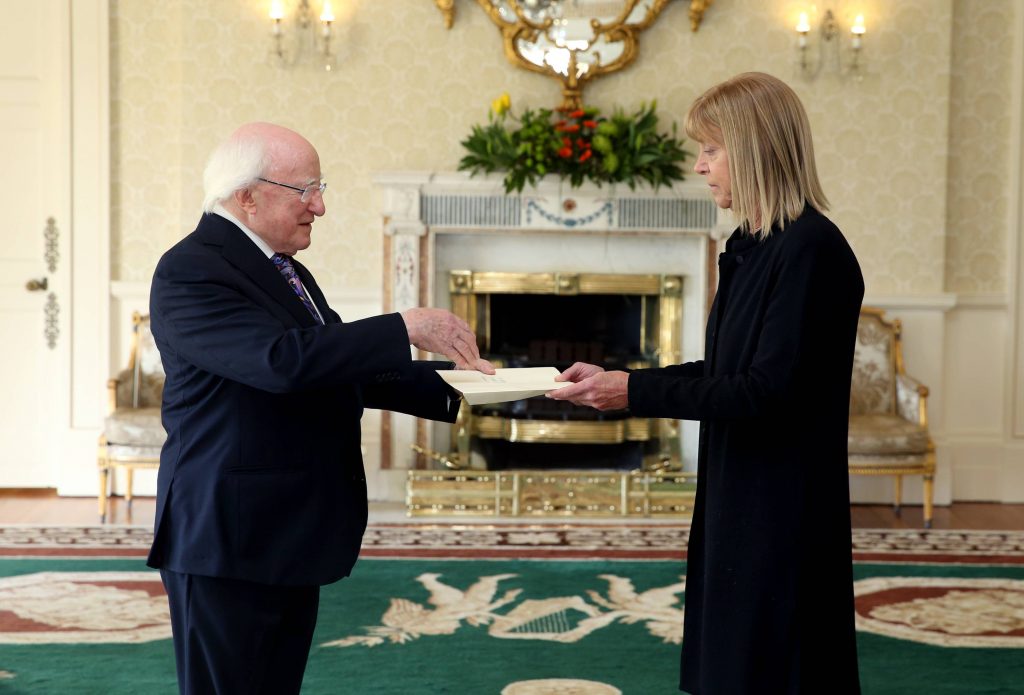 The late Argentine Ambassador to Ireland Laura Bernal, right, presenting her letter of introduction to President Michael D Higgins in 2016. Ambassador Bernal will be buried in Foxford today.

The funeral Mass of the late Argentine Ambassador to Ireland Laura Bernal takes place in Foxford today.
Ambassador Bernal passed away suddenly at her residence in Dublin last month but in a break from the normality where the remains of most serving ambassadors are repatriated to their home country, it’s in keeping with the wishes of the Bernal family that her burial is in the town that gave birth to Admiral William Brown, founder of the Argentine navy.
Described by her colleagues at the Embassy of Argentina as a person of integrity who was able to build friendly and cooperative relationships, Ms Bernal had served in Embassies in Greece, Colombia and Portugal before her posting to Ireland.
Born in Buenos Aires in 1956, Laura Bernal had visited Foxford, where Admiral William Brown was born in 1777, on numerous occasions. Her most recent visit was in November to mark the visit of the ARA Libertad to Ireland.
The funeral Mass is in St Michael’s Church, Foxford at 12 noon after which the funeral cortege will proceed to Craggagh Cemetery for interment.
The funeral mass will be streamed on the mayo.ie website.

Littering at Mayo beauty spot is “disrespectful and appalling”