Cillian at 28: Seven of the best from Mayo’s birthday boy 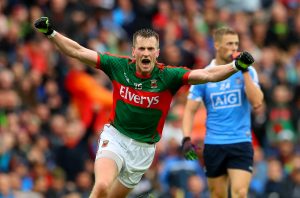 As Cillian O’Connor celebrates his 28th birthday today, we look back at seven of his best performances in an illustrious Mayo career that has seen him become the highest scorer in the history of the All-Ireland Senior Football Championship. 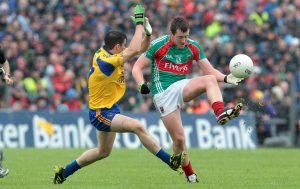 July 17, 2011: Mayo v Roscommon, Connacht Senior Championship Final, Dr Hyde Park
Thrown into the lion’s den against Roscommon in The Hyde on an atrocious afternoon for a place-kicker, the young Ballintubber man gave Mayo fans a taste of what was to come in the decade ahead with a flawless kicking display that saw him score eight of Mayo’s 13 points in a two-point victory.
Roscommon were the reigning Connacht champions and a vocal home support did their very best to intimidate Mayo’s teenage marksman. But it was all to avail. Cillian proved he had ice in his veins by kicking eight superb frees, defying the appalling weather conditions as well as the vociferous Rossies to lead Mayo to the first Connacht title of James Horan’s reign and the first of a five-in-a-row.
A star had been born on that miserable afternoon in Roscommon. Mayo had a new marquee forward. 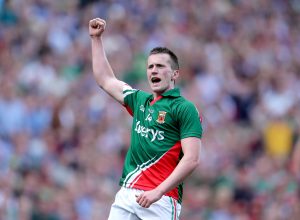 Cillian O’Connor celebrates after scoring a ’45’ into The Hill against Dublin in 2012. Picture: INPHO/Cathal Noonan

September 2, 2012: Mayo v Dublin, All-Ireland Senior Championship Semi-Final, Croke Park
The renowned sports journalist Christy O’Connor recently recalled a fascinating story in his Echo Live column about Cillian O’Connor’s preparation for the 2012 All-Ireland semi-final clash against the then reigning champions Dublin.
O’Connor downloaded the favoured Dublin chant, ‘Come on ye boys in blue’ and had the song blasting from his earphones into his eardrums as he practised his free-taking in the run up to the match.
The novel preparation paid off. Cillian converted six placed balls, including three crucial 45s – two of them into The Hill in the opening 10 minutes. Preparation pays.
Mayo withstood a late Dublin rally to win by 0-19 to 0-16 and book a place in the All-Ireland final for the first time since 2006. 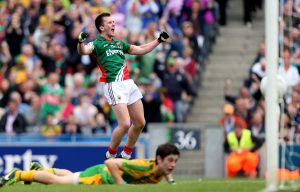 August 4, 2013: Mayo v Donegal, All-Ireland Senior Championship Quarter-Final, Croke Park
Cillian was in the form of his life in the summer of 2013. He hit 3-3 against London in the Connacht Final as a rampant Mayo coasted through the provincial series, scoring 9-48 in three matches.
The All-Ireland quarter-final against Donegal was a real grudge affair, the Ulster men having deprived James Horan’s side of All-Ireland glory a year earlier. Mayo’s performance on that unforgettable afternoon in Croke Park was arguably the greatest of the decade. Cillian scored 3-4 as Mayo hit Jimmy McGuinness’ men for 4-17. It was a 16-point rout and Cillian had scored six goals in just two games.

Sadly, he was forced off with a shoulder injury in the All-Ireland semi-final against Tyrone, and although the Ballintubber man recovered to face Dublin in the final, he was not at his lethal best, Mayo losing the decider by just a single point. 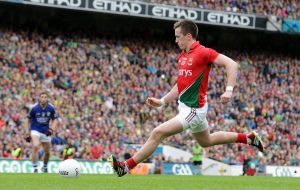 Cillian O’Connor scores from the penalty spot against Kerry in the drawn All-Ireland semi-final in 2014. Picture: INPHO/Morgan Treacy

August 24, 2014: Mayo v Kerry, All-Ireland Senior Championship Semi-Final, Croke Park
Fourteen-man Mayo looked dead and buried shortly after half-time in this All-Ireland semi-final when the Kingdom’s marksman James O’Donoghue kicked his side into a double-score lead, 0-10 to 0-5. Having lost Lee Keegan to a red card late in the first-half, it looked as if the three-in-a-row Connacht champions would spend the second half chasing Green and Gold shadows.
Instead what ensued was barely believable. Mayo turned a five-point deficit into a five-point lead with O’Connor kicking 1-5 of his team’s second-half total, including a penalty that was rifled home with typical calmness. It looked like a famous Mayo victory was on the cards until some ageing warrior named Kieran Donaghy joined the fray… and the rest is history. 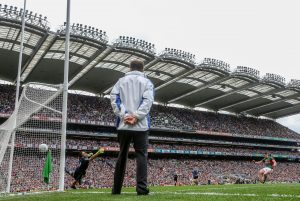 August 30, 2015: Mayo v Dublin, All-Ireland Senior Championship Semi-Final, Croke Park
If you were ever going to bet the farm on a man to score a penalty in Croke Park it would have to be Cillian O’Connor. His coolness under the most intense pressure was never more in evidence than in the 68th minute of this All-Ireland semi-final when Mayo were awarded a penalty after Colm Boyle’s kamikaze run saw him taken out by about five Dubs.
Only a few minutes earlier, Mayo had trailed by 2-12 to 0-11 with O’Connor’s place-kicking having single-handedly kept them in the game – he scored nine points, all from frees.

Points from Andy Moran, Keith Higgins and Alan Freeman put Mayo back in the hunt but a goal was going to be needed to reel in the Dubs. Step forward Mayo’s marksman extraordinaire. He never flinched as he faced up to Stephen Cluxton, cooling slotting the ball past the greatest ‘keeper of his generation to leave a single point between the sides. Moran scored the equaliser and Mayo lived to fight another day. 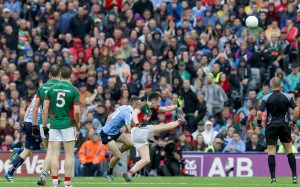 Cillian O’Connor lets fly with his right boot to score that incredible equalising point against Dublin in the 2016 All-Ireland Final.
Picture: INPHO/Morgan Treacy

September 18, 2016, Mayo v Dublin, All-Ireland Senior Championship Final, Croke Park
There are so many outstanding moments in Cillian O’Connor’s career in the Green and Red of Mayo but few can match that majestic equalising point in the All-Ireland Final in 2016.
The Ballintubber man had been made captain by new Mayo boss Stephen Rochford and he certainly repaid his manager’s faith by showing leadership when it was needed most.
In a game that is best remembered for Mayo’s cursed luck that saw them concede two own goals in the first-half, O’Connor epitomised his team’s never-say-die attitude, scoring seven of Mayo’s total, including that incredible equaliser. It was scored in the 77th minute from all of 50 yards in miserable weather conditions and the Ballintubber man even had the presence of mind to shimmy inside his opposition number before letting fly with the right boot.
In a word: majestic. 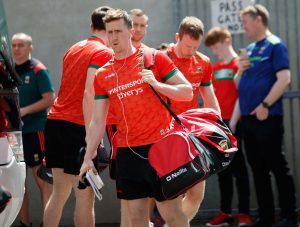 Cillian O’Connor arrives in Fitzgerald Stadium, Killarney on July 14, 2019, the day he became the highest scorer in the history of the All-Ireland Senior Football Championship.
Picture: INPHO/James Crombie

July 14, 2019: Mayo v Kerry, All-Ireland Quarter-Final Phase 1, Killarney
This is a game Mayo fans will want to erase from the memory bank. Kerry, smarting from their defeat to the Connacht men in the National League Final a few months earlier, served up a dish of ice-cold revenge, beating a tired Mayo side by 1-22 to 0-15.
The only positive to take away from Killarney on that scorching July Sunday was Cillian O’Connor’s six points, which propelled him past Kerry legend Colm Cooper at the top of the GAA Senior Championship scoring charts.
In just 55 championship games (30 fewer than Cooper), O’Connor has nailed 25-297, an average of almost seven points per game. O’Connor’s return from play is equally impressive – he has struck 16-62 from play, an average of 2.04 points per game.
It is an incredible scoring record from an expert marksman whose contribution to Mayo football over the past decade has sometimes been underappreciated.
So happy birthday Cillian, thanks for so many magical memories, and here’s to many more scoring exploits when the GAA action resumes in, hopefully, the not-too-distant future.