History shows Dr Mick has always been ahead of the curve 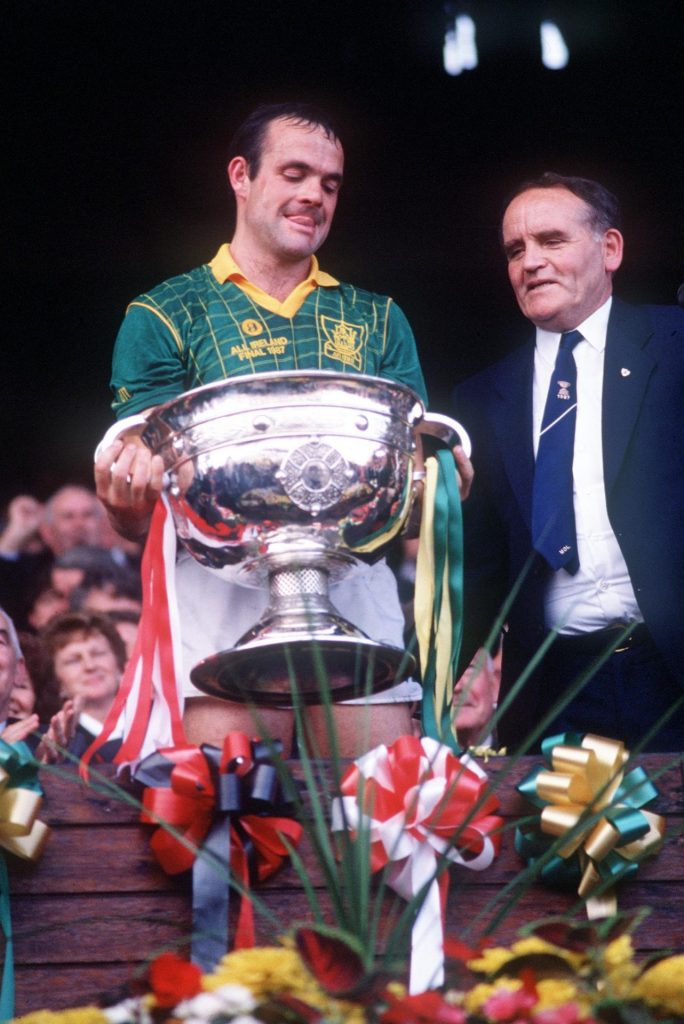 We’ve been hearing plenty about peaks and plateaus lately from the likes of Dr Tony Holohan, but another doctor much closer to home was talking about such things all of 35 years ago.

He was ahead of the curve if you like.

In fact, it’s uncanny how much of the speech given by Mick Loftus to mark his anointing as GAA President resonates just as strongly in this extraordinary time of the coronavirus. His comments had a different context undoubtedly, but the values espoused by the Crossmolina GP one spring afternoon in 1985 seem as worthy of aspiring to now as they did back then. Even more so perhaps given the life and death nature of the current emergency.

“The strength that we have gathered on this plateau must now be harnessed for the tests that are ahead.”

It’s just as easy to imagine that last sentence from the mouths of Dr Holohan or Dr Cillian de Gascun or Simon Harris or Paul Reid at one of the Department of Health’s daily press briefings about the Covid-19 pandemic. Looking back, Loftus seemed almost prophetic in his address.

“Our service must properly inculcate ideals; ideals of discipline, of fair play, of good social behaviours, of community spirit, including a reasoned and practical love for, and pride in the best traditions of our Irish people,” he urged. Again, as applicable now to a society of which unprecedented self-control is being sought from state authorities, as it was to the GAA then, and to a society now trying to comprehend in excess of 1,400 deaths associated to a virus no one had even heard about six months ago. Now is not the time for complacency. A lot done, more to do as Bertie might have said.

Speaking of which, it was despite the ‘pull’ of the Fianna Fáil Ard Fheis taking place on the same weekend that political stalwarts Sean Flanagan, a former Mayo teammate, Minister of Health and by now an MEP, and Denis Gallagher TD turned up to the Town Hall on Teeling Street instead, in support of Dr Loftus and his coronation. It was a big deal; he who turned 90 last August remains the only Mayo man to have been elected president of the GAA and one of only five from Connacht to have been bestowed the honour.

Aged 55 when taking up the office, it was Mick’s third time to seek election as president, his dream actually being realised 12 months previous when he topped the poll at Congress in Belfast. That gave him a full year to carefully consider his inaugural oration in which he outlined his vision for the Association under his direction.

“We must realise there is an urgent need to study again the present state of the GAA and to plan for its role in an emerging modern society,” said Loftus, who noted the “huge bulge in the graph of our young population” and their surge to the cities and towns of the eastern seaboard in particular. His intent was that they would not become the forgotten.

“Our interpretation of patriotism is the service of our people. And wherever our people live, or migrate, or indeed emigrate, it is the business, as it is indeed the benefit of the Association, to be active in their service.”

Thirty-five years later, the Association is continuing to live up to Dr Mick’s vision, proving itself more than active in its service to its members and communities.

Stories are by the dozen of how GAA clubs countrywide and indeed worldwide have been assisting the more vulnerable in their localities during the Covid-19 lockdown, but they became lost in a swamp last week when the current president felt the need to go public and distance the Association entirely from reports that the training of inter-county teams was something he, or it, had discussed with the Department of Transport, Tourism and Sport.

John Horan described the Sunday Independent’s story as “irresponsible” and said he was “aghast” as to where it had come from, telling Sean O’Rourke on RTÉ Radio 1 that there’d be no inter-county activity before club activity.

“It caused a nervousness among membership throughout the country: ‘are we as an organisation putting the inter-county player ahead the club player?’” Horan said to the nation, adding: “We’re regularly in contact with government departments and at no stage have we discussed the return to training of inter-county players with any government department.”

It’s a tough job, being top dog of the GAA, as challenges, albeit of a very different kind, that confronted Mick Loftus all those years ago demonstrate too. 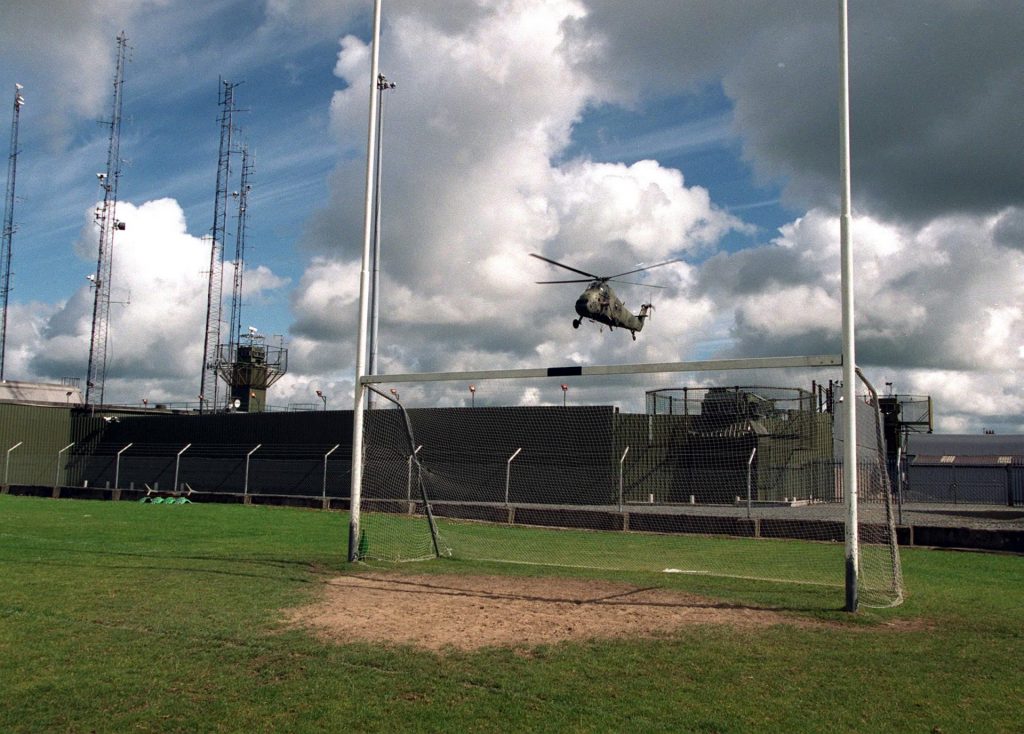 A British Army helicopter landing at the barracks adjoining the home ground of Crossmaglen Rangers GAA Club. The neighbours had a particularly fractious relationship at the time Mayo’s Mick Loftus was elected president of the GAA. Picture: INPHO/Andrew Paton

Writing in the Irish Independent, the day after Dr Mick’s inauguration, Donal Carroll described the Congress as “ultra-conservative” and said the GAA had stayed “true to its fashion”, after only 14 out of 87 motions tabled were passed. Of those 14, three were related, not to the games directly, but to the Troubles, including that the GAA would pressure the Irish Government to demand that the British Government have the British Army vacate property belonging to Crossmaglen Rangers GAA Club. And that there would be strong protests against the prevention of Long Kesh prisoners playing or practising Gaelic games.

It puts today’s debates about whether to kick the ball forward or backward from a line-ball into perspective.

But Mick Loftus, who had just two years earlier been named Mayo Man of the Year for, among other things, his stellar work in developing community facilities for Crossmolina and its environs, knew not only the importance, but the richness accrued from casting aside differences. So it’s no wonder that Carroll also noted that 1985’s Congress was one “which went much of the way to dispelling the notion that the GAA leans towards sectarianism”, when taking his seat alongside Dr Tom McDonnell, Bishop of Killala, was the Church of Ireland’s Dean Spence.

Spence, who was representing Bishop John Coote-Duggan (who himself had attended the banquet that had spilled into two rooms of the Downhill Hotel the night before), remarked that the GAA’s attendance at St Michael’s for the early Service that morning had shown it was an association which embraced all creed and all classes.

“At whatever level we operate,” Loftus urged the delegates, “let us make it a community effort, a togetherness, a sharing of work, a shedding of differences, a shunning of any personal grudge.”

1980s Ireland mightn’t have been the most affluent — never mind still but a cub, the Celtic Tiger hadn’t even been conceived — but even then the GAA president could foresee the impact of materialism and its potential harm to the overall aims of the Association. 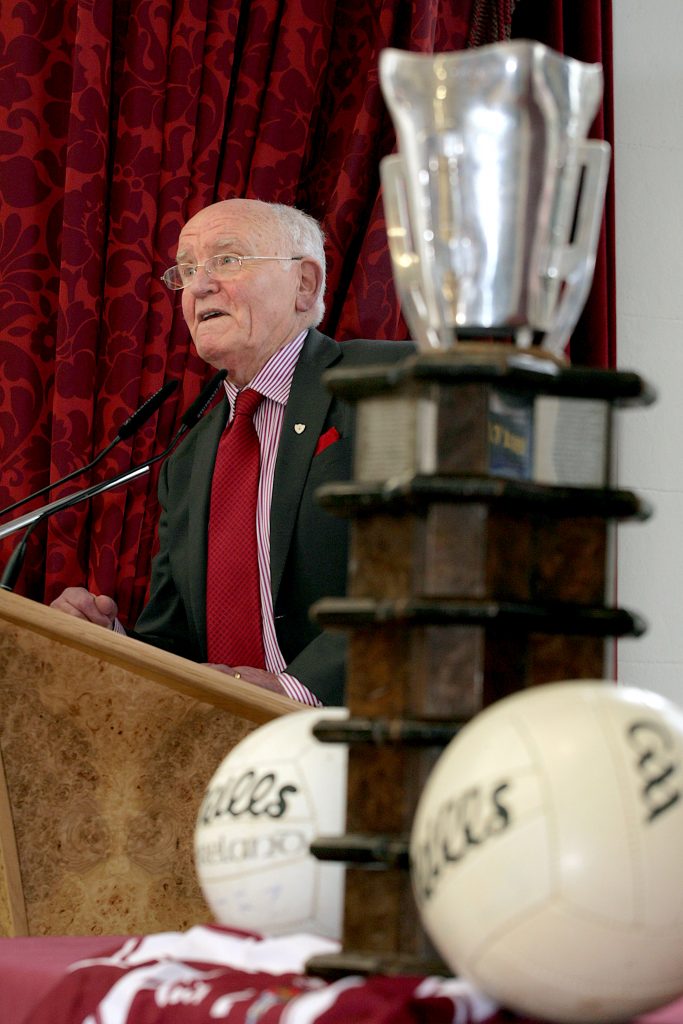 “It is the growing danger of turning our backs on things of the spirit — not just of the religious spirit, but of what one might call the spirit of excellence and of high mindedness,” said Dr Mick, noting that the challenge of materialism “will often appear in the form of a question: ‘what am I going to get out of it?’”

“The future will be ours only if we win it for coming generations by planning, by endeavour, by service,” he declared.

Mick Loftus wasn’t just a handy player in his day, captaining the second of the two All-Ireland junior winning teams he appeared on, and picking up an All-Ireland senior medal as a panellist on Mayo’s 1951 team, but he graduated to become a referee of the highest calibre too, officiating five Connacht SFC finals and the All-Ireland senior finals of 1965 and ’68.

And it was none other than Bishop McDonnell himself who, at Congress, underlined the new president’s fortitude when proclaiming that, if folklore could be believed, he had sidelined seven Offaly men in his refereeing career.

A man for the big call, on and off the pitch.