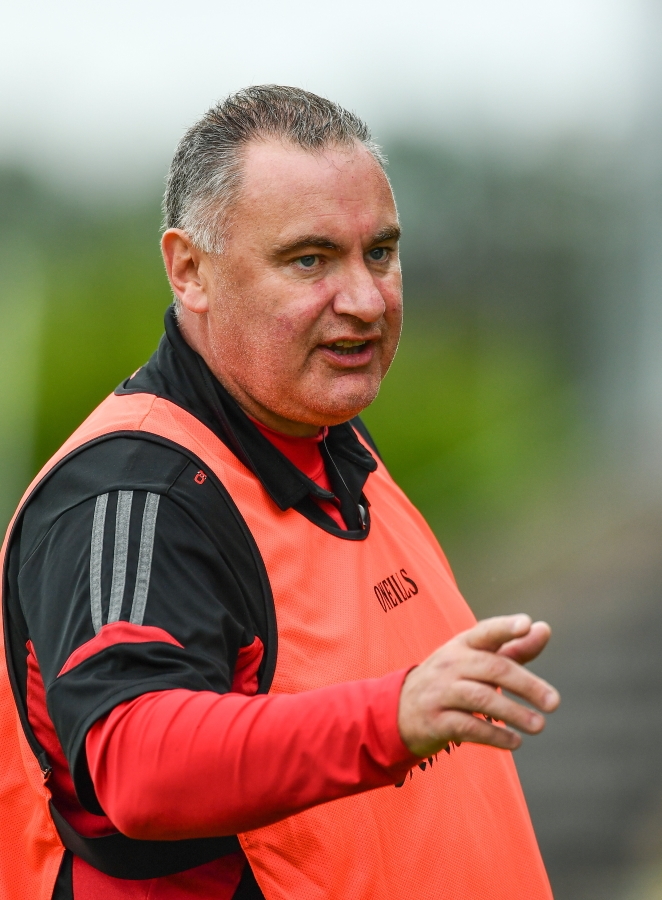 Adopted Ballyhaunis man Frank Browne is now coaching the ladies footballers of Galway but it still upsets him to hear about the internal rumblings within the game in Mayo. Picture: Sam Barnes/Sportsfile

Not too many people have crossed the border at Ballindine and changed colours in the Galway versus Mayo battle, but former Mayo manager Frank Browne says he is hell-bent on bringing TG4 All-Ireland Senior glory to Galway.

Perhaps, as a Wexford native, the switch is a little easier for Browne, who took up the offer from Galway manager Tim Rabbitt to coach his side in 2020.

But after 26 years living in Ballyhaunis, Browne feels at home in County Mayo and his move caused a few eyebrows to be raised in the West.

Fresh from defeat to Dublin in last September’s All-Ireland final, Galway boss Rabbitt was clearly looking for a fresh view on his troops.

In Browne, he has a kindred spirit, a manager who brought a Connacht team to the cusp of TG4 All-Ireland success, although his bond with the 2017 Mayo Ladies could have been an issue for some. Instead, he met an open-minded Galway squad, who welcomed him into their family with glee.

“Myself and Tim were having a chat and he thought I could bring something slightly different to the set-up. Tim did as every manager does after you lose an All-Ireland – you look for another one or two per cent. I’m hoping I can bring that to Galway. What that is I’m not 100 per cent sure yet. I have a different style to Tim, a different pair of eyes, a bit of experience,” said Browne.

“One of the possible issues was how girls I’d have done homework on, trying to stop them succeeding, would react to the guy coming over the border. But it was brilliant, the impression they gave me was, ‘if you’re with us and you can help us, then brilliant. You’re in our gang. Let’s go for this’. There was no issue whatsoever.

“There is a genuine belief that we can win the All-Ireland, and the impression I got was that they’ll have benefited hugely from last year and the experience of playing in Croke Park. It’s not just another pitch, even going to watch a game there is a pilgrimage. It’s a special place in our hearts, but they know what to expect now. They’ll embrace their next shot up there.”

Since Browne finished up as Mayo Ladies senior manager, there has been plenty of impressive performances from Peter Leahy’s side, but it has also been a time not without controversy.

Only six of that 2017 All-Ireland final team played senior championship for Mayo last year and Browne’s view is definitive on the matter – it’s time to bury the hatchet for the good of the players.

“I think it’s terribly sad what’s going on in Mayo. There are a lot of power battles going on, but people need to remember this is about people playing football. At the end of the day everyone involved in the LGFA is an amateur volunteer. We have to remember that. People shouldn’t be hurt, we should be creating joy in this game.

“Yes, there are issues, sort them out and move on. In the end up, it’s the players that will suffer. Is it complex? It probably is. Are there serious issues? I’m sure there are. But if Martin McGuinness and Ian Paisley could shake hands after 30 years of conflict in Northern Ireland, surely they can sit down and sort out these issues like adults. 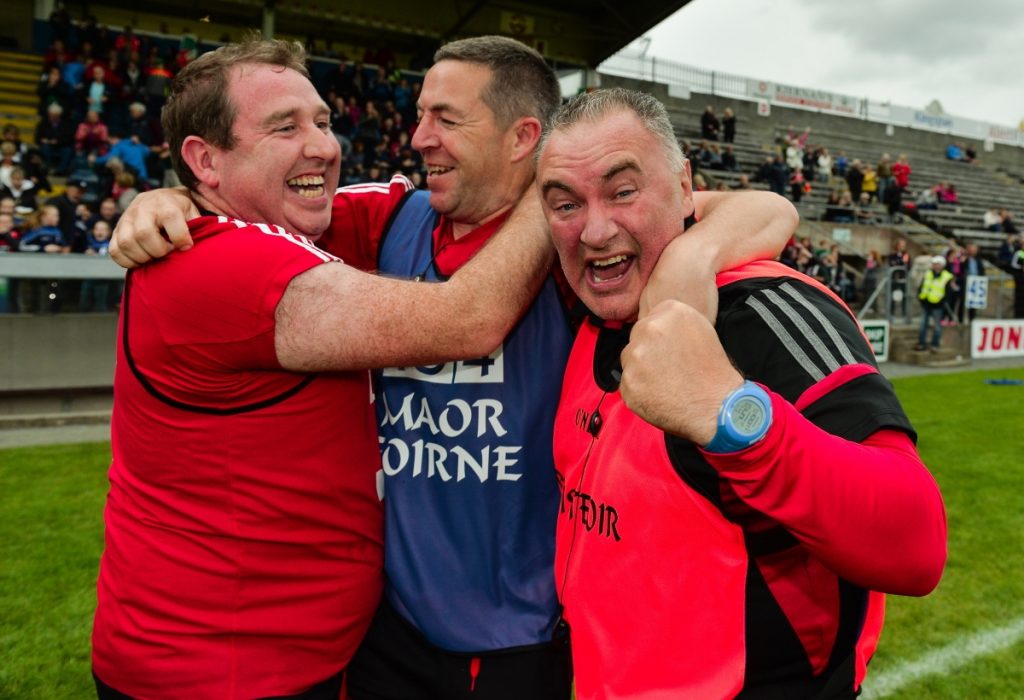 “That might sound very simplistic of me, but someone like John O’Mahony, ask someone like him to mediate it. Or go to Sport Ireland and John Treacy and ask for help. I’d say every Gaelic Games person in the country would agree.”

In between his time in Mayo and starting with Galway this year, Browne also took charge of the Dublin camogie team in 2019. As a Wexford man, Browne was raised on both the small and big ball, and the chance to return to hurling was a real attraction, although he says he was ‘disappointed’ to see his time in Dublin end prematurely.

With contact to his new panel confined to virtual get-togethers, Browne and Galway had a bit of variety last Saturday evening when they faced Cork in an online charity challenge for the Laura Lynn Children’s Hospice.

“Everything we raise is going to a wonderful cause in Laura Lynn Children’s Hospice,” said Browne. “If you can help out in any way, it would be greatly appreciated.” 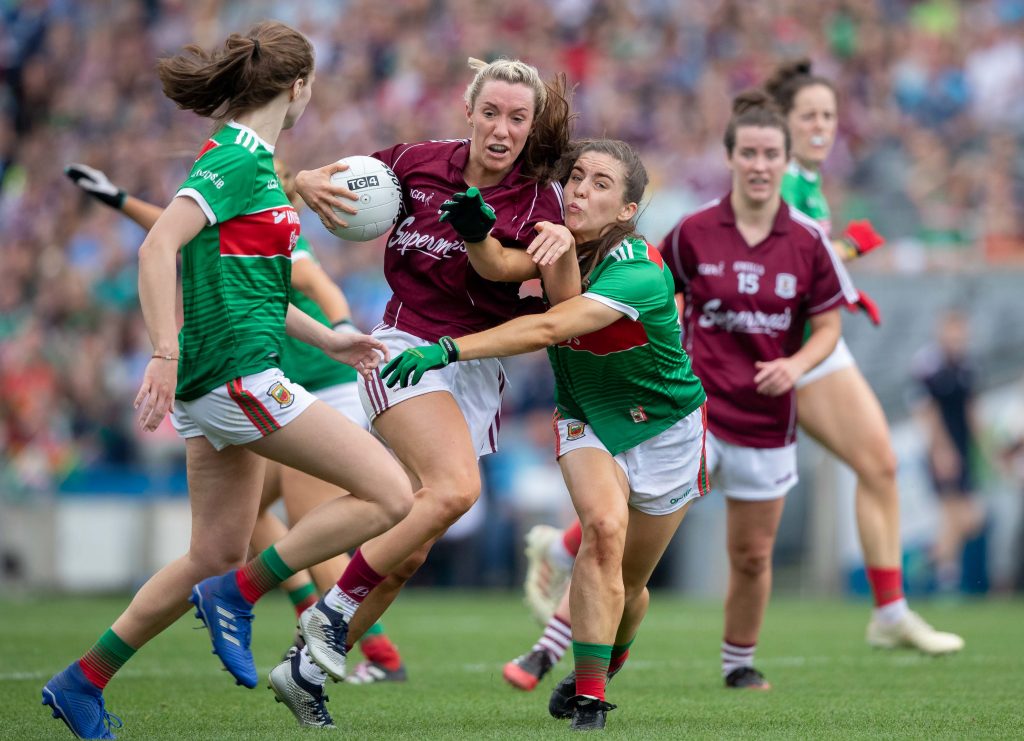 It remains to be seen when Browne gets to challenge Mayo in competitive action. The combination of Leahy, Rabbitt and Browne on a sideline is an interesting prospect, but whatever side of the line he now stands, he has huge respect for the Green and Red.

“The league this year was building to a brilliant conclusion. It would probably have come to us playing Mayo in what would essentially have been a League semi-final, for the right to play Cork in the final. That would have been brilliant.

“The angle of my history with Mayo was bound to be at the heart of it, but it’s not an issue for me. My job now is to try and help Galway win the All-Ireland. Please God we’ll play Mayo in the Connacht championship at some stage in the not so distant future and I’ll be doing my very best for Galway.

“But when it’s all over, I’ll meet Sarah Rowe and I’ll meet the Kellys and people I soldiered with and we’ll have a cold bottle of beer. That’s what Gaelic Games people do, we’ll go as hard as we can for the win, but we shake hands afterwards. We respect each other for what we’re trying to do.”