Who is Jemima Burke, the Mayo journalist whose questioning of Dr Tony Holohan went viral… 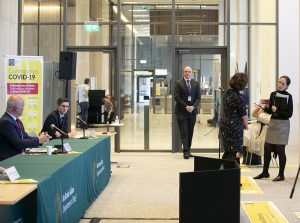 It’s fair to say that before she took the microphone at last Wednesday’s daily Covid-19 press briefing, few in Co Mayo would have heard of Jemima Burke. Fewer still would have heard of the publication she purported to represent, The Western News, and some confused it with this publication, prompting a deluge of emails and social media messages to the Western People condemning Ms Burke’s intemperate questioning of Chief Medical Officer Dr Tony Holohan.
Ironically, Ms Burke’s byline had appeared on the front page of the Connaught Telegraph a day earlier on a story about the tragic death of Sally Maaz, the Syrian-born teenager from Ballyhaunis whose case the journalist sought to highlight during her chaotic cameo in Dublin.

Questions will inevitably be asked as to how a journalist gained access to a national press conference while citing an apparently non-existent publication or, indeed, how she was able to travel from Castlebar to the capital at a time when everyone is supposed to be obeying strict travel restrictions to stop the spread of Covid-19.
Be that as it may, Jemima Burke’s irate grilling of the imperturbable Dr Holohan – footage of it has since gone viral – is just the latest episode in her family’s long-running history of public protests and high-profile legal actions.
Jemima is one of ten children – all with biblical names – whose parents, qualified electrician Sean and Martina Burke, operate a ‘Christian School’ at Cloonsunna, Castlebar.
“Do we want our children to become educated atheists, embracing the values of an education system from which God is excluded?” ask the Burkes on their website. “Education is not neutral. At Burke Christian School, we believe it is imperative that children receive a godly education – providing a foundation for life.” 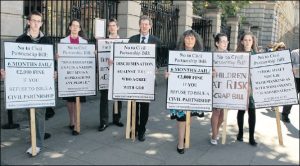 Sean and Martina Burke and several of their children protesting outside Leinster House some years ago.

In an interview with The Irish Times in July 2010, the family said they did not belong to any particular religious sect.
“We’re just a Christian church,” Martina, a qualified schoolteacher, told Irish Times reporter Kathy Sheridan.
Ms Sheridan had encountered several members of the Burke family protesting outside Dáil Éireann at a time during the financial crash when protests were commonplace on Kildare Street. The family carried placards bearing such messages as ‘Thou shalt not lie with mankind as with womankind. It is abomination. Leviticus 18:22’.
The family explained how they spent eight to nine hours protesting outside the Dáil and read the Bible on their long journeys to and from Castlebar each day.
Ms Sheridan vividly described an encounter between the Burkes and a passer-by.
When challenged by a pinstriped cyclist, 21-year-old Enoch Burke takes him on.
“Well, where does Aids begin?” asks Enoch, following up with HIV figures from St James’s Hospital, to “prove” that homosexuals started it.
“God help you,” says the cyclist mournfully.
Since then, several members of the Burke children have been involved in legal actions against NUI Galway where they have been students.
Isaac, Kezia, Ammi and Enoch Burke were banned for life from all student societies at the university on November 10, 2014, a decision they have challenged in the courts. That case is understood to be ongoing. 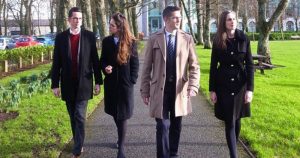 Isaac, Kezia, Ammi and Enoch Burke have taken legal action against NUIG after they were banned for life from all student societies.

Earlier this year, Isaac, a PhD mathematical student, won an action against NUI Galway over a delay in scheduling his final ‘viva’ exam, which delayed his graduation and damaged his employment prospects.
The 27-year-old represented himself in the proceedings and was awarded damages of €13,035 by Judge Raymond Groarke at Galway Circuit Civil Court for breach of contract.
The Burke siblings have a history of academic achievement and have won numerous public speaking competitions in Ireland over the years. Just last month, Jemima’s younger brother, Simeon, was an All-Ireland finalist in the 2020 Irish Times Debating Competition. Former finalists include President Michael D Higgins, Mary Robinson and the late broadcaster Marian Finucane.
Like the rest of his siblings, Simeon was home educated and has followed in their footsteps to NUI Galway where he is studying Civil Law. He was the only finalist in the debate representing a university outside of Dublin.
But the Burke siblings are as well known for their acts of public protest as they are for their academic achievements. While Jemima was quizzing Dr Holohan last week, her brother Josiah and other family members were protesting outside Castlebar Garda Station and at the Market Square over alleged failings in the treatment of patients at Mayo University Hospital during the Covid-19 outbreak. It’s not the first time they have protested in their hometown. In 2017, they took to the streets bearing placards denouncing homosexuality while the LGBT Pride Parade was taking place.
Members of the Burke family have also attended the High Court in recent weeks for the legal challenge taken by journalists John Waters and Gemma O’Doherty against the State’s response to Covid-19.
In the wake of her fractious encounter with Dr Holohan, some questioned Jemima Burke’s qualifications as a journalist. She is a graduate in journalism from NUI Galway and was one of a small number of young reporters honoured by the Press Council of Ireland in 2018 for the quality of her work. She has frequently published articles in the Connaught Telegraph as has her brother Josiah.
It has been a decade of protest for the Burkes since they first encountered Kathy Sheridan outside the Dáil and Jemima’s actions last week were in keeping with the family tradition.
“Of course there are a thousand other things we could be doing. I could cry coming up,” Martina told Kathy Sheridan in 2010. “But there’s a lot of unrest in the country, and the politicians are not representing the people.”
Whether the Burkes represent the people is certainly open to debate and not too many would conform to their very extreme interpretation of ‘Christian’ ideology.
When Jemima rose to her feet at last Wednesday’s press briefing, she cited a publication most people had never heard of. However, there was a Western News published in Connacht in the late 1800s and early 1900s. It was based in Ballinasloe in Co Galway and went out of print in 1926. One suspects the Burkes would have been more at home in the Ireland of 1926 than 2020.